COLLEGE PARK, Md. – Nearly a third of all terrorist attacks from 1970 to 2008 occurred in just five metropolitan U.S. counties, but events continue to occur in rural areas, spurred on by domestic actors, according to a report published today by researchers in the National Consortium for the Study of Terrorism and Responses to Terrorism (START), a Department of Homeland Security Science and Technology Center of Excellence based at the University of Maryland.

The research was conducted at Maryland and the University of Massachusetts-Boston.

The largest number of events clustered around major cities:

While large, urban counties such as Manhattan and Los Angeles have remained hot spots of terrorist activities across decades, the START researchers discovered that smaller, more rural counties such as Maricopa County, Ariz. – which includes Phoenix – have emerged as hot spots in recent years as domestic terrorism there has increased. 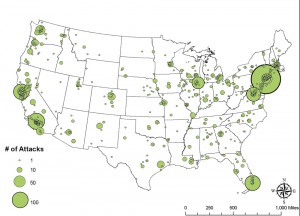 The START researchers found that 65 of the nation’s 3,143 counties were “hot spots” of terrorism.

They defined a “hot spot” as a county experiencing a greater than the average number of terrorist attacks, that is, more than six attacks across the entire time period (1970 to 2008).

“Mainly, terror attacks have been a problem in the bigger cities, but rural areas are not exempt,” said Gary LaFree, director of START and lead author of the new report.

“The main attacks driving Maricopa into recent hot spot status are the actions of radical environmental groups, especially the Coalition to Save the Preserves. So, despite the clustering of attacks in certain regions, it is also clear that hot spots are dispersed throughout the country and include places as geographically diverse as counties in Arizona, Massachusetts, Nebraska and Texas,” LaFree added.

The complete report Hot Spots of Terrorism and Other Crimes in the United State, 1970 to 2008, is available online: https://ter.ps/9j.