The heart’s inner workings are mysterious, perhaps even more so with a new finding. Engineers at the University of Washington have discovered an electrical property in arteries not seen before in mammalian tissues.

The researchers found that the wall of the aorta, the largest blood vessel carrying blood from the heart, exhibits ferroelectricity, a response to an electric field known to exist in inorganic and synthetic materials. The findings are being published in an upcoming issue of the journal Physical Review Letters.

“The result is exciting for scientific reasons,” said lead author Jiangyu Li, a UW associate professor of mechanical engineering. “But it could also have biomedical implications.” 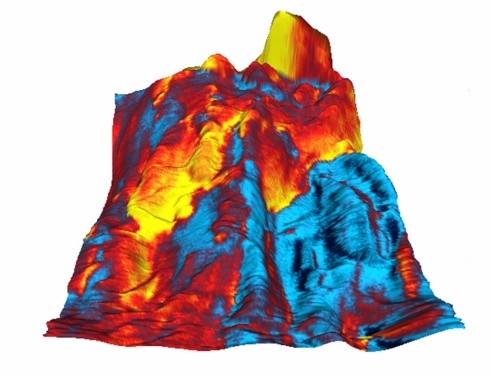 In the new study, Li collaborated with co-author Katherine Zhang at Boston University to explore the phenomenon in biological tissues. The only previous evidence of ferroelectricity in living tissue was reported last year in seashells. Others had looked in mammal tissue, mainly in bones, but found no signs of the property.

The new study shows clear evidence of ferroelectricity in a sample of a pig aorta.  Researchers believe the findings would also apply to human tissue.

In subsequent work, yet to be published, they divided the sample into fibrous collagen and springy elastin and studied each one on its own. Pinpointing the source of the ferroelectricity may answer questions about how or whether it plays a role in the body.

“The elastin network is what gives the artery the mechanical property of elasticity, which of course is a very important function,” Li said.

Ferroelectricity may therefore play a role in how the body responds to sugar or fat.

Diabetes is a risk factor for hardening of the arteries, or atherosclerosis, which can lead to heart attack or stroke. The team is investigating the interactions between ferroelectricity and charged glucose molecules, in hopes of better understanding sugar’s effect on the mechanical properties of the aortic walls.

Another possible application is to treat a condition in which cholesterol molecules stick to the inside of the channel, eventually closing it off.

He cautions that medical applications are still speculations, and require more research.

“A lot of questions remain to be answered, that’s an exciting aspect of the result,” Li said.

Co-authors are Yuanming Liu and Qian Nataly Chen at the UW, and Yanhang Zhang and Ming-Jay Chow at Boston University.

The research was funded by the National Science Foundation, the National Institutes of Health, the Army Research Office, the UW’s Center for Nanotechnology and a NASA Space Technology Research Fellowship.