EAST LANSING, Mich. — A team of researchers led by Michigan State University has discovered an overachieving plant enzyme that works both the day and night shifts.

The discovery, featured in the current issue of Proceedings of the National Academies of Science, shows that plants evolved a new function for this enzyme by changing merely one of its protein building blocks.

The enzyme, ATP synthase, usually works the day shift, serving as a key player in storing energy created through photosynthesis in the chloroplast. When the sun goes down most of these enzymes switch off to prevent energy from leaking out.

The newly changed protein building block, or subunit, allows this enzyme to do another job once the sun goes down and photosynthesis stops, said David Kramer, Hannah Distinguished Professor of Photosynthesis and Bioenergetics. 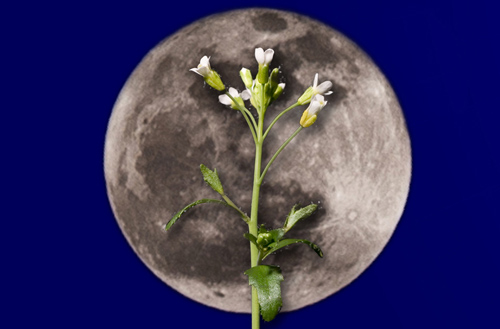 “By exchanging this one building block, the enzyme gains a new function in the dark, in the roots.” he said. “It’s like a food processor. With one attachment it chops food. Swap it for another, and it kneads bread dough.”

The building block on which the researchers focused is called gamma, a component of ATP synthase. There are two forms of gamma, gamma-1 and gamma-2. When researchers removed gamma-1, photosynthesis was completely stopped. When gamma-2 was removed, the plant could not make normal root hairs (the part of the root that takes up nutrients.) On the other end of the spectrum, plants engineered to produce lots of gamma-2 made very long root hairs.

So, the seemingly small change not only allows the enzyme to pick up an additional shift, but to also work a completely different job – from storing energy during the day to transporting energy in the roots at night.

This particular enzyme also functions as a regulator of photosynthesis, controlling how much energy plants consume. Too much light causes damage while too little results in low energy, which keeps the plants from growing to their full potential.

Kramer’s next phase of research in this realm will investigate regulating the enzyme’s effect on increasing photosynthesis, which could potentially lead to more efficient plants and algae.