Examining The Changing Face of Christianity

U of T leading centre for study of global Christianity

A century ago, 80 per cent of the world’s Christians lived in Europe and North America; today, nearly 70 per cent live in Africa, Asia, and Latin America, making Christianity a predominantly non-Western religion.

A critical mass of scholars who are looking into the implications of this shift has made the University of Toronto a leading centre for the study of global Christianity.

Christianity today has more than 2.2 billion adherents worldwide. The majority are overwhelmingly poor, displaced from rural villages into overcrowded cities in search of work, and adhere strictly to the word of Scripture, which can command their loyalty far more than state or society.

“We focus on the politics of global Christianity, which includes Pentecostalism and other forms of Charismatic Christianity, from historical and ethnographic perspectives,” said anthropologist Kevin O’Neill in the Department for the Study of Religion. 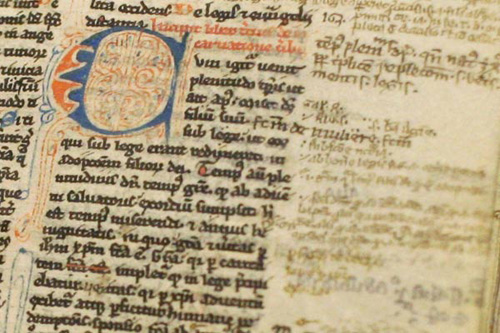 This illuminated Christian manuscript is part of the collection at U of T's Thomas Fisher Rare Book Library. (Photo by Caz Zyvatkauskas)

O’Neill is one of seven scholars exploring Pentecostalism from an empirical perspective. He is joined by Simon Coleman, Pamela Klassen and Ruth Marshall from the Department for the Study of Religion, Girish Daswani and Valentina Napolitano from the Department of Anthropology, and the Department of Geography’s Ju Hui Judy Han. Rather than a theological approach that might be found in a seminary or divinity school, the group thinks about Christianity as a cultural and social process that directly impacts how people live their lives.

“We do not view Pentecostal Christianity as a private matter, as many people understand religion to be,” said O’Neill, “but something rather public that affects how people relate to the economy, politics and questions of security. Pentecostalism has become the world’s fastest growing religious movement. One cannot help but be interested in a community of 500-million people and the diversity that exists within it.”

Each of the scholars observes Christianity to see how its adherents live their faith and what their faith means for their society. For example, Klassen has studied the influence of Pentecostal and charismatic healing rituals in mainstream Protestant denominations, and found that some Christians in downtown Toronto believed their God could not only heal but raise the dead.

“We want to better understand the cultural contexts in which people believe and the social relationships that emerge from their beliefs,” said O’Neill. “Pentecostalism is one of the world’s most politically influential religions. Scholars have only just begun to consider its immediate effects and historical roots.”

For his research, he shadows chaplains in Guatemala’s maximum security prisons. Han travels alongside Korean missionaries on the China-North Korea border and Marshall visits with ‘spiritual warriors’ in Nigeria.

Although their approaches are based in each individual’s disciplinary background, O’Neill says all would agree that global Christianity cannot be fully recognized or understood by social sciences alone, and requires a philosophical framework as well.