Evolution of Religious Patriarchy as a Mate-Guarding Strategy?

One of the largest and longest studies in a traditional African society sheds light on religious practices and cuckoldry. Genetic data suggest religious patriarchy is directly analogous to the mate-guarding tactics used by animals to ensure paternity.

Religious practices that strongly control female sexuality are more successful at promoting certainty about paternity, according to a study published in the June 4, 2012 issue of the Proceedings of the National Academy of Sciences.

In an interdisciplinary collaboration, a group of researchers around biological anthropologist Beverly Strassmann from the University of Michigan and University of Arizona geneticist Michael Hammer analyzed genetic data on 1,706 father-son pairs in a traditional African population – the Dogon people of Mali, West Africa – in which Islam, two types of Christianity and an indigenous, monotheistic religion are practiced in the same families and villages. 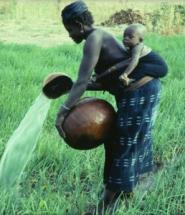 They found that the indigenous religion allows males to achieve a significantly lower probability of their spouses giving birth to children fathered by other men. The researchers discovered that this so-called cuckoldry occured much less frequently in families adhering to the indidigenous religion: 1.3 percent versus 2.9 percent in the general population. In the traditional religion, menstrual taboos are strictly enforced, with women exiled for five nights to uncomfortable menstrual huts.

According to Strassmann, the religion uses the ideology of pollution to ensure that women honestly signal their fertility status to men in their husband’s family. “When a woman resumes going to the menstrual hut following her last birth, the husband’s patrilineage is informed of the immanency of conception and cuckoldry risk,” Strassman said.

“Precautions include postmenstrual copulation initiated by the husband and enhanced vigilance by his family.” Not all Dogon practice the social enforcement of the menstrual hut, Hammer said, and paternity rates are related to how strictly the rules of fidelity are enforced.

“It is perhaps not all too surprising that we found a correlation between enforcement of fidelity rules and percentages of paternity, but we were a bit surprised to find measurably increased rates of cuckoldry with more recent non-traditional religious practices – Islam and Christianity – which enforce fidelity rules less strictly than the traditional Dogon belief system.” 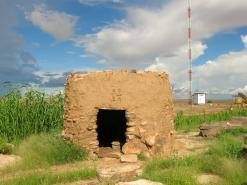 Indicative of cultural change, a cell phone tower rises behind a menstrual hut used by Dogon women. The Dogon, a group living along the Cliffs of Bandiagara in Mali West Africa, have a cultural practice in which women sleep in a hut for five nights during their menses. The menstrual taboos are enforced by the indigenous religion and the huts have been abandoned by converts to Islam or Christianity. (Photo: Beverly I. Strassmann)

Across all four of the religions practiced by the Dogon people, Strassmann and colleagues detected father-son Y DNA mismatches in only 1.8 percent of father-son pairs, a finding that contradicts the prevailing view that traditional populations have high rates of cuckoldry. A similar rate of cuckoldry has been found in several modern populations, but a key difference is that the Dogon do not use contraception. The study, which was supported by funding from the National Science Foundation, is part of Strassmann’s ongoing, 26-year study of the Dogon people.

“The major world religions sprang from patriarchal societies in which the resources critical to reproduction, whether in the form of land or livestock, were inherited from father to son down the male line,” Strassmann and her colleagues write. “Consistent with patrilineal inheritance, the sacred texts set forth harsh penalties for adultery and other behaviors that lower the husband’s probability of paternity. The scriptures also place greater emphasis on female than on male chastity, including the requirement of modest attire for women and the idealization of virginity for unmarried females.”

While previous studies have examined the evolutionary biology of patriarchy through primate antecedents or cultural factors, the current study is the first to investigate whether religions that more strongly regulate female sexuality are more successful at limiting the incidence of cuckoldry.

“Although world religions do not have menstrual huts, they do share many tenets that may foster cuckoldry avoidance,” the authors write. “For example, in Judaism, menstrual purity laws increase coital frequency around the time of ovulation. In Islam, paternity confusion is prevented by the Qur’an’s rule that, after divorce, a woman must wait for three menstrual periods before remarrying. In the United States, frequent church attendance and belief that the Bible is the word of God were the two most robust predictors of lower rates of self-reported extra-partner copulations.”

The red color of the fibers worn by this Dogon masked dancer symbolizes menstrual blood. (Photo: Beverly I. Strassmann)

In short, Strassmann and colleagues maintain, the ideological and tactical similarities between these world religions and the Dogon religion have arisen in response to the same biological pressures.

Religious patriarchy is directly analogous to the mate-guarding tactics used by animals to ensure paternity.

“To our knowledge, this is one of the largest longitudinal studies in an African population,” said Hammer, an associate professor in the UA’s department of ecology and evolutionary biology and a research scientist at the UA’s Arizona Research Laboratories. “Having records over multiple generations is very unusual. Beverly has been living with the Dogon for decades, she has built close relationships and really knows their concerns.”

Strassmann is the lead author of the study, which was co-authored by Hammer and Tatiana Karafet of the UA’s Arizona Research Laboratories; Nikhil Kurapati, Brendan Hugg, and Brenda Gillespie, all at the University of Michigan; and Erin Burke at Yale University. 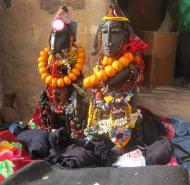 Statuettes adorned for the funeral rites of a Dogon woman in Mali, West Africa. Menstrual huts, masked dancing, and the traditional funeral rites are customs embedded in the indigenous Dogon religion. (Photo: Beverly I. Strassmann)

– By Diane Swanbrow and Daniel Stolte