COLUMBIA, Mo. ­— Two-thirds of U.S. adults now use at least one mobile media device in their daily lives, according to a national survey recently conducted by the Reynolds Journalism Institute (RJI) at the University of Missouri School of Journalism. The RJI survey found that news consumption ranks fourth among reasons people use mobile devices, behind interpersonal communications, entertainment, and Internet usage for information not provided by news organizations. Despite the large number of mobile device users, Roger Fidler, the program director for digital publishing at RJI, says that mobile news products do not appear to be replacing printed newspapers as quickly as was earlier predicted.

“The increased use of mobile devices does not yet appear to have accelerated the switch from print to digital news consumption as earlier surveys suggested,” Fidler said. “Forty percent of mobile device users indicated in our survey that they still subscribe to printed newspapers and news magazines. This percentage was almost identical for non-users of mobile devices.” 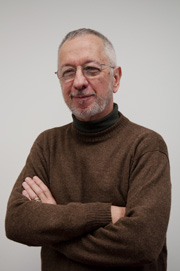 The RJI survey interviewed more than 1,000 randomly selected respondents. The survey divided mobile media devices into four categories: large tablets, small tablets, e-readers, and smart phones. More than 21 percent of the respondents said they now use large tablets, a category of mobile devices that entered the market just two years ago. Results showed that Apple is dominating the large tablet market, with more than 88 percent of large tablet users owning an iPad, while Amazon is dominating the small tablet and e-reader markets. The survey also showed that smartphones and large media tablets are the two most popular devices for consuming news. Fidler says that news organizations should consider these numbers when targeting their audiences.

“Amazon and Apple have built quite a bit of brand loyalty from their customers,” Fidler said. “Forty-four percent of Apple iPhone owners also own large media tablets, 96 percent of which are iPads. This obviously poses a significant challenge for publishers and advertisers who are trying to circumvent Apple by focusing their attention on mobile devices with the Android operating system. These results suggest that to reach the highest percentage of smartphone and large media tablet owners, news organizations must make their content available on Apple iPhones and iPads.”

To view a complete report of the RJI survey visit: https://rjionline.org/news/2012-rji-mobile-media-news-consumption-survey-summary

The Donald W. Reynolds Journalism Institute works with citizens, journalists and researchers to strengthen democracy through better journalism. RJI seeks the most exciting new ideas, tests them with real-world experiments, uses social science research to assess their effectiveness and delivers solutions that citizens and journalists can put to use in their own communities.