Just like electronics, living cells use electrons for energy and information transfer. Despite electrons being a common “language” of the living and electronic worlds, living cells cannot speak to our largely technological realm. Cell membranes are largely to blame for this inability to plug cells into our computers: they form a greasy barrier that tightly controls charge balance in a cell.  Thus, giving a cell the ability to communicate directly with an electrode would lead to enormous opportunities in the development of new energy conversion techniques, fuel production, biological reporters, or new forms of bioelectronic systems.

Previous studies performed by scientists and collaborators at Lawrence Berkeley National Laboratory’s (Berkeley Lab) Molecular Foundry have made enormous headway toward cellular-electrode communication by using E. coli as a testbed for expressing an electron transfer pathway naturally occurring in a bacterial species called Shewanella oneidensis MR-1. The engineered E. coli was able to use the protein complex to reduce nanocrystalline iron oxide (Jensen, et al. (2010) PNAS.). Building off of this research, a group led by Caroline Ajo-Franklin, a staff scientist in the Biological Nanostructures Facility at Berkeley Lab’s Molecular Foundry studying synthetic biology, has now demonstrated that these engineered E. coli strains can generate measurable current at an anode.

In S. oneidensis MR-1, the MtrCAB pathway is a protein complex that transports metabolic electrons across the cell membranes to metal oxides and minerals at the extracellular surface. S. oneidensis uses this electron conduit to essentially breathe solid metals in environmental conditions where oxygen is not available. When the genes encoding these complexes are expressed in E. coli, the cells can use them and reduce external metal sources. While the electron transport pathway was functional in E. coli in the previous study, the engineered strain showed reduced growth and markedly slower electron transfer rates than Shewanella. Closer investigation of the original engineered strain indicated that expressing large quantities of the MtrCAB proteins negatively impacted cell health and morphology. Armed with this data, Ajo-Franklin’s team set out to explore optimization of the system by fine-tuning the synthesis of the proteins and the growth of the cells. 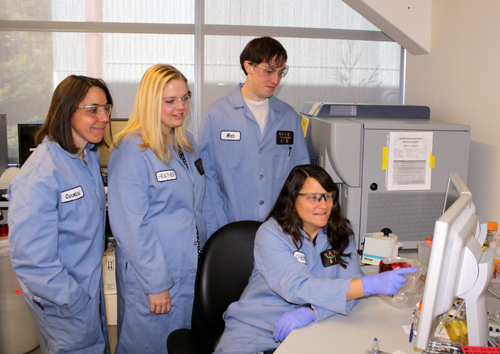 Biological systems are a delicate balance between interconnected regulatory and metabolic pathways, and the activity of protein systems can change dramatically depending on the health of the cellular system as a whole. The team therefore expanded the study to optimize the number of electron conduits synthesized per cell and to measure how this impacted electron transfer to an electrode.

“This synthetic biology approach of swapping in parts [promoters] combined with our high-throughput plate screening of hundreds of cell variants has allowed us to quickly zero in and focus on a few constructs for in-depth evaluation,” said Cheryl Goldbeck, a senior scientific engineering associate at the Molecular Foundry and first author of the publication.

Interestingly, the strain that produced the greatest current at the anode was not the strain designed to maximize the number of electron conduits expressed in the membrane. Instead, the strains with optimized cellular health produced the maximum observed current, despite having only a moderate level of the electron transport proteins.

“When engineering a living system, you cannot simply just improve one aspect and expect better results. This would be like training for a marathon just by lifting weights to strengthen your legs. Instead, you have to look at how all the pieces work together,” said Caroline Ajo-Franklin. “In our case, we found that building more of the protein complexes compromised the cell’s health and caused it not to work well.” 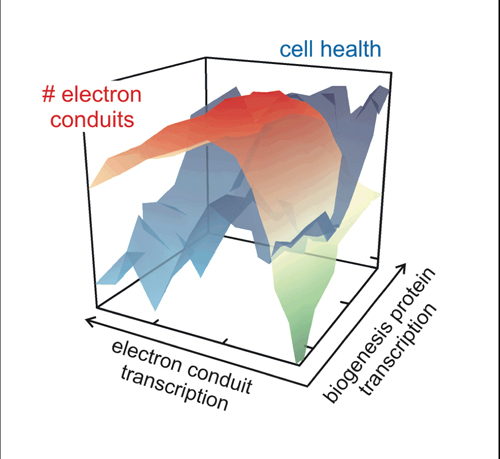 The Foundry team discovered that there is a delicate balance between the number of MtrCAB electron conduits (green-to-red contour) and cell health (blue contour) in their engineered E. coli strains. The right combination allows E. coli to be ‘wired up’ to an electrode. Image credit: Berkeley Lab

The results of this new study, “Tuning promoter strengths for improved synthesis and function of electron conduits in Escherichia coli,” have recently been published in ACS Synthetic Biology, the American Chemical Society’s new flagship journal for synthetic biology.

The researchers found that optimization of electron transfer to an electrode was far more complex than simply increasing the number of electron conduits available in the cell membrane. Instead, maximum current was correlated with the healthiest cultures, which expressed a moderate level of MtrCAB pathway. Utilization of this natural electron transport system creates an electrical interface out of the cell itself rather than requiring the incorporation of external conductor materials. The ability to transform any cell into a biological “wire,” which can then interact directly with electronics, offers enormous potential for the development of groundbreaking cell to electronic communication systems.

“By engineering cells to build electrical contacts with electrodes, we can capture the natural transfer of electrons during cellular metabolism and harness electrical energy,” said Heather Jensen, a Ph.D. candidate in the Department of Chemistry at the University of California, Berkeley. “This approach also takes advantage of the cell’s ability to repair the electron conduits and self-replicate.”

Work performed at the Molecular Foundry was supported by the Oﬃce of Science of the U.S. Department of Energy, and from the National Science Foundation through a career grant.