The National Aeronautics and Space Administration has awarded $4.4 million to a collaboration of scientists at five United States universities and NASA’s Marshall Space Flight Center to help build a telescope for deployment on the International Space Station in 2017.

The U.S. collaboration is part of a 13-nation effort to build the 2.5-meter ultraviolet telescope, called the Extreme Universe Space Observatory. UChicago Prof. Angela Olinto leads the U.S. collaboration. The telescope will search for the mysterious source of the most energetic particles in the universe, called ultra high-energy cosmic rays, from the ISS’s Japanese Experiment Module. The source of these cosmic rays has remained one of the great mysteries of science since physicist John Linsley discovered them more than 50 years ago. These cosmic rays consist of protons and other subatomic scraps of matter that fly through the universe at almost light speed. 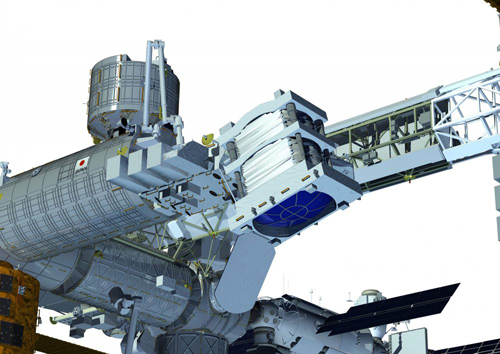 The University of Chicago expands its long history of cosmic ray research with its participation in the Extreme Universe Space Observatory, which is scheduled for deployment aboard the Japanese Experiment Module of the International Space Station in 2017. llustration by JEM-EUSO

A subset of the U.S. institutions will use the NASA grant to build lasers, flashers and monitoring equipment that will be used to calibrate the telescope’s optics from 20 locations around the globe as the ISS passes overhead.

Ultra high-energy cosmic rays may come from supermassive black holes at the centers of nearby galaxies, or perhaps they are decaying particles left over from the big bang. These rays hit the atmosphere with the energy of a tennis ball traveling at 167 miles an hour. This impact produces a giant cascade of many tens of billions of secondary particles that previously have been observed only from Earth-based detectors.

UChicago has a long history of cosmic-ray research, including the Pierre Auger Observatory, the largest cosmic-ray detector ever built. Auger conducted cosmic ray research at UChicago in 1942, launching hot air balloon experiments from the former site of the University’s Stagg Field.

UChicago Nobel laureate James Cronin initiated the Auger project with Alan Watson of the University of Leeds in the early 1990s. They built the observatory in Argentina in collaboration with scientists from 19 countries, who shared construction costs for the $50 million observatory. When Auger’s construction was completed in 2008, the observatory consisted of a grid of electronic instruments that covered 3,000 square kilometers, an area more than half of the size of Delaware.

The Auger Observatory began collecting data in 2004. “We have solved many open questions from last century, but we didn’t find the source of the highest-energy cosmic rays,” Olinto said. The most useful data occur at the very highest energies. Auger detects approximately two of these highest-energy events every month.

But it takes a long time to collect enough of these events to make a map of the sky that indicates more of them are coming from one direction than another. “I wanted to go the next step, which is to make something 10 times bigger than Auger,” Olinto said. 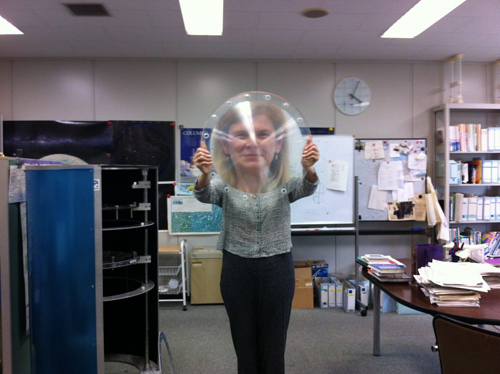 Prof. Angela Olinto, chair of astronomy & astrophysics, leads the U.S. collaboration of an international effort to study ultra high-energy cosmic rays from the International Space Station. Here she peers through a prototype Fresnel lens developed for the Extreme Universe Space Observatory, which will incorporate three such lenses to allow the best efficiency for the widest field of view. Image courtesy of Angela Olinto

Auger combines two techniques for observing cosmic rays. One technique consists mostly of large plastic water tanks, which serve as ground detectors that measure the shape of the shower. Spaced at one-mile intervals, the tanks occasionally intercept a particle from the atmospheric cascade generated by cosmic rays. The particles produce a flash as they cross from air into water. Electronics in the dark tanks detect the light and radios the information to a central station.

The second technique involves four infrared telescopes that detect ultraviolet light emissions generated in the atmosphere by cosmic rays. “You not only see the fluorescence on the ground, but you see the whole shower developing on the atmosphere,” Olinto explained.

The Auger telescopes look straight up to the top of the atmosphere, approximately 40 kilometers (24.8 miles) high. “If you go to the International Space Station with the exact same technique and you look down, you can see a lot more of the atmosphere because now you’re 400 kilometers up,” Olinto said. “With a 60-degree opening angle, which we are designing, you can see instantaneously a hundred times the Auger area.”

Olinto views the Extreme Observatory as the first step toward using the entire Earth atmosphere for studying subatomic particle interactions at energies far exceeding what the most powerful man-made accelerator at the Large Hadron Collider can currently produce. “In my opinion, it’s the way to the future,” she said.