COLUMBUS, Ohio – New research shows that a tiny piece of RNA has an essential role in ensuring that embryonic tissue segments form properly.

The study, conducted in chicken embryos, determined that this piece of RNA regulates cyclical gene activity that defines the timing of the formation of tissue segments that later become muscle and vertebrae.

Genes involved in this activity are turned on and off in an oscillating pattern that matches the formation of each tissue segment. If the timing of these genes’ activity doesn’t remain tightly regulated, the tissue either won’t form at all or will form with defects. 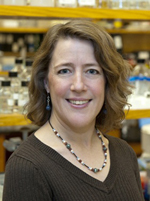 One gene long associated with this segmentation “clock” is called Lfng. Researchers established in this study that a single microRNA – a tiny segment of RNA that has no role in producing any protein – is key to turning off Lfng at precisely the right time as tissues form in this oscillating pattern.

When the microRNA was deleted or manipulated so that it wouldn’t bind when it was supposed to, the oscillatory pattern of the genetic clock was broken and tissue development was abnormal.

“It’s a big deal to find that a single interaction between a microRNA and its target has this very profound effect when you interfere with its function,” said Susan Cole, associate professor of molecular genetics at The Ohio State University and lead author of the study. “There are very few cases where interfering with just one microRNA during development can make this much of a difference. But here, this regulation is so tight that this turns out to be incredibly important.

“We don’t think this is exclusive to chickens because the site where the microRNA binds to the RNA segment produced by Lfng is found in chickens, humans, mice and zebrafish.”

A better understanding of these segmentation clocks could lead to new ways to treat certain human conditions that are traced to embryonic development. Defects in the clock are implicated in vertebral malformations, and the correct patterning of the nervous system and blood vessels depends on proper timing of the earliest stages of development.

The research is published in the journal Developmental Cell.

This work focuses on the formation of somites, which are tissue segments in the mesoderm of embryos that give rise to the ribs, vertebrae and muscle in all vertebrates, including humans.

Within the segmentation clock, genes are turned on and make RNA, and resulting proteins then turn off the genes, and so on, and the pattern repeats until all necessary somites are formed. Experts in tissue segmentation liken the oscillating cycle of gene activation and de-activation that cells go through before they form somites to the wave that fans perform in a stadium.

The downward part of the cycle – when the wave fans are seated – is just as critical as the upward cycle, when fans are standing. This means the RNA that genes make on their way up must be destroyed so the genes can be turned off. Existing mathematical models of the segmentation clock suggest that the half-life of RNA is tightly controlled, but can’t say how.

“We were interested in identifying the mechanisms that made this RNA unstable enough that it would make these perpetual oscillations,” Cole said. A graduate student in her lab pointed the way to microRNAs, which can destabilize their target transcripts – segments of RNA produced early in the gene expression process.

“MicroRNAs can either stop protein from being made or target an RNA to be destroyed. That’s what we think is happening here: It’s targeting RNA to be destroyed,” said Cole, also an investigator in Ohio State’s Comprehensive Cancer Center.

The microRNA identified in the study is known as mir-125a-5p. While microRNAs used to be considered useless parts of the genome, they are now recognized for their power in influencing protein production – even though they don’t actually help with protein production.

The researchers used multiple techniques to block mir-125a-5p in chicken embryos as the segmentation clock was running, either blocking all activity of the microRNA or interfering with its ability to bind with RNA encoded by the Lfng gene.

“When the clock doesn’t oscillate the cells don’t make nice, regular somites, but instead make nothing or partially formed somites,” Cole said. “This has really important applications for the mechanisms that control the clock, and could gives us hints about how the timeframe of this clock varies from species to species.”

Cole also plans to study how this regulation occurs in mammals and whether this microRNA’s interaction with Lfng is involved in disease processes affected by this gene.

This work was supported by the National Science Foundation, the National Institutes of Health and a Pelotonia Predoctoral Fellowship.