Although they live in similarly extreme ecosystems at opposite ends of the world, Antarctic insects appear to employ entirely different methods at the genetic level to cope with extremely dry conditions than their counterparts that live north of the Arctic Circle, according to National Science Foundation- (NSF) funded researchers.

Writing in the Proceedings of the National Academy of Sciences, the researchers concluded, “Polar arthropods have developed distinct… mechanisms to cope with similar desiccating conditions.”

The researchers noted that aside from the significance of the specific discovery about the genetics of how creatures cope in polar environments, the new finding is important because it shows how relatively new and developing scientific techniques, including genomics, are opening new scientific vistas in the Polar Regions, which were once thought to be relatively uniform and, relatively speaking, scientifically sterile environments.

“It’s great to have an Antarctic animal that has entered the genomic era,” said David Denlinger, a distinguished professor of entomology at Ohio State University and a co-author of the paper. “This paper, which analyzed the expression of thousands of genes in response to the desiccating environment of Antarctica, is just one example of the power that the genomic revolution offers for advancing polar science. “ 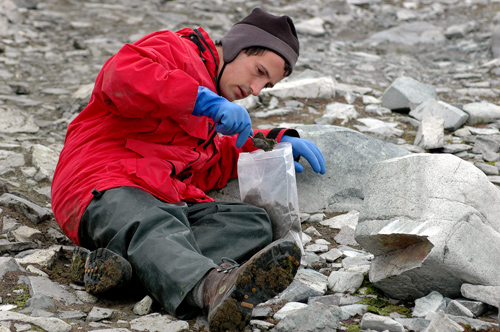 Biologist Nick Teets searches for Belgica antarctica, a flightless midge, on an island near NSF’s Palmer Station on the Antarctic Peninsula, during a 2010 deployment. Image credit: Photograph by Peter Rejcek, NSF

Polar Programs manages the U.S. Antarctic Program, through which it coordinates all U.S. research on the southernmost continent and aboard ships in the Southern Ocean as well as providing the necessary logistical support.

The finding also adds to the developing picture of the Polar Regions as having similarities and yet subtle and perhaps very important differences, previously undetected by science. NSF-funded scientists late last year, for example, published research indicating that differing contributions of freshwater from glaciers and streams to the Arctic and Southern oceans may be responsible for the fact that the majority of microbial communities that thrive near the surface of the Polar oceans share few common members.

Although Antarctica’s surrounding oceans and coastal margins are home to a variety of large creatures such as seals, penguins and whales, insect life is rare, except on the Antarctic Peninsula.

The research team that produced the new findings collected specimens for their research from offshore islands near NSF’s Palmer Station on Anvers Island in the Peninsula region. 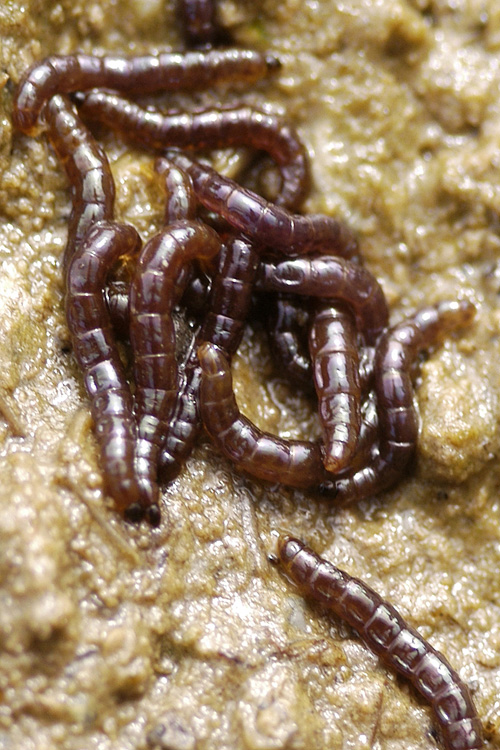 Surrounded by an ocean, the Antarctic continent is a polar desert where creatures have adapted to life with infrequent access to liquid water. The researchers note that Antarctic midge larvae, for example, “are remarkably tolerant of dehydration, surviving losses of up to 70 percent of their body water.”

They also note that, in general, “insects, in particular, are at high risk of dehydration because of their small body size and consequent high surface-area-to-volume ratio.”

Among Antarctic insects, the ability to tolerate dehydration is an important evolutionary development, allowing the creatures to successful survive the cold and dry southern winter.

“The loss of water enhances acute freezing tolerance,” they write. “In addition, overwintering midge larvae are capable of undergoing another distinct form of dehydration, known as cryoprotective dehydration.

Cryoprotective dehydration is a mechanism in which a gradual decrease in temperature in the presence of environmental ice “creates a vapor pressure gradient that draws water out of the body, thereby depressing the body fluid melting point and allowing larvae to remain unfrozen at subzero temperatures.”

The researchers compared the midge’s strategy to those of other terrestrial arthropods that cope with prolonged periods when water is lacking, including the Arctic springtail Megaphorura arctica and Folsomia candida, which are more widely distributed across the globe; both species are members of a group of arthropods, which are closely related to insects, known as Collembola.

The differences, they concluded, lie in the way that various genes express themselves.

After a detailed analysis of gene expression in the various species, the researchers concluded that “although B. antarctica and M. arctica are adapted to similar environments, our analysis indicated very little overlap in expression profiles between these two arthropods.”

They add that “these differences in expression patterns may reflect different strategies for combating dehydration; whereas B. antarctica shuts down metabolic activity and waits for favorable conditions to return, F. candida [instead] relies on active water-vapor absorption to restore water balance during prolonged periods of desiccation.”

They further add that because of the taxonomic difference between the Antarctic midge and the collembolan species with which gene expression was compared, more work is needed “to better understand the evolutionary physiology of dehydration tolerance in this taxonomic family.”