Detecting Cancer with Lasers Has Limited Use, Say Mu Researchers

COLUMBIA, Mo. — One person dies every hour from melanoma skin cancer in the United States, according to the American Cancer Society. A technique known as photoacoustics can find some forms of melanoma even if only a few cancerous cells exist, but a recent study by University of Missouri researchers found that the technique was limited in its ability to identify other types of cancer. Attaching markers, called enhancers, to cancer cells could improve the ability of photoacoustics to find other types of cancer and could save lives thanks to faster diagnoses, but the technique is in its early stages.

“Eventually, a photoacoustic scan could become a routine part of a medical exam,” said Luis Polo-Parada, assistant professor of pharmacology and physiology and resident investigator at the MU Dalton Cardiovascular Research Center. “The technique doesn’t use X-rays like current methods of looking for cancer. It could also allow for much earlier detection of cancer. Now, a cancerous growth is undetectable until it reaches approximately one cubic centimeter in size. Photoacoustics could potentially find cancerous growths of only a few cells. Unfortunately, our research shows that, besides some cases of melanoma, the diagnostic use of photoacoustics still has major limitations. To overcome this problem, the use of photoacoustic enhancers like gold, carbon nanotubes or dyed nanoparticles is needed.”

Photoacoustics uses pulses of laser light to heat cells for a fraction of a second. When the cells become hot they emit a tiny sound. Extremely sensitive microphones can hear those sounds. The strength of the sound depends on how much laser light is absorbed. Since darker objects absorb more light they also emit more sound and can be found using photoacoustics.

“Some melanoma can be found by photoacoustics because the cells contain large quantities of melanin, a dark pigment,” Polo-Parada said. “Other cancers don’t have that much pigmentation; hence, they don’t stand out as much in photoacoustic scans. This is where enhancers may be able to help by labeling cancer cells and making them stand out in a scan.” 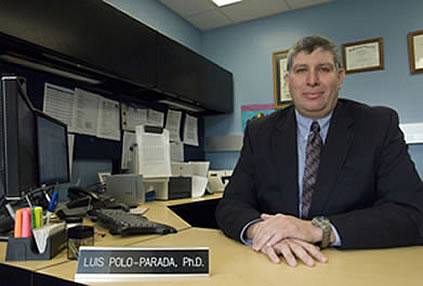 Luis Polo-Parada of MU’s Dalton Cardiovascular Research Center. A recent study by Polo-Parada found that photoacoustics was limited in its ability to identify other types of cancer than melanoma. Image credit: University of Missouri

Polo-Parada in collaboration with Gerardo Gutierrez-Juarez, a researcher from the University of Guanajuato, Mexico, found that out of seven types of cancer cells, only one type of melanoma was dark enough to produce a sound strong enough to be distinguishable from the rest.

The photoacoustic technique holds promise in the fight against cancer, said Polo-Parada, but it is too soon to say exactly when the public will benefit. Eventually, other diseases that cause changes in the coloration of cellular tissue, such as malaria, could be found by photoacoustics.

Luis Polo-Parada is an assistant professor in medical pharmacology and physiology and resident investigator at MU’s Dalton Cardiovascular Research Center. The study, “An experimental and theoretical approach to the study of the photoacoustic signal produced by cancer cells,” was published in the journal AIP Advances.