UCLA life scientists, working with colleagues in China, have discovered a new method to quickly assess plants’ drought tolerance. The method works for many diverse species growing around the world. The research, published in the journal Methods in Ecology and Evolution, may revolutionize the ability to survey plant species for their ability to withstand drought, said senior author Lawren Sack, a UCLA professor of ecology and evolutionary biology.

“This method can be applied rapidly and reliably for diverse species across ecosystems worldwide,” he said of the federally funded research by the National Science Foundation.

Droughts, which are a major threat to plants worldwide, are expected to become both more frequent and more severe with climate change, Sack said. Assessing species’ vulnerabilities to drought is essential to predict their responses to climate change and plan their conservation, he said.

Earlier this year, Sack and his research team resolved a decades-old debate about what leaf traits best predict drought tolerance for diverse plant species worldwide. However, these leaf traits are too difficult and time-consuming to measure, often taking up to two days for one species, Sack said.

The UCLA team worked with collaborators at the Xishuangbanna Tropical Botanical Gardens (XTBG) in Yunnan, China, to develop a method for measuring leaf drought tolerance that is 30 times faster. It is based on an important trait known as “turgor loss point.” During drought, the leaf cells’ water becomes harder to replace. The turgor loss point is reached when leaf cells become so dehydrated their walls become flaccid. This cell-level loss of turgor — or swollenness — causes the leaf to become limp and wilted, and the plant cannot grow, Sack said. 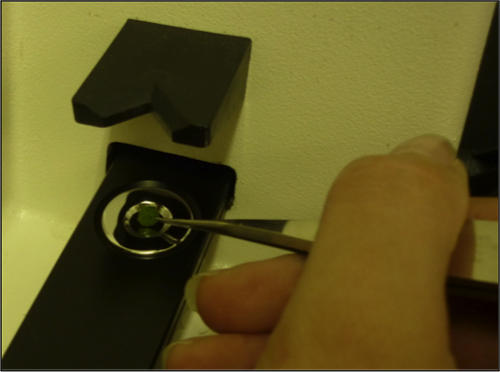 The new method, based on a technique called “osmometry,” requires only about 10 minutes per leaf, sufficient to make a fast estimate for a given species.

Plant growth depends on the ability to withstand enormous losses of water to evaporation when they open their pores, or stomata, to take in carbon dioxide for photosynthesis. The amount of evaporation a plant can tolerate depends on the water pressure inside of its cells, which in turn depends on its turgor potential; the pushing force of water against the inside of the cell walls; and the osmotic potential inside the cell, which is to say, the pulling force of dissolved salt molecules on the water molecules — the same force that makes water with salt added boil at a higher temperature.

Plant cells need to maintain their turgor pressure to hold up their cell walls, but as evaporation dries out the cells, they lose turgor pressure, said co-author Christine Scoffoni, a UCLA graduate student in the Department of Ecology and Evolutionary Biology.

At the turgor loss point, saltier cells have a stronger pulling force holding the water molecules inside the cell. Plants with saltier cells can keep their stomata open in drier conditions, Sack said.

The turgor loss point, which varies widely among species, is a powerful determinant of the plant’s drought tolerance. The UCLA team previously showed that the turgor loss point can predict the dryness of the ecosystem from which a plant species comes.

“Drought-tolerant plants typically have low turgor loss points and saltier sap,” said lead author Megan Bartlett, a UCLA graduate student in the Department of Ecology and Evolutionary Biology. “Some plant species even load more salt into their cells when they experience a drought to lower their turgor loss point and improve their drought tolerance.”

Researchers have been measuring turgor loss point and osmotic potential, or cell saltiness, for decades. Once the UCLA team demonstrated that these are the key traits to predict drought tolerance, they realized that a stumbling block to their use is the difficulty of their measurement. These traits are typically measured by generating a relationship called the pressure-volume (p-v) curve. To produce a p-v curve, a leaf is dried slowly. Leaf water pressure and water mass are repeatedly measured, requiring nearly constant attention from a researcher for up to two days for a single species.

“After we identified these traits for measuring drought tolerance, our next challenge was to make it possible to measure them quickly for many diverse species,” Bartlett said.

To hasten the process, the UCLA team and XTBG froze small discs of leaf tissue in liquid nitrogen to break the cell walls and mix the cell sap. The saltiness of the cell sap could then be measured with an instrument called an osmometer, which is typically used to measure osmotic potential in urine or blood. (Earlier studies compared osmotic potential measured by p-v curves with those from the osmometer, but the method had not been refined enough to produce reliable results for turgor loss point.)

The UCLA-XTBG team refined the method so that it can be applied in 10 minutes. They made measurements for 30 species from very different ecosystems, including tropical forest in China and the California chaparral. From this comparison, they developed the first equations for predicting p-v curve turgor loss point and cell saltiness from osmometer measurements.

“This approach has great potential for determining drought tolerance for thousands of species that are threatened by climate change, and to answer important questions about the relationship between drought tolerance and plant evolution and ecology that were just not feasible before,” Sack said.