EAST LANSING, Mich. — By identifying a key protein that tells certain breast cancer cells when and how to move, researchers at Michigan State University hope to better understand the process by which breast cancer spreads, or metastasizes.

When breast cancer metastasizes, cancer cells break away from a primary tumor and move to other organs in the body, including the lungs, liver and brain. In work published recently in the journal Cancer Research, MSU researchers Kathy Gallo and Jian Chen show a protein called MLK3 (mixed lineage kinase 3) is a critical driver of breast cancer cell migration and invasion.

More importantly, Chen and Gallo showed that in triple-negative breast tumor cells, which are more aggressive and for which targeted therapies are needed, it is possible to thwart that cell migration and invasion.

“While the classical approach to cancer drugs has been to find drugs that kill tumor cells, there recently also is an interest in finding drugs that interrupt metastasis,” said Gallo, a professor in MSU’s Department of Physiology. “The hope is that such drugs in combination with conventional therapies may lead to better outcomes in patients.” 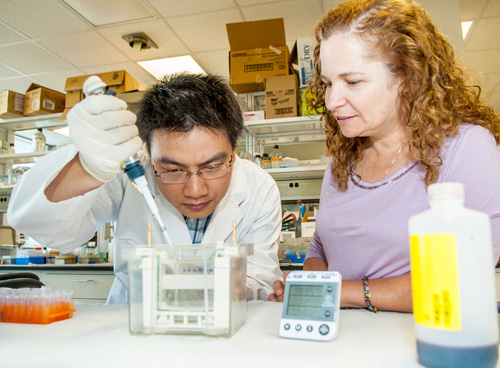 Jian Chen and Kathleen Gallo of MSU’s Department of Physiology, shown in their lab, have identified a key protein that plays a role in how cancer spreads. Photo by Derrick Turner.

As part of their study, Gallo and Chen, a biochemistry graduate student, also found that eliminating MLK3 prevented tumors in animals from metastasizing to the lungs, providing the foundation for future research on targeting MLK3 pathways as an approach to preventing the spread of cancer.

The researchers identified how key cellular proteins were instructed by the MLK3 protein – through the addition of molecular tags called phosphates – to interact with one another, leading cancer cells to move. Specifically, MLK3 promotes the addition of phosphates to another protein called paxillin, which is known to control how cells move.

Gallo and Chen then stopped cell movement in breast cancer models by eliminating MLK3 altogether or using a drug called CEP-1347 to block MLK3’s ability to add phosphates to other proteins. The experimental results indicate that when certain cancer cells lose MLK3, the ability to add phosphates is impaired, eventually crippling the cell migration machinery and diminishing cell movement.

“Our research suggests that the intracellular pathways involving MLK3 that control cell movement could provide new targets for the treatment of patients with metastatic cancer,” Chen said. “Drugs developed for combating the MLK3 activity may be useful in reducing the spread of breast cancer.”

Gallo added that MLK3 is a protein kinase, and these types of proteins have proven to be good drug targets in cancers and other diseases.

“While drugs such as chemotherapy kill all cells, research has shown drugs that inhibit kinases often can be effective with fewer side effects,” she said.

The next step for the researchers is to test whether an MLK3 inhibitor can prevent cancer from metastasizing in animal models.

“Cancer is a very complex collection of diseases, but we believe that certain types of cancers may be sensitive to MLK inhibitors,” Gallo said, “and targeting MLK3 may provide a very useful weapon in the fight against cancer.”

The team’s research was supported by grants from the Department of Defense’s Breast Cancer Research Program and the Elsa U. Pardee Foundation. The MLK inhibitor, CEP-1347, was provided by Cephalon Inc., a wholly owned, indirect subsidiary of Teva Pharmaceuticals Industries Ltd.