ANN ARBOR — Dengue fever and West Nile fever are mosquito-borne diseases that affect hundreds of millions of people worldwide each year, but there is no vaccine against either of the related viruses.

A team of scientists at the University of Michigan and Purdue University has discovered a key aspect both to how the viruses replicate in the cells of their host and how they manipulate the immune system as they spread.

In a study scheduled for online publication Feb. 6 in the journal Science, researchers led by Janet Smith of the U-M Life Sciences Institute describe for the first time the structure of a protein that helps the viruses replicate and spread infection.

“Seeing the design of this key protein provides a target for a potential vaccine or even a therapeutic drug,” Smith said.

The protein, NS1, is produced inside infected cells, where it plays a key role in replication of the virus. NS1 is also released into the bloodstream, where it may help disguise the infection from the patient’s immune system and may play a role in the hemorrhage that is seen in severe dengue virus infection.

Dengue and West Nile viruses are members of the flavivirus family, which includes yellow fever and several encephalitis viruses. Dengue, which emerged as a public health problem in the 1950s, is endemic in the majority of countries along the equatorial belt and has been reported in the southern United States, according to the Centers for Disease Control and Prevention. West Nile virus first appeared in North America in 1999 and rapidly spread to all 48 contiguous states, with nearly 3,000 cases reported in 2013. Dengue fever affects as many as 400 million people worldwide each year. 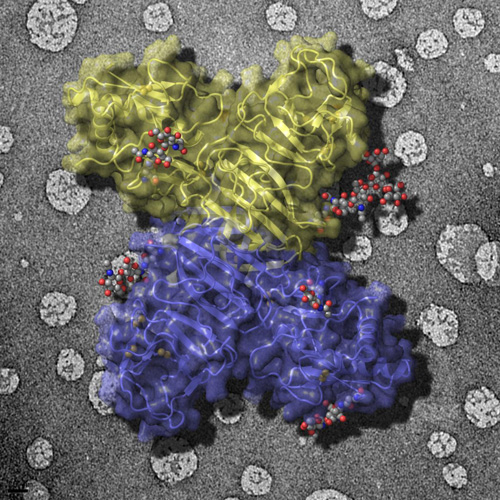 The external face of the flavivirus NS1 protein (sugars in grey balls) is exposed on infected cell surfaces where it can interact with the immune system. This face is also exposed in secreted NS1 particles present in patient sera. The background image shows artificial membranes coated with the NS1 protein. Image credit: David Akey, Somnath Dutta

Smith and her colleagues created images of the protein using X-ray crystallography, a technique that uses X-ray beams to map the positions of atoms in a crystal.

“Isolating the protein in order to study it has been a challenge for researchers,” Smith said. “Once we discovered how to do that, it crystallized beautifully.”

Researchers have pursued this protein for years because both its role in replication and its unique release into the bloodstream mark it as a target for treatment of infection, said Richard Kuhn, professor and department head of biological sciences and the Gerald and Edna Mann Director of the Bindley Bioscience Center at Purdue University.

“Having the structure of NS1 is a huge advance in understanding, and using, the protein to our advantage,” said Kuhn, who led the Purdue team involved in the work. “Understanding how the protein is designed provides an easier pathway to understanding its roles in the virus life cycle. We now know which portions of the protein to target in drug development to shut it down and stop the progression of infection.”

The researchers discovered that NS1 has a 3-D structure with two distinct sides, one facing the replication system of the virus inside cells it infects and the other facing the immune system outside infected cells.

“The two faces of NS1 define the regions responsible for its two major functions,” Smith said. “This understanding will guide future research into dissecting and targeting these regions in disease treatment or prevention.”

Dengue presents specific challenges for researchers working on developing a vaccine. The illness is caused by any one of four related viruses transmitted by mosquitoes. People infected by one type usually develop mild flu-like symptoms, although severe muscle and joint pain is common.

However, if subsequently bitten by a mosquito carrying another of the four types, the second exposure can lead to serious illness and death. This one-two punch greatly complicates development of a vaccine, Smith said.

“We don’t want to prime people for severe dengue disease by delivering their first exposure to the virus in the form of a vaccine,” she said.

Developing a clearer picture of how the NS1 protein interacts with the immune system and influences disease may pave the way for researchers to develop a vaccine that protects people—without inadvertently increasing their risk.

“Now that we understand the structure of the protein, we can manipulate it to probe specific functions,” Kuhn said. “This could lead to a way to prevent any harmful priming of the immune system.”

The research required the different expertise of a range of scientists, Smith said. First, researchers in the Smith lab crystallized the protein at LSI’s Center for Structural Biology. Then they put the crystals in an X-ray beam at the Advanced Photon Source at Argonne National Laboratory in Illinois to create a map of the protein. They used the map to build a 3-D structure in atomic detail.

The lab of Georgios Skiniotis, also at U-M’s LSI, used electron microscopy to show how NS1 associates with membranes of the infected cell, which the researchers suspected would be associated with both virus replication and immune evasion. The Kuhn lab at Purdue showed how that membrane association is critical for replication of the virus inside cells.

“We’re now collaborating with the Purdue virologists to understand exactly how the two faces of NS1 help the virus survive and thrive in patients,” Smith said. “These studies are the next steps toward a vaccine or an antiviral drug.”

Smith is a research professor at the U-M Life Sciences Institute, where her laboratory is located and her research is conducted. She is also the director of the Center for Structural Biology, housed at LSI, and the Margaret J. Hunter Collegiate Professor of Life Sciences, Department of Biological Chemistry, U-M Medical School.