Although cosmic rays were discovered 100 years ago, their origin remains one of the most enduring mysteries in physics. Now, the IceCube Neutrino Observatory, a massive detector in Antarctica, is homing in on how the highest energy cosmic rays are produced.

Cosmic rays are electrically charged particles, such as protons, that strike Earth from all directions, with energies up to 100 million times higher than those created in manmade accelerators.

The intense conditions needed to generate such energetic particles have focused physicists’ interest on two potential sources: the massive black holes at the centers of active galaxies, and the exploding fireballs observed by astronomers as gamma ray bursts (GRBs). 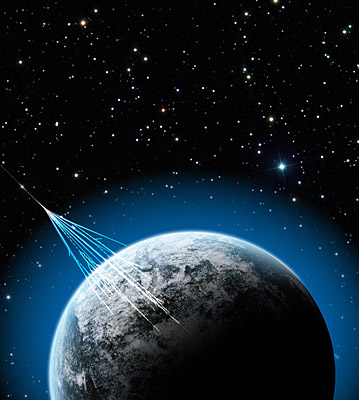 IceCube is using neutrinos, which are believed to accompany cosmic ray production, to explore these theories. In a paper published in the April 19 issue of the journal Nature, the IceCube collaboration describes a search for neutrinos emitted from 300 gamma ray bursts observed, most recently in coincidence with NASA’s SWIFT and Fermi satellites, between May 2008 and April 2010. Surprisingly, they found none — a result that contradicts 15 years of predictions and challenges one of the two leading theories for the origin of the highest energy cosmic rays.

“The result of this neutrino search is significant because for the first time we have an instrument with sufficient sensitivity to open a new window on cosmic ray production and the interior processes of GRBs,” said IceCube spokesperson and University of Maryland physics professor Greg Sullivan. “The unexpected absence of neutrinos from GRBs has forced a re-evaluation of the theory for production of cosmic rays and neutrinos in a GRB fireball and possibly the theory that high-energy cosmic rays are generated in fireballs.”

IceCube is a high-energy neutrino telescope at the geographical South Pole in Antarctica, operated by a collaboration of 250 physicists and engineers from the U.S., Germany, Sweden, Belgium, Switzerland, Japan, Canada, New Zealand, Australia and Barbados. The IceCube Neutrino Observatory was built under a National Science Foundation (NSF) Major Research Equipment and Facilities Construction grant, with assistance from partner funding agencies around the world. The NSF Office of Polar Programs continues to support the project with a Maintenance and Operations grant. Construction was finished in December 2010. 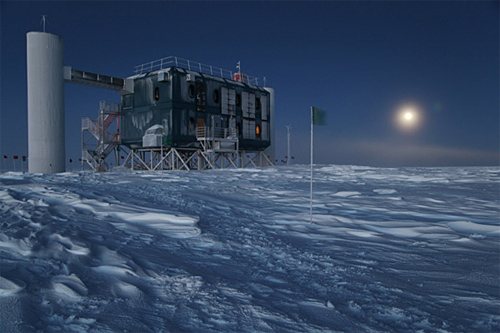 The IceCube Lab in the moonlight at the Amundsen-Scott South Pole Station in Antarctica on April 6, 2012. Data from IceCube is analyzed by the international IceCube Collaboration, over 200 scientists from 11 countries. Photo courtesy National Science Foundation/S. Lidstrom

“High density of radiation is needed for cosmic-ray protons to interact and produce neutrinos,” said Thomas Gaisser, Martin A. Pomerantz Chair of Physics and Astronomy at UD and Delaware institutional lead on the IceCube Project. “Since neutrinos are not being generated at the expected levels inside gamma-ray bursts, it could be that the cosmic-ray acceleration occurs outside the hot fireball where neutrino production is less frequent. It could also be that the acceleration of ultra-high energy cosmic rays takes place elsewhere in the universe, for example at active galaxies powered by accretion onto the massive black holes.”

UD has a long history of involvement in cosmic ray science through the Bartol Research Institute in the Department of Physics and Astronomy. Today, a number of UD research projects focus on cosmic ray detection and analysis. The University produced a special website to share information about IceCube with the public, including blogs by Gaisser and his team as they built the telescope’s “IceTop” surface array of detectors.

IceCube observes neutrinos by detecting the faint blue light produced in neutrino interactions in ice. Neutrinos are of a ghostly nature; they can easily travel through people, walls, or the planet Earth. To compensate for the antisocial nature of neutrinos and detect their rare interactions, IceCube is built on an enormous scale. One cubic kilometer of glacial ice, enough to fit the great pyramid of Giza 400 times, is instrumented with 5,160 optical sensors embedded up to 2.5 kilometers deep in the ice. 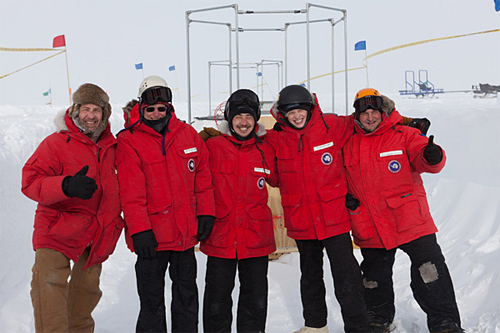 From left, members of the UD team in December 2010 celebrating the completion of the IceCube detector: James Roth, Thomas Gaisser, graduate student Bakhtiyar Ruzybayev, Katie Shirey, a teacher who wrote a blog about the effort and who is now applying to be an astronaut, and Chris Elliott. Image credit: University of Delaware

GRBs, the universe’s most powerful explosions, are usually first observed by satellites using X-rays and/or gamma rays. GRBs are seen about once per day, and are so bright that they can be seen from half way across the visible Universe. The explosions usually last only a few seconds, and during this brief time they can outshine everything else in the universe.

“Although we have not discovered where cosmic rays come from, we have taken a major step towards ruling out one of the leading predictions,” said IceCube principal investigator and University of Wisconsin – Madison physics professor Francis Halzen. 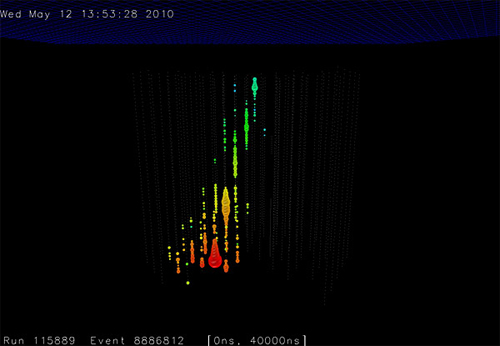 This illustration shows the path of a particle as it travels “up” through the IceCube detector, meaning that the particle traveled all the way through the Earth before it interacted with the ice. Neutrinos, tiny sub-atomic particles with almost no mass and no electrical charge, are the only known particle that can travel through an entire planet. Image credit: University of Delaware