Using molecular simulations that modeled a potassium channel and its immediate cellular environment, atom for atom, UChicago scientists have discovered that just 12 molecules of water cause the long post-activation recovery period required by such ion channels before they can function again. The research has revealed a new mechanism in the function of a nearly universal biological structure that will have broad implications, ranging from fundamental biology to the design of pharmaceuticals.

“Our research clarifies the nature of this previously mysterious inactivation state. This gives us better understanding of fundamental biology and should improve the rational design of drugs, which often target the inactivated state of channels,” said Benoît Roux, professor of biochemistry and molecular biology, whose team’s findings were published online July 28 in Nature.

Potassium channels, present in the cells of virtually all living organisms, are core components in bioelectricity generation and cellular communication. Required for functions such as neural firing and muscle contraction, they serve as common targets in pharmaceutical development.

These proteins act as a gated tunnel through the cell membrane, controlling the flow of small ions into and out of cells. After being activated by an external signal, potassium channels open to allow ions through. Soon after, however, they close, entering an inactive state and are unable to respond to stimuli for 10 to up to 20 seconds.

The cause of this long recovery period, which is enormously slow by molecular standards, has remained a mystery, as structural changes in the protein are known to be almost negligible between the active and inactivated states—differing by a distance equivalent to the diameter of a single carbon atom. 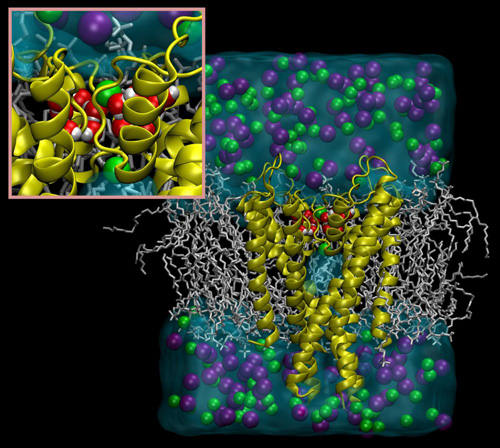 This illustration depicts a simulated potassium channel and its surrounding environment. Potassium ions (green) are unable to pass through because water molecules (red and white) are present inside the protein, locking the channel into an inactivated state. Illustration by Benoit Roux/University of Chicago

To shed light on this phenomenon, Roux and his team used supercomputers to simulate the movement and behavior of every individual atom in the potassium channel and its immediate environment. After computations corresponding to millions of core-hours, the team discovered that just 12 water molecules were responsible for the slow recovery of these channels.

They found that when the potassium channel is open, water molecules quickly bind to tiny cavities within the protein structure, where they block the channel in a state that prevents the passage of ions. The water molecules are released slowly only after the external stimulus has been removed, allowing the channel to be ready for activation again. This computer simulation-based finding was then confirmed through osmolarity experiments in the laboratory.

“Observing this was a complete surprise, but it made a lot of sense in retrospect,” Roux said. “Better understanding of this ubiquitous biological system will change how people think about inactivation and recovery of these channels, and has the potential to someday impact human health.”