Heroin, Cocaine, Marijuana. You know them all. They are just brothers and sisters, and belong to one big and powerful family (commonly known as drugs, or druggs etc.).

May be you would like to ask, “OK, it’s a family, then who is the father”.

Well, their father is a very well-known, highly revered, and deeply feared personality in time and space. He is widely known as the “Godfather”. 🙂

However, as opium appeared in the row, kindly remember the ‘Opium war’. It was between China and Britain. China fought against the then British Empire of Queen Victoria, whose merchants were supplying opium in China to ‘opiumize’ the Chinese. Note that, at those days Opium was not a forbidden item in Great Britain, but in China it was prohibited (that’s great).

So China fought the two wars – first opium war from 1839 to 1842, and the second opium war from 1856 to 1860. Although China lost the wars but it proved the high morality the Chinese Rulers were practicing over their British counterparts.

Now time has changed, we entered into 21st Century. Drugs still remain as powerful addictive means, at the same time new and innovative items only lengthen the list of addictive materials. One such new drug is the internet, and one of its powerful ingredients is ‘Google’ followed by Facebook, YouTube, PornTube etc. etc..

Google has just hypnotized the net with its powerful addictive arms and legs. Consequently, China is now fighting the ‘Third Opium War’. 🙂

But this time, most probably China is going to win the war. China has Baidu – the popular Chinese search machine, and other tech giants like Microsoft and HP are not interested about Google’s business there. So China has strong ground, and battlefield to fight Google and emerge as the ‘Winner’. Thereafter China can be happy. The third war is conquered.

Now let’s leave the battlefield and start dealing with the drugs. From Earth to Heaven they continued to dominate every space where humans marked their footsteps. Now that NASA finds cocaine in the shuttle Discovery’s hanger is no surprise.

We often see the news of Astronauts/Cosmonauts walking in the Space. Well the ‘Space’ is very high, and (may be) you need to be in a ‘high’ while walking in the infinite zone. And only offspring of ‘Godfather’ can offer extra courage needed to make such extra-vehicular activities. So comes the solution – cocaine inside NASA.

In addition – those aliens with whom NASA’s dealing secretly. All these extra-terrestrial activities need some extra power. And if you are cocainized, it’s of course very easy to talk with the aliens, or walk in the ‘Stephen Hawking’ zone. 🙂

By the way, it’s just a joke. Don’t take it seriously. Astronauts or Cosmonauts are highly qualified, intelligent, and courageous Men and Women. They don’t need cocaine or marijuana to walk in the Space rather ‘Brain’. That they have ‘very good’.

Wishing our heroes more exciting success in the coming days, we conclude the story today.

Just for info: the latest space walk was conducted by two Russian Cosmonauts Maxim Suraev and Oleg Kotov on January 14 this year. 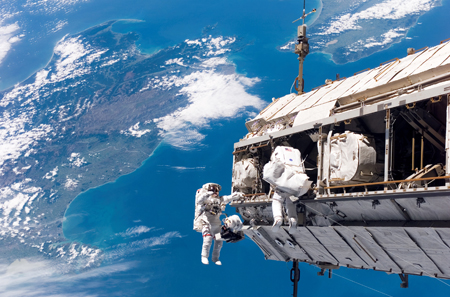 5 comments on “‘Cocainizing the Astronauts’”