Carbon dioxide pumped into the air since the Industrial Revolution appears to have changed the way the coastal ocean functions, according to a new analysis published this week in Nature.

A comprehensive review of research on carbon cycling in rivers, estuaries and continental shelves suggests that collectively this coastal zone now takes in more carbon dioxide than it releases. The shift could impact global models of carbon’s flow through the environment and future predictions related to climate change.

“We need to better understand the role of the coastal ocean in carbon dioxide exchange between the atmosphere and the ocean,” said study co-author Wei-Jun Cai, professor of oceanography in the University of Delaware’s School of Marine Science and Policy within the College of Earth, Ocean, and Environment. “That will give us a much better capacity to predict future global carbon budgets and fluxes due to climate change and other anthropogenic factors.” 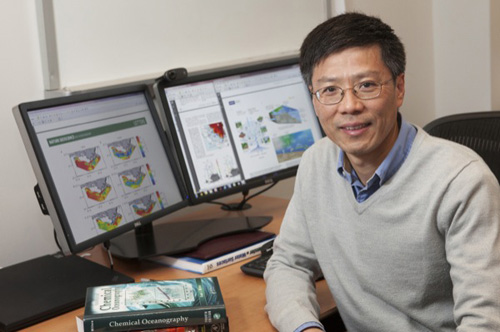 University of Delaware oceanographer Wei-Jun Cai is co-author of an article in Nature on major changes to carbon cycling in the coastal ocean. Photo by Ambre Alexander

Cai and other environmental scientists have been examining the complex dynamics that move different forms of carbon through coastal waters. Numerous variables, from rainfall to temperature to plant photosynthesis, can influence how much carbon is present in water at any given time.

“Carbon is not stationary,” Cai said. “It flows and changes among its different forms.”

The multiple sources and processes at play make coastal carbon challenging to study, however, and Cai said it has traditionally been overlooked in global carbon budget calculations. The annual estimate of how much anthropogenically-released carbon dioxide is trapped by land, for example, has been determined by subtracting the amount taken up by the ocean from the amount put into the air.

“If there is another reservoir — the coastal ocean — that also takes up carbon dioxide, then that changes the balance,” Cai said.

The coastal zone may be relatively small compared to the open ocean, but the researchers point out that it represents a disproportionately large amount of the carbon dioxide exchanged between air and water.

That suggests that the coastal ocean may have its own mechanism for holding carbon dioxide — something Cai first suspected in 2005 on a cruise off the coast of Georgia. There he was surprised to see that sea surface carbon dioxide levels were about the same as 10 years prior, even though there were significantly greater amounts of the greenhouse gas in the atmosphere.

Conventional wisdom would hold that sea surface carbon dioxide should rise in tandem with levels in the atmosphere, as is the case in most of the ocean basin.

In the Nature paper, Cai and his co-authors posit that an increased physical uptake of atmospheric carbon dioxide explains the continental shelf switching from a carbon dioxide source to a sink — or repository — over the industrial age. They also provided a mechanism to explain the slower carbon dioxide increase in the coastal ocean. Others have suggested that agricultural fertilizers feeding extra nutrients into water caused the shift.

The researchers call for ongoing observations and field studies to better understand the complicated dynamics in coastal systems, including additional human-caused changes such as land-use modification, waterway construction and wetland degradation. The work has implications for predictions on ocean acidification, global warming and climate change.

“Compared to the open ocean, we know less about the coastal ocean’s carbon cycle even though it’s right in front of us,” said James Bauer, professor of evolution, ecology and organismal biology in Ohio State University’s College of Arts and Sciences and lead author of the paper. “We just have to commit to increasing the number and types of coastal regions being studied.”

The article, titled “The Changing Carbon Cycle of the Coastal Ocean,” appears in the Dec. 5 issue of Nature. Cai and Bauer’s co-authors are Peter A. Raymond of Yale University, Thomas S. Bianchi of the University of Florida, Charles S. Hopkinson of the University of Georgia and Pierre A.G. Regnier of Université Libre de Bruxelles.

The college brings the latest advances in technology to bear on both teaching and conducting ocean, earth and atmospheric research. Current focus areas are ecosystem health and society, environmental observing and forecasting, and marine renewable energy and sustainability.

CEOE is the administrative base of the Delaware Geological Survey, the Delaware Geographic Alliance and the Delaware Sea Grant College Program and is home to the secretariat of the Scientific Committee on Oceanic Research.