CNN’s Zakaria explores the future of the American Dream

“A mood of anxiety seems to pervade American society today,” according to award-winning author and journalist Fareed Zakaria ’86.

Zakaria, host of CNN’s international affairs program “Fareed Zakaria GPS” and editor-at-large of Time, spoke before an audience of over 350 people on Feb. 26 in the Levinson Auditorium of Yale Law School. The event was sponsored by the Center for the Study of American Politics, a research program within the Institution for Social and Policy Studies (ISPS) at Yale.

Zakaria recounted how as a child growing up in India during the 1970s, he envisioned America as a place of dazzling opulence, based on watching “Dallas,” the popular soap opera featuring a wealthy, powerful Texan family. In contrast, when he arrived in the United States in the 1980s to attend Yale, the country was experiencing the worst recession since the Great Depression. Within a year, when the economy recovered and employment increased, the capitalist spirit returned, he said. Nevertheless, he added, economic anxiety persisted and continues to exist today. 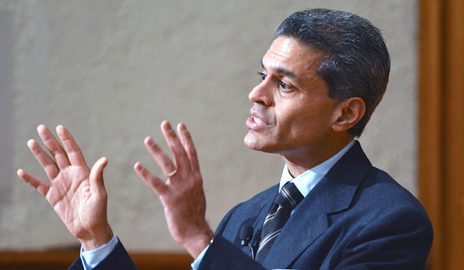 He attributed the current mood of trepidation in the United States to the transformation of the global system. Political stability, technological connectivity, and economic convergence have profoundly altered the global landscape, said Zakaria, enabling more countries such as India and parts of Latin America to raise their standard of global trade and participate in the international economy. This growth of globalization and technology has increased competition for jobs and made manufacturing faster and less expensive, he said.

Discussing the history of recessions, Zakaria noted that there have been increasingly long periods before employment levels return after a recession. From the 1940s to the 1990s, once the economy recovered, employment returned to pre-recession rates within approximately six months, he said; however, following the recession of the early 1990s, jobs did not return until 15 months after the economy recovered. When the tech bubble burst in 2000, job recovery did not occur until 39 months after the recession ended, he said; and the economy recovered from the most recent recession in 2010, yet economists estimate that it will take five years for jobs to return. He considers this troubling trend the “greatest challenge of the American economy going forward.”

“It has been verboten in the United States to even suggest that it is possible that there could be some things wrong with the constitutional model we have in place in terms of effectiveness for the 21st century,” said Zakaria. He proposes that instead of remaining tethered by a constitution created by the nation’s forefathers hundreds of years ago, America develop new economic and political models to meet the challenges of the 21st century.

When asked whether he still believes in American dream, Zakaria responded, “It may be because in some ways I still feel like an immigrant in this country, and perhaps it is a little corny, but yes, I do still believe in the American dream.”

As a Yale college student, Zakaria served as president of the Yale Political Union (YPU) and editor-in-chief of the Yale Political Monthly. During his visit to campus, he met with ISPS faculty and students, the editorial staff of The Politic, and members of YPU, the Yale International Students Organization, and the Yale International Relations Association, which presented him with an honorary membership to the organization.