The recent discovery that bisabolane, a member of the terpene class of chemical compounds used in fragrances and flavorings, holds high promise as a biosynthetic alternative to D2 diesel fuel has generated keen interest in the green energy community and the trucking industry. Now a second team of researchers with the U.S Department of Energy (DOE)’s Joint BioEnergy Institute (JBEI) has determined the three-dimensional crystal structure of a protein that is key to boosting the microbial-based production of bisabolane as an advanced biofuel.

The JBEI research team, led by bioengineers Paul Adams and Jay Keasling, solved the protein crystal structure of an enzyme in the Grand fir (Abies grandis) that synthesizes bisabolene, the immediate terpene precursor to bisabolane. The performance of this enzyme – the Abies grandis α-bisabolene synthase (AgBIS) – when engineered into microbes, has resulted in a bottleneck that hampers the conversion by the microbes of simple sugars into bisabolene.

“Our high resolution structure of AgBIS should make it possible to design changes in the enzyme that will enable microbes to make bisabolene faster,” says Adams, a leading authority on x-ray crystallography. “It should also enable us to engineer out inhibition effects that slow throughput, and perhaps also engineer the enzyme to produce other kinds of fuels similar to bisabolane.” 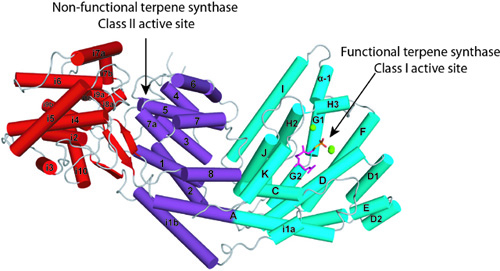 JBEI researchers determined the structure of the AgBIS enzyme and found it to consist of three helical domains, the first three-domain structure ever found in a synthase of sesquiterpenes. This discovery holds importance for advanced biofuels and other applications. Image credit: Berkeley Lab

Adams, who heads JBEI’s Technologies Division, is the corresponding author of a paper describing this work in the Cell Press journal Structure. The paper is titled “Structure of a Three-Domain Sesquiterpene Synthase: A Prospective Target for Advanced Biofuels Production.” Co-authoring it with Adams and Keasling were Ryan McAndrew, Pamela Peralta-Yahya, Andy DeGiovanni, Jose Pereira and Masood Hadi.

JBEI is one of three DOE Bioenergy Research Centers established by DOE’s Office of Science to advance the technology for the commercial production of advanced biofuels. It is a multi-institutional partnership led by the Lawrence Berkeley National Laboratory (Berkeley Lab) and headquartered in Emeryville, CA. 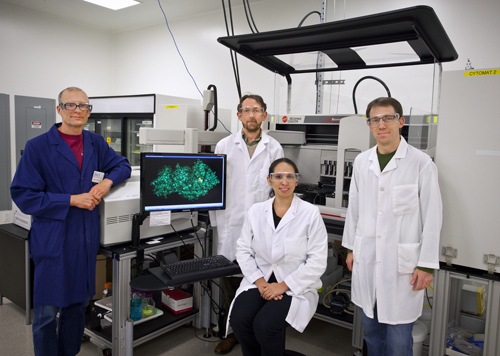 From left, Andy DeGiovanni, Paul Adams, Pamela Peralta-Yahya and Ryan McAndrew were members of the JBEI team that determined the 3D structure of a protein that is critical to the microbial-based production of bisabolane biofuel. (Photo by Roy Kaltschmidt, Berkeley Lab)

This past fall, JBEI researchers identified bisabolane as a potential new advanced biofuel that could replace D2 diesel, today’s standard fuel for diesel engines, with a clean, green, renewable alternative that’s produced in the United States. Using the tools of synthetic biology, the researchers engineered strains of bacteria and yeast to produce bisabolene from simple sugars, which was then hydrogenated into bisabolane. While showing much promise, the yields of bisabolene have to be improved for microbial-based production of bisabolane fuel to be commercially viable.

“The inefficient terpene synthase enzyme is one of the bottlenecks in the metabolic pathway used by the engineered microbes,” says Peralta-Yahya, a lead member of the earlier JBEI team as well as the current team. “Knowing the AgBIS crystal structure will guide us in engineering it for improved catalytic efficiency and stability, which should bring our bisabolene yields closer to economic competitiveness.”

Peralta-Yahya and her colleagues determined that the AgBIS enzyme consists of three helical domains, the first three-domain structure ever found in a synthase of sesquiterpenes – terpene compounds that contain 15 carbon atoms. The discovery of this unique structure holds importance on several fronts, as co-lead author of the Structure paper McAndrew explains.

“That we found the structure of AgBIS to be more similar to diterpene (20 carbon terpene compounds) synthases not only provides us with insight into the function of these less well characterized enzymes, it also provides us with clues to the evolutionary heritage as the archetypal three-domain terpenoid synthases became two-domain sesquiterpene synthases in plants. Furthering our knowledge of the structures and functions of terpenoid synthases may prove to have abundant practical applications aside from advanced biofuels because these enzymes produce a wide variety of specialized chemicals.”

Solving the three-dimensional crystal structure of AgBIS was made possible by the protein crystallography capabilities of Berkeley Lab’s Advanced Light Source (ALS), a DOE Office of Science national user facility for synchrotron radiation, and the first of the world’s third generation light sources. For this work, the JBEI team used three of the five protein crystallography beamlines operated by the Berkeley Center for Structural Biology (BCSB) – beamlines 8.2.1, 8.2.2, and 5.0.3.

“We needed to use multiple beamlines because we collected data on several crystals – the protein by itself, and the protein with different inhibitors/cofactors,” says Adams, who headed the BCSB from 2004 to 2011. “Also, the approach we used to solve the AgBIS structure required high flux tunable x-rays such as those provided at 8.2.1 and 8.2.2, which are superbend beamlines.”