For a short time in grade school, Kevin Boyce lived within two blocks of the La Brea tar pits in Los Angeles, a place where ice age mammal fossils had been discovered. Above his bed hung a poster of the Yale Peabody Museum’s famous Age of Reptiles mural. But it wasn’t a boyhood fascination with prehistoric life that influenced his interest in paleontology, but rather the medieval literary world of Chaucer that Boyce discovered in college.

“I didn’t think twice about fossils between the ages of 7 and 20,” said Boyce, associate professor in geophysical sciences. Even during his undergraduate studies in literature and biology at the California Institute of Technology in the early 1990s, the deep history of life on Earth was far from his mind.

Boyce thinks a lot about fossils now, and his paleontological research has become highly respected by his peers. The Paleontological Society has honored Boyce with the 2011 Charles Schuchert Award, presented annually to an outstanding young paleontologist under the age of 40. 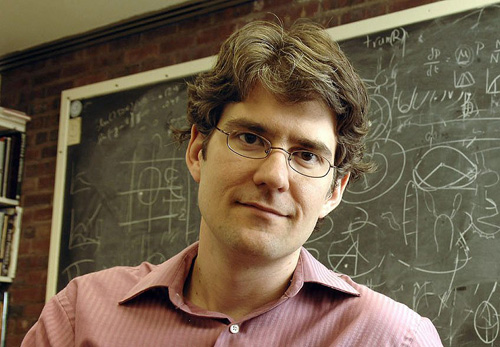 Kevin Boyce, associate professor in geophysical sciences, is the 2011 Charles Schuchert Award recipient. The award is presented annually by the Paleontological Society to an outstanding young paleontologist under the age of 40. Photo by Lloyd DeGrane

Boyce joins a list of 11 other current or former faculty members and alumni who have received the honor since it was established in 1973. The list includes Michael Foote, professor and chairman of the Geophysical Sciences Department, who nominated him for the award.

“Kevin is widely recognized as an international leader in the interpretation of ancient plant structure, ecology and macroevolution,” said Foote, who received the 2000 Schuchert Award.

Boyce specializes in the study of leaves and fossil geochemistry. His trademark is exploiting the chemistry and biology of living plants to make sense of their ancient predecessors in novel, imaginative and rigorous ways. “He applies this new knowledge to improve our understanding of ancient landscapes and the evolution of terrestrial ecosystems,” Foote said.

One of Boyce’s important studies involved some of the smallest early plant fossils.  He found that the physiological limitations of size probably meant they were too small to house any significant quantity of photosynthetic tissue. This meant that although they’re related to modern vascular plants, including ferns, trees and flowers, they would have functioned more like mosses—drying down between wet periods rather than drawing up soil moisture like vascular plants, and having much more subtle impacts upon the land surface and the carbon cycle.

In another important study, Boyce presented chemical evidence that a controversial prehistoric, 20-foot-tall organism actually was a giant fungus rather than any of the other alternatives that have been proposed, including conifer, lichen, or alga. This indicated an ecosystem more microbially based than would be expected from the abundance of vascular plant fossils from this time.

At Caltech, Boyce developed a special fondness for Chaucer and other medieval literary works.

“What I liked about it is that you could very easily envision yourself in that world in the same way you can watch some cheesy modern Excalibur movie where it very much comes from a 21st-century mindset,” Boyce said. But eventually he would come across a development in a story that left him wondering what just happened; why did the author include it and what does it mean?

It made him realize how difficult it is to understand events that happened 600 or 1,000 years ago, let alone the hundreds of millions that often concern paleontologists. When Boyce entered graduate school at Harvard University, he knew nothing about paleontology. But he managed to combine his interest in biology with his literary aesthetic for wanting to understand the intricacies of far-removed times and places.

As a paleontologist, Boyce now tries to visualize long-gone Earth landscapes that would seem alien by comparison with modern times. It might be easy enough to imagine the funny-looking trees that populated a forest in the Carboniferous Period 300 million years ago, but how did it operate ecologically, before the arrival of the now-common plant-eating animals?

And how did plant ecology change with the advent of the first flowering plants approximately 120 million years ago, when dinosaurs still dominated the landscape? “Plant ecology is all based upon the modern world, which is completely a flowering-plant world. If you try to think about ecology before flowering plants, it would have been different,” Boyce said.

A recent climate-simulation study that Boyce conducted with former postdoctoral scholar Jung-Eun Lee showed how the physiology of flowering plants make the modern tropics a cooler, wetter place than if only non-flowering varieties existed.

“Flowering plants are weird, and the modern world is so far removed from what the world would’ve been like before that. I’m just now trying to think about what that would actually mean for how these ecosystems functioned.”

That means teasing the details of a living plant from an inanimate rock. “You can’t see it or touch it and you have to figure out a way to get it out. That’s always been the fun part for me,” Boyce said.

Boyce has found that plants are ideal for studying development and physiology in the fossil record because plant cell walls preserve the cellular anatomy and even the original organic wall material.  X-ray microscopy facilities at Argonne and Brookhaven national laboratories and at the University of Wisconsin’s Synchrotron Radiation Center help him study both modern plant specimens and the geochemical remnants of this biochemistry preserved in fossils.

He also conducts “fieldwork” in the John Crerar Library, measuring images of plant fossils from a scanning electron microscope with a pair of calipers.It makes for some interesting cocktail-party conversations.

“People go, ‘Oh, wow, you’re a paleontologist. What are the exotic places you’ve been to?’ “Well, I go to Crerar with a pair of calipers.”