Chernobyl Effects Could Last for Centuries

Nearly 25 years after the worst nuclear accident in history, new scientific findings suggest that the effects of the explosion at Chernobyl have been underestimated. Experts last month published a series of studies indicating that, contrary to previous findings, populations of animals decreased in the exclusion zone surrounding the site of the former nuclear power plant, and that the effects of radioactive contamination after the outbreak had been “overwhelming.”

More and more pigs with high levels of cesium are found at the scene. This information was disclosed months after doctors detected increased rates of cancer in Ukraine and Belarus, mutations and diseases of the blood, which they believe are related to Chernobyl.

Meanwhile, an American investigation published in April found an increase in birth defects, apparently due to sustained exposure to low level doses of radiation.

For activists against nuclear power, these studies demonstrate that the inhabitants of the affected area will suffer devastating consequences for decades, perhaps centuries.

“This is a problem that will not go away in few years. It will be there for centuries,” said Rianne TeuleI, from the environmental organization, Greenpeace.

“The new research confirms that the problems are larger than what the World Health Organization (WHO) said in 2006 and the International Atomic Energy Agency (IAEA), and will remain, and they will keep on existing and appearing in other studies. It is not anything that is going to go away soon,” he added. 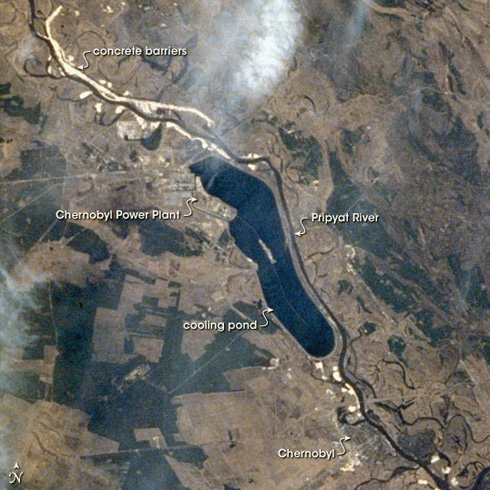 About the image: The region around the Chernobyl nuclear power plant, as seen from the Russian space station Mir (1997).  Image credit: NASA

The disaster occurred in April 1986 after one of the blocks of the nuclear power plant exploded in what is now Ukraine.

It is estimated that the total radioactivity from Chernobyl was 200 times greater than the combined releases of nuclear bombs dropped by the United States in 1945 against the Japanese cities of Hiroshima and Nagasaki.

The explosion and fire generated a huge radioactive cloud that spread across Europe, forcing the evacuation of 350,000 people in areas near the plant.

Years later, the United Nations Organization (UNO), WHO, the IAEA and other agencies joined the governments of Russia, Belarus and Ukraine to create the so-called Chernobyl Forum, to conduct a major study on the effects the disaster and publish its findings in 2006.

The investigation concluded that there were only 56 direct deaths (47 responders and nine children with thyroid cancer), and about 4,000 estimated indirect deaths.

However, the report was criticized by other groups, who claim it vastly underestimated the number of deaths and potential deaths due to the accident.

Some questioned the position of the IAEA, which for decades has supported the use of nuclear energy for civilian purposes. Alternative studies contradict some of the Chernobyl Forum findings and warned that the health effects would be far more devastating.

The TORCH report, published in 2006 by British scientists Ian Fairlie and David Sumner, mentioned the uncertainty that exists about the health effects of exposure to low doses of radiation or to internal radiation entering the body by ingestion of contaminated food.

They also pointed to an underestimation by at least 30 percent of the amount of radioactive particles that the explosion released into the environment. Official figures from the countries concerned also contradict the findings of the Chernobyl Forum.

The International Agency for Research on Cancer, affiliated with the UN, concluded that the most likely number of disaster-related deaths was 16,000, while the Russian Academy of Sciences estimated that, to date, there have been 140,000 deaths in Ukraine and Belarus, and 60,000 in Russia. The Ukrainian National Radiation Commission puts the figure at 500,000.

Doctors informed Ukrainian and Belarusian media in Ukraine earlier this year that there was an increase in cases of cancer, infant mortality and other health problems, and are convinced that they are most certainly the effects of the disaster.

“The figures from the UN and the IAEA do not match with the other agencies of the world body forecast in terms of cancer deaths,” said Oksana Kostikov, the Children’s Cancer Hospital in Minsk. In contrast, the 16,000 deaths predicted by the International Agency for Research on Cancer is a “more accurate assessment of what we see every day,” she added.

In April, American doctor Wladimir Wertelecki published the results of an extensive research on birth defects in children of Ukraine, which revealed higher levels of abnormalities in certain areas of the country. According to the expert, this phenomenon might be related to sustained exposure to low doses of radiation. Wertelecki argued that the Chernobyl Forum findings should be reviewed to know the real effects of this atomic accident.

“The official position is that Chernobyl and birth defects are not related. That position should seriously be reviewed,” he said.