Observations made with NASA’s newly refurbished Hubble Space Telescope of a nearby supernova are allowing astronomers to measure the velocity and composition of “star guts” being ejected into space following the explosion, according to a new study led by the University of Colorado at Boulder.

The team detected significant brightening of the emissions from Supernova 1987A, which were consistent with some theoretical predictions about how supernovae interact with their immediate galactic environment. Discovered in 1987, Supernova 1987A is the closest exploding star to Earth to be detected since 1604 and resides in the nearby Large Magellanic Cloud, a dwarf galaxy adjacent to our own Milky Way Galaxy.

The team observed the supernova in optical, ultraviolet and near-infrared light, charting the interplay between the stellar explosion and the famous “String of Pearls,” a glowing ring 6 trillion miles in diameter encircling the supernova remnant that has been energized by X-rays. The gas ring likely was shed some 20,000 years before the supernova exploded, and shock waves rushing out from the remnant have been brightening some 30 to 40 pearl-like “hot spots” in the ring — objects that likely will grow and merge together in the coming years to form a continuous, glowing circle.

“The new observations allow us to accurately measure the velocity and composition of the ejected ‘star guts,’ which tell us about the deposition of energy and heavy elements into the host galaxy,” said CU-Boulder Research Associate Kevin France of the Center for Astrophysics and Space Astronomy, lead study author. “The new observations not only tell us what elements are being recycled into the Large Magellanic Cloud, but how it changes its environment on human time scales.” 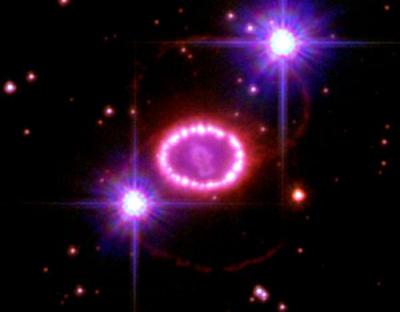 About the image: A team of astronomers led by the University of Colorado at Boulder is charting the interactions between Supernova 1987A and a glowing gas ring encircling the supernova remnant known as the “String of Pearls.” Image credit: NASA

A paper on the subject was published in the Sept. 2 issue of Science. The international study involved study co-authors from 15 other universities and institutes and included CU-Boulder astrophysicist Richard McCray, the Science paper’s second author.

In addition to ejecting massive amounts of hydrogen, 1987A has spewed helium, oxygen, nitrogen and rarer heavy elements like sulfur, silicon and iron. Supernovae are responsible for a large fraction of biologically important elements, including oxygen, carbon and iron found in plants and animals on Earth today, he said. The iron in a person’s blood, for example, is believed to have been made by supernovae explosions.

Hubble is the only observatory in the world that can observe the brightening of the String of Pearls in ultraviolet light, said France. Most of the data for the study was gathered by the Space Telescope Imaging Spectrograph, or STIS, which was installed on Hubble in 1997 and was one of the workhorse instruments before its power supply failed in 2004. A faulty circuit board on STIS was replaced by astronauts on the final Hubble repair mission in May 2009.

The team compared STIS observations in January 2010 with Hubble observations made over the past 15 years on 1987A’s evolution. STIS has provided the team with detailed images of the exploding star, as well as spectrographic data — essentially wavelengths of light broken down into colors like a prism that produce unique fingerprints of gaseous matter. The results revealed temperatures, chemical composition, density and motion of 1987A and its surrounding environment, said France.

Since the supernova is roughly 163,000 light-years away, the explosion occurred in roughly 161,000 B.C., said France. One light year is about 6 trillion miles.

“To see a supernova go off in our backyard and to watch its evolution and interactions with the environment in human time scales is unprecedented,” he said. “The massive stars that produce explosions like Supernova 1987A are like rock stars — they live fast, flashy lives and die young.”

France said the energy input from supernovae regulates the physical state and the long-term evolution of galaxies like the Milky Way. Many astronomers believe a supernova explosion near our forming sun some 4 to 5 billion years ago is responsible for a significant fraction of radioactive elements in our solar system today, he said.

“In the big picture, we are seeing the effect a supernova can have in the surrounding galaxy, including how the energy deposited by these stellar explosions changes the dynamics and chemistry of the environment,” said France. “We can use this new data to understand how supernova processes regulate the evolution of galaxies.”

Some of the upcoming Hubble observations of Supernova 1987A will be made with the Cosmic Origins Spectrograph, a $70 million instrument designed by a team at CU-Boulder’s Center for Astrophysics and Space Astronomy that was installed on Hubble during the 2009 servicing mission. The instrument is designed to help scientists better understand the “cosmic web” of material permeating the cosmos by gathering information from UV light from distant objects, allowing scientists to look back in time and space and reconstruct the condition and evolution of the early universe.

France became a member of the Cosmic Origins Spectrograph science team in 2007 and has been using data gathered by instrument to study topics ranging from the chemistry of the early universe about 2.5 billion years after the Big Bang occurred roughly 13.7 billion years ago, to the evaporation of the atmosphere around a planet that is orbiting another star. “COS has been extremely productive in the early phases of its mission and has great scientific breadth,” said France.