EAST LANSING, Mich. — What motivates people to work harder: The promise of reward or the threat of penalty?

A new study co-authored by a Michigan State University business scholar says it’s the carrot – and not the stick – that drives productivity.

The study, which appears in The Accounting Review, challenges previous research that says the threat of penalty is more effective for getting increased effort, said Karen Sedatole, associate professor of accounting in MSU’s Broad College of Business.

“Our findings show what carrots work better than sticks – in other words, workers respond better to bonuses than penalties,” Sedatole said.

Sedatole authored the study – titled “Sticks and Carrots: The Effect of Contract Frame on Effort in Incomplete Contracts” – with Margaret Christ of the University of Georgia and Kristy Towry of Emory University. 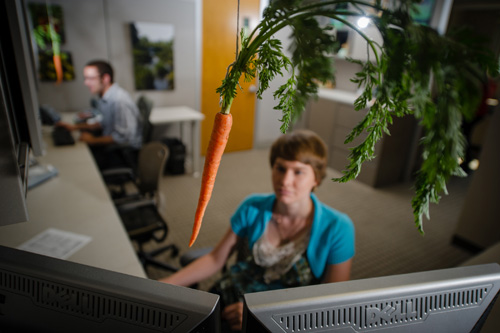 A study co-authored by MSU business scholar Karen Sedatole suggests workers respond better to the promise of reward, or carrots, than they do the threat of punishment, or sticks. Photo illustration by G.L. Kohuth

The researchers conducted a scientific experiment in which participants played the role of supervisor and employee. Some employees were subjected to a bonus program implemented by the supervisor, while others worked under a penalty system.

Employees subjected to the bonus exhibited more effort and this was driven by greater trust in the supervisor. Sedatole said the study is the first to identify this trust factor.

“What this means for companies is that employees who receive bonuses for their efforts will work even harder, increasing productivity and potentially bolstering profits,” Sedatole said. “But those subjected to penalties tend to distrust the supervisor and, because of that, work less hard.”

Examples of penalties in the business world include pay reduction, demotion and sanction or other disciplinary action, such as a salesperson with lower performance getting less territory to work.