From the Mouths of Monkeys: New Technique Detects TB

Tuberculosis can be a serious threat to monkeys and apes. A new technique for detecting the tuberculosis -causing bacteria could help in protecting the health of primate populations. The method can spot TB even among infected primates that show no outward sign of disease, but are still capable of spreading infection to others of their kind.

Existing tests for TB in primates are difficult to apply and give unreliable results, often failing to detect infections.

With the new approach, researchers obtained the first published evidence of TB pathogens in the mouths of Asian monkeys living near people. The study appears in the latest issue of the American Journal of Primatology. Dr. Lisa Jones-Engel, a senior research scientist at the National Primate Research Center at the University of Washington, headed the international project.

Her team worked in six Asian countries and the Rock of Gibraltar, places where people come into frequent contact with macaques. The monkeys are kept as pets, or live in temples, range freely throughout urban neighborhoods, reside in nature parks or zoos, or perform as entertainers. 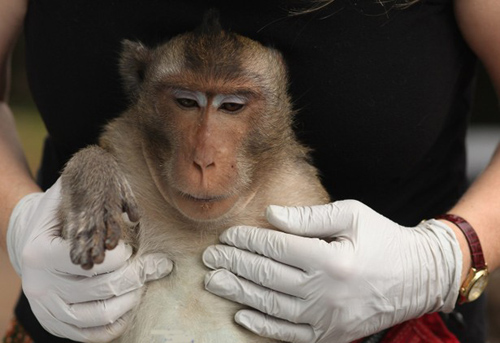 A macaque in Asia is held after her TB test. Image credit: Lynn Johnson

The researchers took cheek swabs or tossed the monkeys tasty chew sticks to obtain samples from the oral cavity, as TB usually enters and exits the body through the mouth and nose. The scientists then analyzed the specimens to look for DNA from tuberculosis bacteria. They applied a test designed by UW National Primate Research Center Alicia Wilbur and her colleagues, who study the origin and evolution of infectious disease. Their test amplifies a small segment of DNA known as IS6110 that exists only in certain species of mycobacteria, the causative agents of TB.

Tuberculosis DNA was found among the Asian monkey populations living in areas with high levels of human TB, but not in the Gibraltar macaques. TB prevalence in humans is relatively low in Gibraltar. About 32 percent of the Asian monkeys studied had evidence of TB DNA.

The results, said Dr. Gregory Engel, a Seattle physician and epidemiologist for the study, raise questions about inter-species transmission. The tuberculosis bacteria responsible for most cases of human infection originated about 3 million years ago. TB now affects about 2 billion people in the world. It’s not yet determined whether TB organisms evolved separately in human and non-human primates, or if there were repeated crossovers.

The researchers hope that advances in DNA analysis might reveal the strain of TB present in an individual or a primate population. The new detection technique for TB DNA in primates also holds promise for better understanding transmission patterns of the disease.

“TB is an exceptionally challenging disease to control,” Engel said, “as infected individuals may carry the bacteria in an inactive state, and disease reactivation can occur, especially if the animal is stressed.” 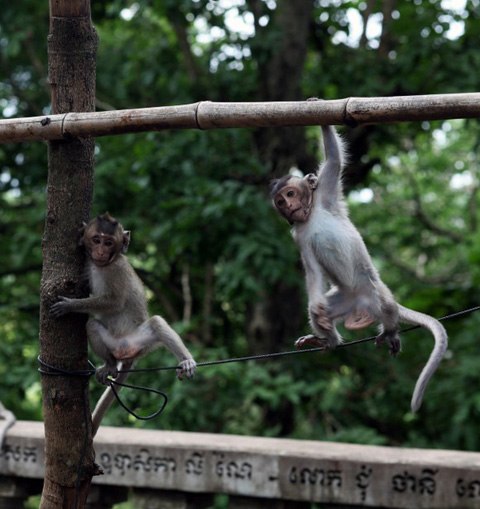 A key issue right now among scientists is primate-to-primate spread of TB. For example, primates that live around humans could conceivably become infected with TB, then come into contact with wild primates, and pass along the pathogen. This is a particular concern for conservationists trying to prevent the loss of endangered primate species. Zoos and primate centers also strive to prevent the introduction or spread of TB into their colonies for the safety and well-being of the animals, and for the integrity of research which uses primates to study health and disease.

As for human worries about acquiring TB from non-human primates, Engel said, “People are far more likely to acquire TB from other people than they are from monkeys.” Most people living among the macaques or tourists visiting the area do not have the kinds of close face-to face or nose-to-nose interactions that would put them at risk.

The project, “From the Mouths of Monkeys: Detection of Mycobacterium tuberculosis Complex DNA from Buccal Swabs of Synanthropic Macaques” was funded with grants from the National Institutes of Health’s National Center for Research Resources and the National Institute for Allergy and Infectious Diseases, the Defense Advanced Research Projects Agency, the Chicago Zoological Society and the University of New Mexico Research Allocations Committee. The researchers were assisted by the communities, temple committees, nature reserves, universities, and government agencies in the study locations. 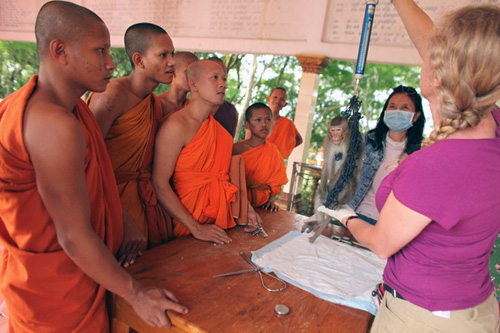 In addition to Lisa Jones-Engel, Gregory Engel, Alicia Wilbur and Gunwha Oh, all of the Evolutionary Emergence of Infectious Diseases Laboratory at the UW National Primate Research Center, the researchers on the study were Aida Rompis and I.G.A. A Putra, both of the University of Udayana, Bali, Indonesia; Benjamin P. Y. -H. Lee of Nature Parks, National Parks Board, Singapore; Nantiya Aggimarangsee of Chiang Mai University, Thailand; Mukesh Chalise of Tribhuvan University, Nepal; Eric Shaw of the Gibraltar Ornithological and Natural History Society; and Michael A. Schillaci of the University of Toronto-Scarborough Toronto, Canada.