Since 1994 cancer doctors affiliated with the Alpert Medical School have had a place with funding, administrative, and collegial support to develop and test novel cancer treatments: The Brown University Oncology Research Group.

PROVIDENCE, R.I. [Brown University] — Too few cancer patients, especially those with pancreatic cancer, get to the point that Raymond Sabella reached in the spring of 2014. Ten months after he began his trek from the diagnosis of an inoperable tumor to experimental chemotherapy and then radiation, he reports feeling great. He’s gaining back some of the weight he lost, but not too much, and something else is back, too.

“I wish I had ‘before’ and ‘after’ pictures because once I started going through the chemo, and you lose your hair, I was completely bald,” said Sabella, a 63-year-old retired factory worker from Warwick and enthusiastic fan of the Brown Bears, the PawSox, and other local teams. “Now that I’ve gone through so many months without hair, it’s nice to see it again.

What’s gone as of late January – hopefully forever – is the tumor that doctors at Kent County Hospital first discovered in Sabella’s pancreas last June, he said.

Whenever “after” seems better than “before” in cancer, there is reason to be hopeful. What’s more, the experimental course of chemotherapy that may have contributed to Sabella’s apparent progress was not the product of some massive pharmaceutical company but the brainchild of local doctors with support from private donors and grassroots fundraising efforts such as a bike-a-thon. Sometimes they also receive small grants.

“We got an idea and said we were going to do this,” said Dr. Howard Safran, who led the trial.

That’s how it works at the Brown University Oncology Research Group. For 20 years BrUOG has provided the administrative and financial infrastructure (a new walk-a-thon takes place May 4) for Rhode Island cancer specialists to develop and test their best ideas for fighting the disease in its many forms. 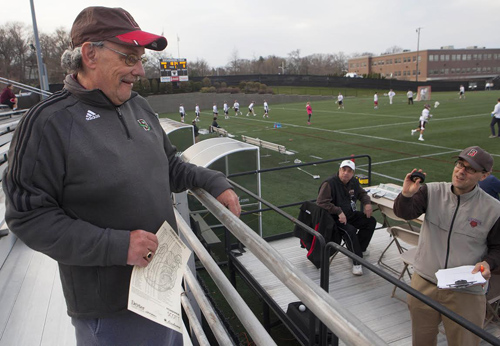 Beating the odds. Raymond Sabella, a 63-year-old retired factory worker from Warwick, is a huge fan of Brown sports — and of BrUOG, the cancer research group. An experimental cancer treatment may have helped in his case. “I was ecstatic. [The researchers] were very surprised.” Photo by Mike Cohea/Brown University

A score of years, scores of trials

In 1994, none of Rhode Island’s hospitals was big enough to sustain even small cancer trials, said Safran, BrUOG’s medical director, a Brown professor of medicine, and a Lifespan physician.

“To be successful, you have to have enough patients to complete your study,” Safran said. “So we thought that if all the hospitals got together – this was before Lifespan or any mergers – we thought collectively we could compete [with other cancer centers]. We looked at Brown as a neutral ground and so we put our central office at Brown and all the hospitals decided they would be part of it.”

The first trial that put BrUOG on the map was a study led by BrUOG founder Dr. Hak Choy, a former Brown professor, who showed that the ovarian and breast cancer drug paclitaxel also made radiation more effective in treating lung cancer.

“That work has really been enduring,” Safran said. “That work has become the standard of care that is still used around the world.”

Further BrUOG studies, led by Safran, extended it to esophageal and stomach cancer. Safran and colleagues have also made other advances against esophageal cancer by trying out a drug called trastuzumab, which had shown some efficacy in breast cancers associated with a genetic mutation called HER2.

When BrUOG researchers discovered that HER2 was also found in esophageal cancer, they designed a trial combining trastuzumab with taxol and radiation.

“We treated 19 Rhode Islanders and we thought it worked terrifically,” Safran said. Seven years later the idea gained further support in a much larger study in Asia and Europe. And now there’s a major national study in the United States.

“That work is based on a Brown study,” Safran said. “That’s a really cool thing.”

Over the years BrUOG has involved dozens of local doctors, working with a wide range of experimental treatments for cancers all over the body. Twenty years into the effort, they have treated roughly 3,000 Rhode Island patients in scores of small “phase I” or “phase II” trials. They collaborate with similar groups around the country as well.

Meanwhile, with a staff of two, BrUOG not only helps finance trials but also supports them logistically with the needed regulatory filings, data collection and management, safety monitoring, and other essential functions that safeguard patient care and trial integrity throughout the process.

Hepel is now leading his second BrUOG-supported trial in which he’s studying a noninvasive but precise means of delivering radiation to the site of breast lumpectomies. Rather than delivering radioactive material via catheters or other implants, the technology he’s studying, called AccuBoost, essentially zaps the tumors. It’s precise because it targets imaging markers left in the surgical area and because the breast is held firmly in place during radiation (but with much less pressure than in a mammogram).

The current trial “BrUOG 291,” is meant to assess how patients tolerate a five-session course of treatment that conveniently can be performed in less than a week. Hepel expects the dose to be as effective as standard care, but he is checking for cosmetic outcomes, skin irritation or other possible side effects.

Meanwhile, Dr. Kimberly Perez, assistant professor of medicine and a physician at Rhode Island Hospital and The Miriam Hospital, has been working through BrUOG to understand the underlying genetics of rectal cancer and to develop better treatments. She said the group’s support is part of what convinced her to practice in Rhode Island.

“The Brown University Oncology Research Group was a significant factor in my decision to take the job at RIH/TMH Cancer Center,” she said. “It has provided me with opportunities to ask critical questions in GI oncology clinical care and develop protocols in which to answer them. As a result it has provided me with the opportunities for growth as a clinical scientist locally and on the national stage in cancer clinical research.”

She means that literally. Later this spring she’ll speak about some of her BrUOG-supported results at the American Society of Clinical Oncology Conference in Chicago.

Not all studies succeed, of course. Safran spent years trying to make headway against pancreatic cancer without breakthroughs. But recently he hit on the formulation that Sabella received. Overall, Safran said, those results have been more encouraging.

The idea was to tinker with a four-drug chemo cocktail first developed in France, called FOLFIRINOX. Safran wanted to try swapping out one of the component drugs for a different one called Abraxane. He dubbed that version FOLFOX-A.

Safran and colleagues put together a trial of 26 Rhode Island patients to see if it could make a difference in longevity and in shrinking tumors.

“We think it is a better regimen,” Safran said. “It’s more active and less toxic.”

That was convincing to Sabella, who like all patients, had to provide informed consent to receive an experimental treatment.

“I agreed to it. At first I was a little apprehensive but I said, you know, what have I got to lose,” Sabella said.

He received FOLFOX-A treatments. The tumor shrank considerably, Sabella said, according to a CT scan he received in the fall. Then between Thanskgiving until just after the new year he received radiation with Dr. Kara Leonard at Rhode Island Hospital.

“A little bit after that (Jan 29) they did another CAT scan,” Sabella said. “The tumor was gone. It was no longer there. I was ecstatic. They were very surprised.”

“I owe my life to this Brown study program and to Dr. Safran and his entire staff,” he said. “I tell everyone what I’ve been through. People are really amazed because when you say pancreatic cancer they don’t expect you to live. They don’t expect me to look like I do.”

It may still be too soon for those expectations to change, but it’s what everyone involved BrUOG is working for.