A new device deciphers the language of cells

A biomedical engineer listens in on what proteins are saying.

As inventions go, Yale biomedical engineer Rong Fan’s entry into the innovation sweepstakes is not much to look at. Fan’s device, impressively named a single-cell, 45-plex protein secretion measurement platform, seems to be little more than a sandwich of two sheets of clear silicon rubber the thickness of window glass, each sheet a bit smaller than a credit card and bearing a smaller, darker rectangle divided into 14 vertical sections. It has no flashing lights, no intriguing noises, no moving parts, no signs of Applesque high design. Indeed, the object, displayed in Fan’s bustling laboratory on the first floor of the Daniel L. Malone Engineering Center, doesn’t appear to be doing anything at all.

Appearances deceive. Fan, a soft-spoken wizard of the nanorealm, has crafted an unprecedented way to trap individual cells as they travel highways only a billionth of a meter wide. In that same device, the engineer has incorporated a technology akin to supermarket barcodes that enables him to learn and listen to the language of cells. Collaborators at the School of Medicine and other universities, pharmaceutical companies, and government laboratories are starting to use Fan’s invention to uncover the hidden details of the cells’ stories. These investigations—all in their early stages—could help scientists make medical discoveries that lead to more effective vaccines, precision-targeted medications, a better understanding of autoimmune diseases, and even optimal strategies for diagnosing and treating such perplexing ailments as prostate cancer, glioblastoma, and myeloproliferative disorders.

“The potential applications are very broad,” said Fan, who has spun off a company called IsoPlexis to commercialize the device. “We’re entering the era of cellular medicine.” 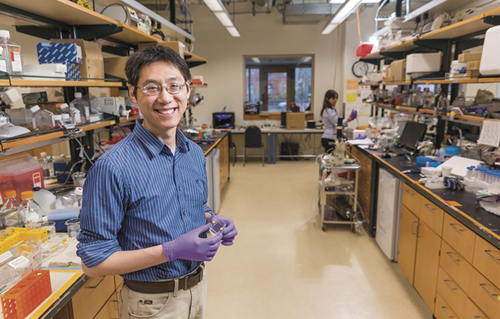 Biomedical engineer Rong Fan has developed a device that reveals a cell’s nature based on the proteins it secretes. “Cells use proteins to talk to each other,” he says. “I wanted to know what they were talking about.” (Photo by Robert A. Lisak)

How cells talk to each other

Human cells come in many shapes and sizes. In recent years, scientists have discovered that they can identify and characterize cells in both the immune system and in tumors by the suite of proteins they secrete. This proteomic signature, which may have dozens of individual components, gives researchers and physicians alike important clues that they can use to, say, zero in on the cells that are instrumental in producing the right immune system response or those in a tumor that reveal its intentions, its vulnerabilities, its response to treatment, and its likely future direction. For example, in a patient diagnosed with a myeloproliferative neoplasm (MPN)—a chronic precancerous disorder of the bone marrow—the device could detect which cells in a population are secreting cytokine proteins that signal a high likelihood of MPN’s morphing into leukemia. In theory at least, this early warning could help researchers develop effective drugs that doctors could unleash at a time when a cure is most likely.

“Proteins are just like the words of a language,” said Fan. “Cells use proteins to talk to each other, and I wanted to know what they were talking about.”

Currently available tools like flow cytometers and mass cytometers do at least part of the listening job, but the devices are expensive and generally found only in major research centers like the School of Medicine. And because existing technologies can detect just a few of the many proteins secreted by cells, they give researchers sentences with many missing words. Filling in the blanks is vital to understanding cancer and other diseases. “A tumor is like a community—it’s filled with all sorts of different cells talking to each other,” said Fan.

Getting a complete picture of tumor heterogeneity is important, Fan explained, because “what’s happening in the tumor microenvironment often determines the progression of the disease.” So Fan devised what is essentially a high-tech listening device—a way to isolate individual cells and record the stories they tell through the proteins they secrete—as many as 45 at a time. Not only can the simple, relatively inexpensive, and eminently portable platform provide more relevant information than any available detector, it can do so with the most minuscule of biological samples: a drop of blood or a tiny bit of tissue from a fine-needle biopsy.

“With the handheld device we’re refining, we may be on the verge of an important transition in medicine—from qualitative to a much more quantitative analysis of a patient’s response to treatment,” said Kara Brower, a 2013 Yale engineering grad who worked in Fan’s lab and is presently chief technology officer of IsoPlexis.

From chemistry to nanotechnology

It’s too early to know whether Fan and his company have a game changer. But the fact that he’s in the game at all is something that few people, Fan included, would have predicted when he was growing up in China. “My interest in science was driven simply by curiosity,” he said, adding that when he came to the United States as a graduate student at the University of California, Berkeley, he had “very little interest in biology or biomedical research.”

At Berkeley, Fan pursued a doctorate in chemistry and focused on better ways to make nanotubes and nanowires. But when he discovered that nature was already working on the scale of a billionth of a meter, Fan became hooked on biology. For his postdoctoral work, he opted for a more applied—and biomedical—career path at the California Institute of Technology and its NanoSystems Biology Cancer Center. There, Fan worked with James Heath, Ph.D., a nanochemist with a penchant for translational medicine and formidable inventive skills. On his lab’s website, Heath notes that “we focus on the fundamental scientific bottlenecks that, if solved, can provide keys toward solving much larger problems.”

Fan would soon find some appropriate bottlenecks to tackle. One came from researchers looking for a better way to evaluate responses to vaccines by putting together a complete profile of the proteins secreted by single T cells. Another came from Fan’s search for devices that could uncover the proteomic fundamentals of cancer cells. In both cases, “the bottleneck was technology,” he said.

Fan realized that the solution lay in the nanotechniques he’d mastered at Berkeley. The proteins secreted by one cell in a normal-size test tube might be too low to detect easily—but put that same cell in a test tube about one-hundred-thousandth the diameter of a human hair, and the concentration of its tell-all secretions increases to the point of readability. “I’m pretty good at making things smaller and smaller,” Fan said.

At Caltech, Fan developed “one sexy-looking machine”—sexy, at least, to a nanoscale engineer adept at crafting minuscule chambers in clear plastic rectangles. The flow of cells was controlled by a pumping system that could handle fluid flow in tiny pipes. The individual cells were then isolated and allowed to interact with specific antibodies in a second microchamber to generate what researchers call a barcode, which reveals the individual identities of a multitude of secreted proteins.

The device proved too complicated to use easily, so Fan, who joined Yale’s School of Engineering and Applied Sciences in 2010 as an assistant professor of biomedical engineering, built the proverbial better mousetrap. The new model has some 4,000 microchambers, and by rethinking his initial design, Fan eliminated the need for pressure to move cells around. “Now everyone can use this device,” he explained.

A number of Fan’s colleagues at the medical school are doing just that. Immunologist Joseph Craft, M.D., the Paul B. Beeson Professor of Medicine, professor of immunobiology, and section chief of rheumatology, is working with the engineer to profile the CD4 T cells that play a role in the development of such autoimmune diseases as lupus. Richard Flavell, Ph.D., chair and Sterling Professor of Immunobiology, is using the device to better categorize cells critical to regulating the immune response. Fan also has developed collaborations with researchers at the Memorial Sloan-Kettering Cancer Center and the National Institutes of Health.

But the partnership with perhaps the most immediate payoff is with Peter Schulam, M.D., Ph.D., professor and chair of urology, and a skilled surgeon who specializes in the treatment of prostate cancer. Fan and Schulam are developing a two-part strategy to better deal with this disease—the most common cancer among men in the United States and the second leading cause of male deaths from cancer.

Prostate cancer poses one of the most difficult health care dilemmas for patients and physicians alike. “Not all, or even most, prostate tumors need to be treated,” said Schulam. “Some are what we call indolent: They won’t grow or spread over your entire lifetime, and they cause no functional problems. But because we can’t currently differentiate the indolent tumors from the aggressive ones—the ones that can kill you—we overtreat.”

Almost every man past 50 has had a digital rectal exam and the controversial blood test that looks for a marker called the prostate-specific antigen or PSA. If the results are suspicious, the patient is sent for a biopsy. If the pathologist assigns what’s called a Gleason score in the intermediate-to-high range to the cellular architecture of the prostate sample, the patient is sent for treatment—typically either surgery to remove the prostate or radiation to destroy the tumor. “But these are not benign procedures, and each has significant morbidities, such as impotence and incontinence, that can radically alter your quality of life,” said Schulam. “So it’s critically important for us to learn how to distinguish patients who need treatment from those who do not.”

The urologist is refining an imaging system that will enable physicians to take targeted biopsies of the prostate, and a subset of those cells will go to Fan’s lab to be placed on the device and characterized. The resulting proteomic profile will, the two researchers believe, enable physicians to more easily—and less subjectively—read the minds of prostate tumors and single out only the bad actors for treatment. “We’re trying to increase our confidence level,” said Schulam. “What excites me most about Rong’s technology is that it gives us the opportunity to address a significant clinical problem and have a potentially great impact.”