AUSTIN, Texas — A new method of measuring the interaction of surface water and groundwater along the length of the Mississippi River network adds fresh evidence that the network’s natural ability to chemically filter out nitrates is being overwhelmed.

The research by hydrogeologists at The University of Texas at Austin, which appears in the May 11 edition of the journal Nature Geoscience, shows for the first time that virtually every drop of water coursing through 311,000 miles (500,000 kilometers) of waterways in the Mississippi River network goes through a natural filtering process as it flows to the Gulf of Mexico.

The analysis found that 99.6 percent of the water in the network passes through filtering sediment along the banks of creeks, streams and rivers. 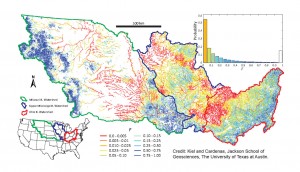 Map and probability distribution of the fraction of laterally exchanged water (F) for the Mississippi River network. Map shows the fractional amount of surface water that is likely to enter the hyporheic zone, where it can undergo filtration. Orange and red represent areas experiencing a lower fraction of water entering the hyporheic zone. Dark blue areas approach 100% likelihood water will enter the zone. Image credit: University of Texas at Austin (Click image to enlarge)

Such a high level of chemical filtration might sound positive, but the unfortunate implication is that the river’s natural filtration systems for nitrates appear to be operating at or very close to full capacity. Although further research is needed, this would make it unlikely that natural systems can accommodate the high levels of nitrates that have made their way from farmland and other sources into the river network’s waterways.

As a result of its filtration systems being overwhelmed, the river system operates less as a buffer and more as a conveyor belt, transporting nitrates to the Gulf of Mexico. The amount of nitrates flowing into the gulf from the Mississippi has already created the world’s second biggest dead zone, an oxygen-depleted area where fish and other aquatic life can’t survive.

The research, conducted by Bayani Cardenas, associate professor of hydrogeology, and Brian Kiel, a Ph.D. candidate in geology at the university’s Jackson School of Geosciences, provides valuable information to those who manage water quality efforts, including the tracking of nitrogen fertilizers used to grow crops in the Midwest, in the Mississippi River network.

“There’s been a lot of work to understand surface-groundwater exchange,” said Aaron Packman, a professor in the Department of Civil and Environmental Engineering at Northwestern University. “This is the first work putting together a physics-based estimate on the scale of one of these big rivers, looking at the net effect of nitrate removal in big river systems.”

Using detailed, ground-level data from the United States Geological Survey (USGS) and Environmental Protection Agency, Cardenas and Kiel analyzed the waterways for sinuosity (how much they bend and curve); the texture of the materials along the waterways; the time spent in the sediment (known as the hyporheic zone); and the rate at which the water flows through the sediment.

The sediment operates as a chemical filter in that microbes in the sand, gravel and mud gobble up compounds such as oxygen and nitrates from the water before the water discharges back into the stream. The more time the water spends in sediment, the more some of these compounds are transformed to potentially more environmentally benign forms.

One compound, nitrate, is a major component of inorganic fertilizers that has helped make the area encompassed by the Mississippi River network the biggest producer of corn, soybeans, wheat, cattle and hogs in the United States.

But too much nitrogen robs water of oxygen, resulting in algal blooms and dead zones.

Although the biggest sources of nitrates in the Mississippi River network are industrial fertilizers, nitrates also come from animal manure, urban areas, wastewater treatment and other sources, according to USGS.

Cardenas and Kiel found that despite an image of water flowing freely downstream, nearly each drop gets caught up within the bank at one time or another. But not much of the water — only 24 percent — lingers long enough for nitrate to be chemically extracted.

The “residence times” when water entered the hyporheic zones ranged from less than an hour in the river system’s headwaters to more than a month in larger, meandering channels. A previous, unrelated study of hyporheic zones found that a residence time of about seven hours is required to extract nitrogen from the water.

Cardenas said the research provides a large-scale, holistic view of the river network’s natural buffering mechanism and how it is failing to operate effectively.

“Clearly for all this nitrate to make it downstream tells us that this system is very overwhelmed,” Cardenas said.

The new model, he added, can be a first step to enable a wider analysis of the river system.

When a river system gets totally overwhelmed, “You lose the chemical functions, the chemical buffering,” said Cardenas. “I don’t know whether we’re there already, but we are one big step closer to the answer now.”