When you hear Lego, if all you think about are shiny, plastic bricks and toys, think again. From a toy concept brought to life by a carpenter to tales of failed innovation truths that mirrored a Greek tragedy, the Lego story is about innovation and evolution, David Robertson told attendees at last week’s Chaplin Tyler Executive Leadership series lecture.

Robertson, professor of practice at the Wharton School at the University of Pennsylvania, presented “Rebuilding Lego” to 80 students, faculty, staff and community members on the University of Delaware’s Newark campus.

“What Robertson will show us is that this is not just a story about toys or how companies make toys,” said Bruce Weber, dean of the Alfred Lerner College of Business and Economics, who introduced the lecture. “This is more about how organizations deal with innovation and change in their environments and how they adjust when market conditions change.” 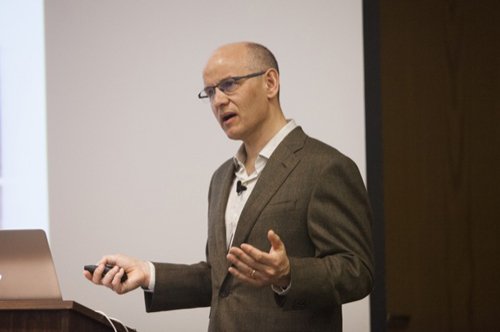 Taking a nod from its namesake – the company’s name comes from the Danish “leg godt,” or playing well, which happens to have an equally appropriate Latin meaning of “I put together” – Lego’s goal has long been to personalize the play experience, or in the words of Christiansen’s oldest son and second company leader, Godtfred, to develop a system for play.

Despite a few hiccups here and there, the company faced slow and steady growth through 1978 when sales went on an unprecedented tear.

“They brought out more themes like pirates, the Wild West, trains and space, they expanded into North America and all over Europe, they brought out the Technic line for teens and created the first minifigure,” said Roberston. “And the result was Lego went on this amazing run where for 15 years they doubled in size every five years, so 14 percent annual growth rate from 1978 to 1993.”

That growth reached a lull in 1994, as many companies will often reach a linear point, said Robertson, and through 1998 there was really no change in sales.

“They wanted to continue their earlier growth, though, so they put more toys out on the market,” said Robertson. “They actually tripled the toys on the market but that made the costs go up and with flat sales, the profits go down. So they faced a loss for the first time in company history in 1998.” 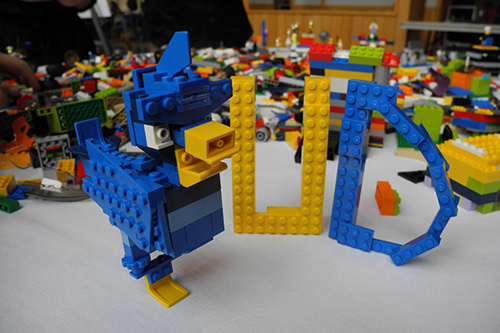 UD students were given an opportunity for Lego play, which resulted in a Blue Hen. Photos by Ambre Alexander and courtesy of Blue Hen Says

In addition to the loss, Lego was now facing the move by children from traditional toys to video games, the shift of competitors sending production to China lowering their prices, the consolidation of retailers in major markets and, distinctively for Lego, expiring patents resulting in other Lego-like toys.

As the company tried to understand the changing markets, it turned to seven innovation “truths,” said Robertson.

Lego rolled out a new mission statement in 2000: “We want the Lego brand to become the world’s strongest brand among families with children by 2005.” They also looked to reinstate the growth from the 1980s.

The company sought “blue ocean” or underserved markets by appealing to toddlers with a line of electronic toys that played music or told stories; they also created the Galidor toy line for older children, which incorporated electronic games in the toy.

Lego explored the full spectrum of innovation, from products, services and channels to market to business models and customer experiences. They opened Lego Education Centers aimed at helping students understand science, engineering and math through Legos, and expanded their network of Legoland theme parks in Germany, the UK and the US.

They sought open innovation and looked outside the company for new ideas; thought outside the box through disruptive innovation; built an innovation culture; and walked in their customer’s shoes.

Through the Bionicles toy, Lego produced books, movies, clothing and accessories to add to the toy line each year while the Jack Stone line also appealed to an estimated group of children who didn’t like construction toys. Lego worked with outside partners to develop software and virtual experiences, and based toy lines on Harry Potter and Star Wars.

Finally, Lego hired diverse and creative people by opening offices from Copenhagen to Milan to Tokyo to San Francisco. 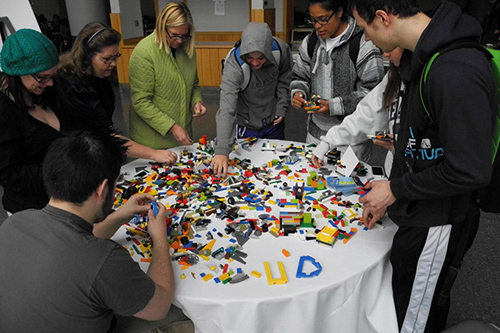 But ultimately each innovation truth only worked temporarily and in 2003, the company almost went out of business.

“The best analogy is the 1995 Darwin Award winner,” said Robertson of the awards that honor individuals who die in “spectacularly stupid ways because they prove Darwin’s theory of evolution.”

Although the 1995 winner is an urban legend about a man who died after strapping a jet assisted takeoff unit to his car to break the world record for ground speed, Robertson’s point was about control.

Moving on to an analogy of an airplane guidance system, Robertson explained that there are all sorts of dials and buttons – or points – to consider: direction, for where you want to go; position, for determining where you are now; and control, how you make adjustments to get where you need to be.

All of these things together, said Robertson, are helping the company to guide creativity and make sure there is not just an innovation culture, but profitable innovation.

The UD community had the opportunity to engage in Lego play prior to Robertson’s lecture.

Spearheaded by Don Shenkle and supported by Ryan Maguire in the Office of Communications and Marketing, a table of Lego toys was set up in the Trabant University Center inviting passersby to put a moment of play into their day.

Posts on UD’s social media drew in students whose creativity was in full swing, as hundreds of Lego bricks morphed into airplanes, battles with mini figures and even a toy brick Blue Hen.

Separate but related, a project in the Red Clay Consolidated School District is putting students to play with Lego.

Based on the premise that Legos are not just toys but tools for teaching concepts about science, engineering and math, the goal for Red Clay students along with staff, parents and community, is to build a 110-foot freestanding Lego tower.

In an effort to support the Red Clay project, the Lerner College has placed a box in the Dean’s Office, 302 Alfred Lerner Hall, where anyone in the UD community can bring their unused or outgrown Legos to help the school reach its goal of collecting 300,000 pieces.

The donation box will remain in the Dean’s Office through May 31.

For more information on the project, visit the Red Clay “Looking for Legos” webpage.