Mangroves, the dense forests found along tropical and subtropical coastlines, have some specialized trees that can take in air through their roots at low tide and excrete salt right out of their leaves. The unusual ecosystems can also absorb large amounts of carbon dioxide, making them a natural solution for controlling greenhouse gases.

Disrupt them, however, and they’ll put that carbon right back into the atmosphere.

Sunny Jardine, an assistant professor of marine policy who joined the University of Delaware’s College of Earth, Ocean, and Environment earlier this year, studies the environmental benefits of mangroves and the economics behind their deforestation.

“You can avoid all these emissions if you can convince them to stop deforesting the mangroves,” Jardine said. 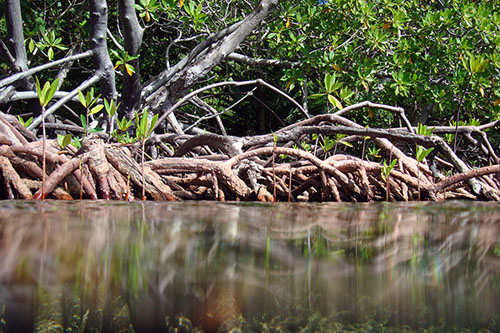 Mangroves, such as this one in the Virgin Islands, are significant absorbers of carbon dioxide. Photo credit: U.S. Geological Survey/Photo by Caroline Rogers

Last year she and Juha Siikamaki of Resources for the Future (RFF) co-authored a paper in the Proceedings of the National Academy of Sciences on carbon dioxide emissions from mangrove loss, along with James Sanchirico of RFF and the University of California, Davis. Protecting mangroves for their carbon, they found, can make both environmental and economic sense.

The researchers since expanded their scope to take a global look at carbon stored in mangroves, seagrasses and salt marshes, collectively called “blue carbon.” Their analysis was published in the November-December 2013 issue of Environment magazine. 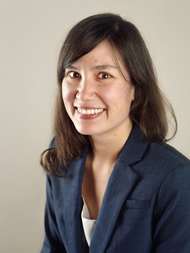 Blue carbon ecosystems are found all over the world, especially in the tropics. They serve as habitat for fish, birds, crustaceans and marine mammals, while also protecting the coast from flooding and erosion.

These environments are rapidly disappearing, however, at rates comparable to inland tropical forests. Mangroves, for example, have shrunk by more than 40 percent worldwide over the past several decades. Agriculture, shrimp farms and coastal construction are among the primary causes for the loss.

Destroying the ecosystems releases considerable amounts carbon dioxide from the vegetation and soil underneath. Not only is the greenhouse gas released, but the capacity for capturing and storing carbon long-term is diminished.

Jardine and her colleagues calculated how large blue carbon ecosystems are, how much carbon they contain and can trap, and whether incentives to curb deforestation would be cost-effective.

“Since the concept of blue carbon is really new, people want to know where they should target their conservation dollars — and whether or not blue carbon is actually a good place to allocate money that’s supposed to mitigate carbon emissions,” Jardine said.

The researchers found that per hectare (about 2.5 acres), blue carbon ecosystems store a relatively large amount of carbon, with much of it trapped in soils. Mangroves have up to four times as much carbon as other types of forests, with one hectare storing the equivalent of annual emissions from 330 cars in the United States. Global mangrove carbon storage is on par with emissions from the entire U.S. economy over four years, the researchers found.

One way to keep that carbon locked in ecosystems and not released into the atmosphere is for governments to distribute blue carbon credits. The credits would be offered to coastal developers, say a farmer looking to create a field or a fisherman planning to make a shrimp pond, to halt deforestation and offset their forgone revenue.

The researchers made an estimated cost of such credits based on current conditions and found that saving mangroves is a relatively low-cost way to address carbon dioxide emissions. They discovered that in many parts of the globe, preventing a ton of carbon emissions from being released from mangroves is less expensive than other strategies in place.

Studying the economics of conservation has been a theme in Jardine’s academic work. Her dissertation at the University of California, Davis, focused on a salmon fishery in Alaska. She developed a model to show that catching salmon early in the spawning season, when prices are highest, means targeting the subgroup of salmon that spawn farthest upstream and arrive first at the mouth of a river. That approach inadvertently alters the genetic pool of the population and may impact the value of the fishery.

In ongoing projects at UD, Jardine will work on a bio-economic analysis of horseshoe crab management and examining the cost of eradication of invasive seagrasses in California.

She will also continue refining her analysis of blue carbon and mangroves, an environment she saw firsthand growing up in Hawaii. There, she said, preserving the natural environment has long been important to the local economy and tourism.

“Really early on, I was interested in conservation and the trade-offs we make between different uses of natural resources,” she said.