The findings, published online Dec. 4 in Proceedings of the Royal Society B, show that while many birds signal their intentions clearly, other “strong silent types” go immediately to aggressive behavior and ultimately attack without first signaling their intentions.

“The results are the first to explicitly link individual differences in a personality variable to communication in a wild animal,” said lead author Çağlar Akçay, who did the study when he was a UW graduate student. He is now a postdoctoral associate at the Cornell Lab of Ornithology. 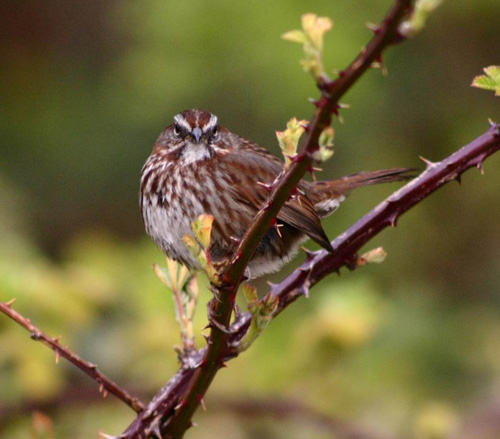 As any pet owner can attest, animals have consistent individual differences, or personalities. Some may be more aggressive or bold, shy or laid back. Such personality differences have been noted in a number of species ranging from insects to primates and, of course, humans. But the role of personality in animal communication has not been studied.

“There is a growing realization in the field that factoring in personality variables will help solve many thorny problems in animal behavior, such as do animals signal honestly,” said Michael Beecher, co-author and a UW professor of psychology and biology.

In other words, if a bird knew the personality of its opponent, it would have a better understanding of when to expect an attack.

Akçay and Beecher studied 69 male song sparrows (Melospiza melodia) in Discovery Park in Seattle. The birds are year-round residents that spend most of their time in their territory, defending it from intruders.

From September 2009 to May 2010 and again in spring 2011, the researchers observed the birds as part of a larger experiment looking at how sparrows communicate while defending their territories (see previous story).

In the current study, the researchers report their observations of the birds’ behaviors in response to a simulated intruder. They counted:

All of these behaviors are reliable predictors that a bird will attack an intruder.

Over time, the researchers observed that each bird they studied exhibited a consistent amount of aggressive and signaling behavior.

“Some birds were just more aggressive than others,” Akçay said.

What’s more, when looking at birds that displayed similar levels of aggression, the researchers found that some of these birds consistently used more threat signals than other birds. Some actively threatened the intruder with soft songs and wing waves before attacking, while the “strong, silent types” skipped over the warnings and launched right into attack mode.

“This is an important result since it identifies a potential new dimension of animal personality that plays a significant role in how much a given animal will signal in an aggressive situation,” Akçay said. “This new personality dimension may also play a role in signaling in different contexts, such as courting a female or communicating danger about predators to mates and offspring.”

The researchers plan to test this personality trait, which they call “communicativeness,” in other social contexts.

Elizabeth Campbell, a UW research technician, is also a coauthor of the paper. The study was supported by the National Science Foundation.