EAST LANSING, Mich. — For his work on developing new treatments for tuberculosis, a Michigan State University researcher has been named a Grand Challenges Explorations winner, an initiative funded by the Bill & Melinda Gates Foundation.

Robert Abramovitch of MSU’s Department of Microbiology and Molecular Genetics is using a synthetic biosensor that glows green in response to conditions that mimic human tuberculosis infection. He will screen for compounds that target chronic TB infection and may help shorten therapy or treat multidrug-resistant TB, which does not respond well to existing antibiotics. 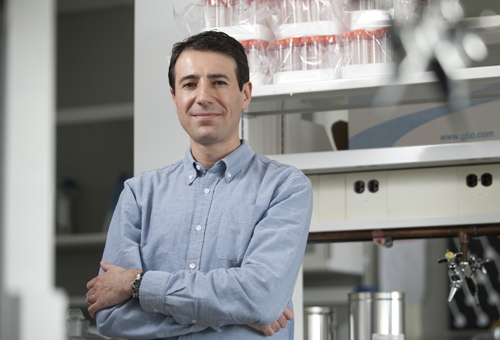 “Grand Challenges Explorations encourages individuals worldwide to expand the pipeline of ideas where creative, unorthodox thinking is most urgently needed,” said Chris Wilson, director of Global Health Discovery and Translational Sciences at the Bill & Melinda Gates Foundation. “We’re excited to provide additional funding for select grantees so that they can continue to advance their ideas toward global impact.”

To receive funding, Abramovitch and other Grand Challenges Explorations Round 8 winners demonstrated a bold idea in one of five critical global heath and development topic areas that included agriculture development, immunization and nutrition.

“Combating the ongoing tuberculosis epidemic represents one of the major challenges in global health,” said Abramovitch, who has appointments with MSU’s colleges of Veterinary Medicine and Human Medicine, and AgBioResearch. “The required multidrug, six- to nine-month treatment regimen has fueled the emergence of drug-resistant TB, and new treatments are needed to treat this dangerous disease and reduce the overall length of drug therapy.” 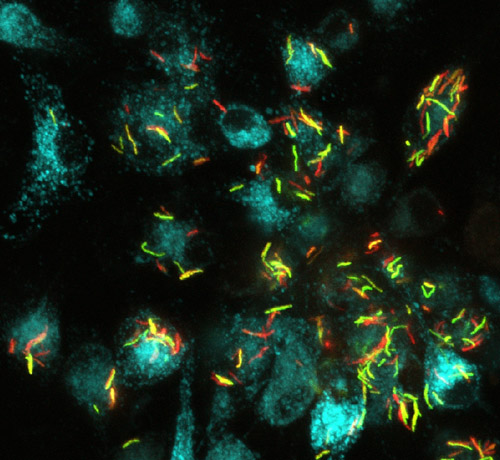 To accomplish that, Abramovitch is focusing on an oxygen sensing system naturally occurring in bacteria that the TB bug uses to establish a chronic infection. His project uses a biosensor that glows green when the TB bacterium senses low environmental oxygen, a cue for the bug to infect its host.

By screening more than 250,000 compounds for molecules that prevent TB from “seeing” that cue – essentially blinding the bug – he will find compounds that hinder the disease’s ability to maintain a persistent state and allow drugs to treat the disease quicker.

“Once we identify some of those compounds, we can focus on developing new treatments,” he said.

Launched in 2008, Grand Challenges Explorations is a $100 million initiative funded by the Gates Foundation. More than 600 people in 45 countries have received grants. The program, open to any discipline and organization, uses an agile, accelerated grant-making process with short two-page online applications and no preliminary data required.

Initial grants of $100,000 are awarded two times a year. Successful projects have the opportunity to receive a follow-up grant of up to $1 million.