Krzysztof Szalewicz, professor of physics and astronomy at the University of Delaware, and Rafal Podeszwa of the University of Silesia Institute of Chemistry in Poland have developed and validated a more accurate method for predicting the interaction energy of large molecules, such as biomolecules used to develop new drugs.

The research is reported as a communication in the April 27 issue of the Journal of Chemical Physics, which is the most highly cited journal in atomic, molecular and chemical physics according to Thomson Reuters. The journal is published by the American Institute of Physics. Despite appearing at the end of April, the paper was on the list of the 20 most-read articles in JCP for that month.

If you think of two molecules as a couple on a blind date, the UD method more accurately predicts their potential for attraction or repulsion. Such interactions are known as van der Waals forces after the Dutch physicist who defined them and won the 1910 Nobel Prize in physics. 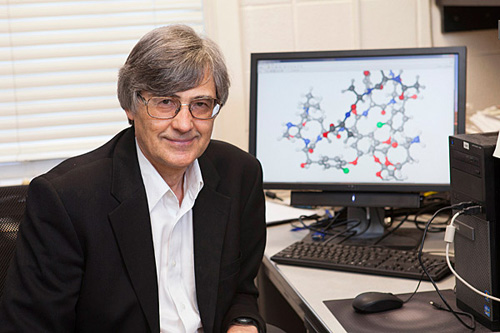 The UD method is expected to enhance existing theory by enabling scientists to more accurately calculate the energy of the van der Waals interactions between molecules located several angstroms apart, which is about one-millionth of the width of a human hair. Existing theory applicable to large molecules can model such interactions within only about one angstrom.

Szalewicz says the UD method of calculating the correlation between the motions of electrons in van der Waals clusters — technically referred to as the “dispersionless density functional plus dispersion method (dlDF+D)” — generates more accurate predictions for the interactions of large molecules than any other published approach. It is expected to have application in computational studies of clusters and condensed phases of matter, which include solids and liquids.

Szalewicz notes that some pharmaceutical companies, particularly in Europe, have established computational groups to predict various properties of drug molecules, in particular, the abilities of drugs to form different crystallographic structures called polymorphs.

Even the simplest drugs, such as Tylenol, have several polymorphs. If a different polymorph of a drug is crystallized in the production phase than the one intended, the therapeutic properties of this polymorph may be different and its application may even result in the death of patients, he says. The defense industry also increasingly is relying on computers to predict the properties of novel materials, such as bulletproof body armor.

“Better prediction of the properties of matter using computers is important to technological progress,” Szalewicz says. “Better software and computers can give you a little edge in investigating nature.”