Future prospects for superior new organic electronic devices are brighter now thanks to a new study by researchers with the U.S. Department of Energy (DOE)’s Lawrence Berkeley National Laboratory (Berkeley Lab). Working at the Lab’s Molecular Foundry, a DOE nanoscience center, the team has provided the first experimental determination of the pathways by which electrical charge is transported from molecule-to-molecule in an organic thin film. Their results also show how such organic films can be chemically modified to improve conductance.

“We have shown that when the molecules in organic thin films are aligned in particular directions, there is much better conductance,” says Miquel Salmeron, a leading authority on nanoscale surface imaging who directs Berkeley Lab’s Materials Sciences Division and who led this study. “Chemists already know how to fabricate organic thin films in a way that can achieve such an alignment, which means they should be able to use the information provided by our methodology to determine the molecular alignment and its role on charge transport across and along the molecules. This will help improve the performances of future organic electronic devices.”

Salmeron and Shaul Aloni, also of the Materials Sciences Division, are the corresponding authors of a paper in the journal NanoLetters that describes this work. The paper is titled “Electron Microscopy Reveals Structure and Morphology of One Molecule Thin Organic Films.” Other co-authors were Virginia Altoe, Florent Martin and Allard Katan. 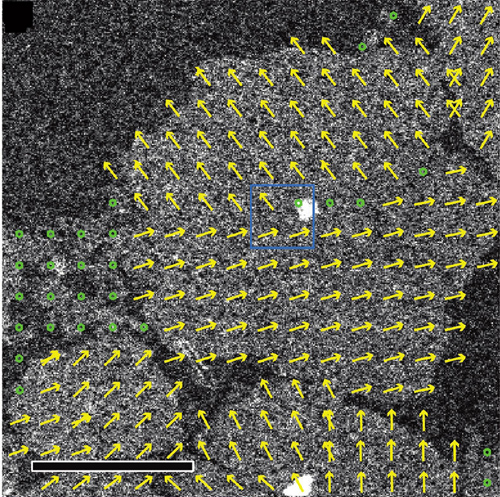 “Chemists and engineers have been using their intuition and trial-and-error testing to make progress in the field but at some point you hit a wall unless you understand what is going on at the molecular level, for example, how electrons or holes flow through or across molecules, how the charge transport depends on the structure of the organic layers and the orientation of the molecules, and how the charge transport responds to mechanical forces and chemical inputs,” Salmeron says. “With our experimental results, we have shown that we can now provide answers for these questions.”

In this study, Salmeron and his colleagues used electron diffraction patterns to map the crystal structures of molecular films made from monolayers of short versions of commonly used polymers containing long chains of thiophene units. They focused specifically on pentathiophene butyric acid (5TBA) and two of its derivatives (D5TBA and DH5TBA) that were induced to self-assemble on various electron-transparent substrates. Pentathiophenes – molecules containing a ring of four carbon and one sulfur atoms – are members of a well-studied and promising family of organic semiconductors. 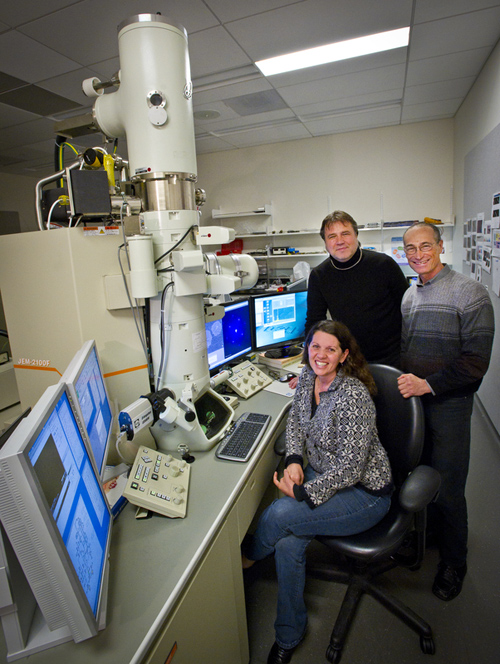 From left, Virginia Altoe, Shaul Aloni and Miquel Salmeron at the Molecular Foundry’s Imaging and Manipulation of Nanostructures Facility where they studied the structure and morphology of monolayer organic thin films. (Photo by Roy Kaltschmidt, Berkeley Lab)

“These organic molecules are extremely sensitive to high energy electrons,” he says. “When you shoot a beam of high energy electrons through the film it immediately affects the molecules. Within few seconds we no longer see the signature intermolecular alignment of the diffraction pattern. Despite this, when applied correctly, electron microscopy becomes essential tool that can provide unique information on organic samples.”

Salmeron, Aloni and their colleagues overcame the challenge through the combination of a unique strategy they developed and a transmission electron microscope (TEM) at the Molecular Foundry’s Imaging and Manipulation of Nanostructures Facility. Electron diffraction patterns were collected as a parallel electron beam was scanned over the film, then analyzed by computer to generate structural crystallographic maps. 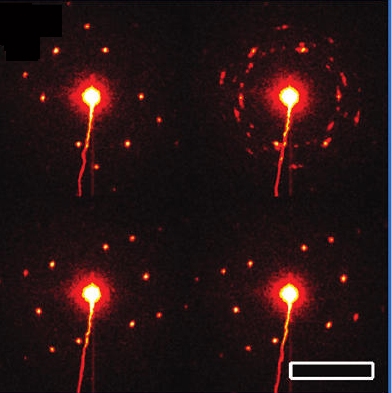 “These maps contain uncompromised information of the size, symmetry and orientation of the unit cell, the orientation and structure of the domains, the degree of crystallinity, and any variations on the micrometer scale,” says first author Altoe. “Such data are crucial to understanding the structure and electrical transport properties of the organic films, and allow us to track small changes driven by chemical modifications of the support films.”

In their paper, the authors acknowledge that to gain structural information they had to sacrifice some resolution.

“The achievable resolution of the structural map is a compromise between sample radiation hardness, detector sensitivity and noise, and data acquisition rate,” Salmeron says. “To keep the dose of high energy electrons at a level the monolayer film could support and still be able to collect valuable information about its structure, we had to spread the beam to a 90 nanometer diameter. However a fast and direct control of the beam position combined with the use of fast and ultrasensitive detectors should allow for the use of smaller beams with a higher electron flux, resulting in a better than 10 nanometer resolution.”

While the combination of organic molecular films and substrates in this study conduct electrical current via electron holes (positively-charged energy spaces), Salmeron and his colleagues say their structural mapping can also be applied to materials whose conductance is electron-based.

“We expect our methodology to have widespread applications in materials research,” Salmeron says.

Aloni and Altoe say this methodology is now available at the Imaging and Manipulation of Nanostructures Facility for users of the Molecular Foundry.