A multi-year report says the UA is a driver in the state’s economic development, but more coordination is needed among schools, business and the Legislature.

The University of Arizona and the state’s other colleges and universities have what it takes to produce the expertise needed to improve Arizona’s economy, says an international agency that has been monitoring the region for several years.

What’s needed, it says, is a better-coordinated effort among schools, businesses and policy makers to generate the human capital needed to drive regional growth. 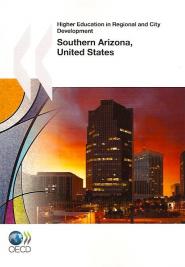 The 251-page "Higher Education in Regional and City Development: Southern Arizona, United States" was released on March 19 by the Paris-based Organisation for Economic Co-operation and Development. Image credit: University of Arizona

The Organisation for Economic Co-operation and Development, or OECD, report comes from a multi-year, 12-nation study coordinated by the OECD Programme on Institutional Management of Higher Education. The report is in response to the demand by national and regional governments for more responsive and active higher education institutions.

The UA Office of Outreach and Global Initiatives, the UA Office of Western Hemispheric Programs, CONAHEC and the UA College of Education sponsored the OECD presentation in Tucson.

Southern Arizona was part of the second phase of the OECD study that ran from 2008-11. The review was performed during the time when tertiary education in Arizona was at a crossroads because of decreasing state funding and its public-good mission was under threat because of the financial cuts.

“There is a recognition in the region that it doesn’t hurt to have an external view of what is going on here in comparison to other regions of the world,” said Francisco Marmolejo, the UA vice president for Western Hemispheric Programs. “And this way we can mobilize our region to become a much more active player in the knowledge-based economy.”

Much of the publication comes from a self study led by a technical team from the UA.

“The unique thing about our region in comparison to other regions of the world is that the study was done by (UA) graduate and undergraduate students, guided by faculty members. The role of the University was to put together a steering committee composed by representatives of the business sector, community based organizations, government and other higher education schools in the region,” Marmalejo said.

It calls for “partnership building in regions by drawing together higher education institutions and public and private agencies to identify strategic goals and work together towards them.” 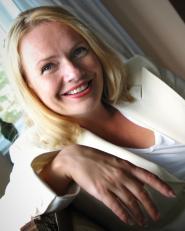 OECD was created in 1961 in part to help continue with the reconstruction of Europe begun under the post-WWII Marshall Plan but has since taken on the task of helping build stronger economies “by assembling expertise and providing analysis and insight not only on policy areas within its 34 member countries, but also about how policy areas interact with one another, even across countries and regions.”

“We had already reviewed 14 different regions (in the first round of studies) and we already could see gaps in important geographical regions. U.S. was not then involved,” said Jaana Puukka, an analyst with OECD who led the Southern Arizona study.

“We did a lot of work to engage a state or region in the U.S., and we were grateful that Southern Arizona joined in, and one important reason for that was Francisco was working for OECD while on sabbatical from UA.”

In each review, regional stakeholders were assembled and produced a self-assessment on the relationship among the work of higher education institutions and regional social, cultural and economic development. The self-assessment was followed by a visit from an international group of OECD-based experts to provide perspective, which then led to the report.

One finding from the report was identifying a major challenge for Southern Arizona: expanding the economic base in order to move to a high-wage, knowledge-based economy. “For this to happen, a more inclusive and effective human capital development and innovation system needs to be developed against a backdrop of growing demands and constantly decreasing state public expenditure on education,” according to the report.

It shows that per-student expenditure in Arizona is considerably lower than the national average for the last number of years. The state also lags behind the U.S. average in educational attainment – 31.8 percent of adults aged 25-34 in Southern Arizona have an associate’s or higher degree, lower than the national average of 40.39 percent – and cites disparities in educational attainment between racial and ethnic groups.

The report said overcoming quality and equity gaps in education is not the direct responsibility of the tertiary education institutions, but instead that of the Arizona Legislature, which needs “to mobilize sustainable funding and the school authorities to work towards improving the quality of education.”

However, colleges and universities “can and should do more to improve access and success in education. There is a need for a region-wide, long-term, public-private collaboration underpinned with sustainable funding. Widening access is also about making sure that students from disadvantaged backgrounds do not face additional barriers to succeed in education. Tertiary education institutions should do more to improve graduation rates and help graduate retention in the region through closer industry collaboration.”

Current programs that help move students to the UA from Pima Community College was held up as a successful model.

Another significant factor holding Southern Arizona back is, according to the report, limited development of a region-wide innovation system. What does exist is underdeveloped and mostly centered in Tucson, with limited connections between the UA and community colleges, whose role is vital in developing the skills of the local population.

The OECD report praised the UA’s interdisciplinary approach to education, and the linkages between the UA and the community colleges and private institutions and their ability to match training with the needs of businesses.

But it also suggested that, despite the current economic slump, local school authorities should work together to address existing academic and equity gaps and mobilize appropriate levels of financial resources to improve the quality of high school graduates. And colleges and universities, as well, also need to ramp up their outreach efforts and develop a common course numbering system for the entire state similar to the system used in Florida.

The UA has already taken steps to address these challenges by adopting a new model to increase enrollment from 38,000 to 52,000 by 2020 while at the same time reducing per-student program costs. That will include focusing on a narrow number of high-value, high-demand degrees and investing in those programs to ensure that the UA will increase enrolment in its distributed programs by 10,000 students before 2020.

The UA also will increasingly rely on community colleges across the state both to increase the rate of successful transfers between those colleges and the UA, and to significantly reduce the total cost-to-student for the undergraduate experience.

The next step will depend on how the report is viewed in the community. Puukka said it all depends on the city or region and how ready they are to take up the recommendations. She cited a region in Spain policy makers changed their minds over a key issue in their study.

“We told them one area you need to focus on is immigration. They said this was an issue for schools, not a problem for us and we’re not interested.

“We prepared our reports and (immigration) was one of our key issues. We provided all of the data, and when we came back after they had received the report, they already were working on this. So we changed their mindset,” she said.

Said Marmolejo: “The release of the report provides an opportunity for all of the major stakeholders in Southern Arizona to reflect on it and see what recommendations may be relevant to us, and to see if we, as a region, are interested and willing to move up in taking into consideration some of those recommendations.”