To tally the energy consumption of a city, the usual method is to add up all the energy used by residents—when they drive their car or turn on the air-conditioning—plus all the energy consumed by commercial buildings and industries in their day-to-day operations. But how should one account for the energy that went into building the office park where people work or paving the roads that people drive? And what about the energy required to make the clothes they are wearing?

Scientists at Lawrence Berkeley National Laboratory have created a new energy model for Chinese cities that takes such factors into account. “This model turns the way you look at energy consumption in a city around,” says David Fridley, a scientist in Berkeley Lab’s China Energy Group who helped put the model together. “The point is not to give an accurate accounting of all the energy consumed in a city, but to look at where are the energy consequences of having people in a city.”

Berkeley Lab scientists presented the model—and their findings for the test case of Suzhou, a relatively wealthy city in eastern China—at a workshop in Beijing this summer sponsored by the Institute for Sustainable Communities. As China, which recently surpassed the United States to become the world’s largest emitter of greenhouse gases, looks for ways to reduce carbon dioxide emissions, this Urban Form Rapid Assessment Model (Urban-RAM) could be a useful tool for city planners. China is undergoing unprecedented rates of urbanization; as hundreds of millions of rural-dwellers move to the cities over the next 40 years or more, China will be building new homes, roads and infrastructure to accommodate them. 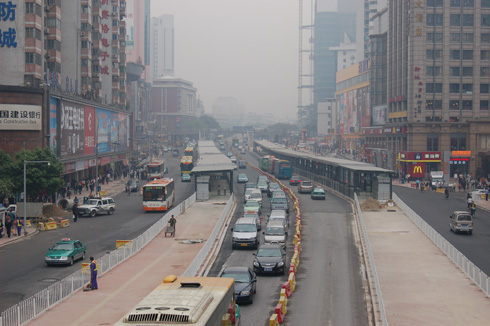 About the image: Berkeley Lab scientists have taken a lifecycle approach to calculate the energy consumed in Chinese cities. Image credit: Institute for Sustainable Communities

“There’s big interest in planning for low-carbon cities. But what does the concept of a ‘low-carbon city’ really mean? If we look at the so-called carbon footprint of a city, the energy used in buildings and transportation has an impact. These are things we can measure pretty readily,” says Berkeley Lab scientist Eric Masanet. “But if we think about the total impact of any urban area, there’s also energy use and carbon emissions involved in constructing and maintaining it, and in producing the myriad goods and services that are consumed on a daily basis by its residents and businesses. Those impacts are referred to as embodied energy and carbon.”

Masanet is an expert in lifecycle assessment, which analyzes a given product’s or service’s full environmental impact, including the energy and emissions associated with its manufacture , transport, use, and ultimate disposal. A lifecycle assessment is at the heart of the Urban-RAM; while such an approach has been used to assess the carbon footprint of U.S. households, this is the first time it has been used for Chinese cities.

In the case of Suzhou, the model revealed some useful findings. One of the most important is that the energy intensity of building materials in China is much higher than in the United States. Part of the problem is that Chinese buildings last on average only 30 years while the lifetime of buildings in the U.S. is 50 to 80 years.

“So even though they may have smaller buildings or a smaller amount of space per person, that doesn’t mean less embodied energy per person,” notes Fridley. “This model argues, for example that China should work really hard through zoning or design requirements or supervision to improve the life of their buildings and the quality of the materials. It also argues, if you look at the embodied energy of the materials themselves, that savings can be had if they use a less carbon-intensive cement.”

Another finding was that about one-quarter of the energy and emissions of Suzhou were due to direct energy consumption, such as driving cars, running public transportation and lighting buildings. The remaining three-quarters were embodied in the infrastructure (including the energy-intensive buildings) and goods and services. Of that, nearly half was embodied in the food people ate and another one-fifth in their clothes. By comparison, the carbon footprint of U.S. households is more evenly split: about one-third from private transportation, one-third from utilities used at home and one-third embodied in goods and services.

“At first it was striking to see that the embodied portions accounted for so much of the total energy and carbon footprints,” says Masanet, “But look at the whole country—the China Energy Group has estimated that about two-thirds of all of China’s emissions come from the industrial sector. Because the Urban-RAM assigns embodied emissions to where goods and services are ultimately consumed, rather than where they’re produced, the high embodied emissions of Suzhou are essentially their share of the country’s industrial impacts.”

For example, using the Urban-RAM, the emissions from the steel mill in Suzhou, one of the 10 largest in China, would be assigned not to Suzhou but to where the steel is consumed. “Looking at the traditional energy balance of Suzhou, it would be dominated by this huge industry, and you’d say, ‘what we need to do to Suzhou is make iron and steel more efficient,’” Fridley says. “That’s good, but if you’re talking about a low-carbon city, the whole point of a city is the people. What are the people responsible for?”

This type of approach to energy analysis is gaining currency as it assigns emissions to the end consumer. “Ultimately the consumer drives the entire economy,” Masanet says. “One of the most effective levers that consumers, governments, and large businesses have are green purchasing decisions and policies. The marketplace can be shifted pretty quickly if big groups of buyers are suddenly demanding the lowest embodied carbon products.”

The Urban-RAM could be a welcome tool in China, where increasingly, local officials are being held accountable not only for economic growth but also environmental improvements, the so-called “green GDP.”

The reaction of Chinese participants at the summer conference was largely positive. “I think it was an eye opener for them to see that the embodied emissions associated with this Chinese city are so high,” Masanet says. “With this tool, one can evaluate broad changes in urban planning and consumption practices, such as the tradeoffs between more residents purchasing and operating private vehicles and meeting those transportation needs through investments in public transportation modes.”

The China Energy Group of Berkeley Lab has been working for more than 20 years on analyzing and promoting energy efficiency in China. The Group’s scientists have participated in the development of appliance standards and labeling in China, China’s first national building energy standard for public buildings and a benchmarking tool for cement and other industries to identify and implement energy-efficiency options.