Sequencing the barley genome will sow many benefits

Some 10,000 years ago, people found they didn’t have to live as nomads, hunting and gathering all their food. In the Fertile Crescent, they started planting crops.

The Fertile Crescent extended from the Nile Valley and along the eastern Mediterranean Coast, through the Tigris and Euphrates valleys of Mesopotamia and down to the Persian Gulf. There, the foundation crops of the Western World were first domesticated.

Food security was a real problem back then, but complacency is just as out of place today. With world population 7 billion, climate change inevitable, and diseases spreading across continents, the planet needs all the crop quality and diversity it can get.

Now one of those foundation crops—barley—is getting a boost from University of Minnesota researcher Gary Muehlbauer. Along with a large international team of colleagues, he has produced a “draft” sequence of the barley genome and published it in the journal Nature. 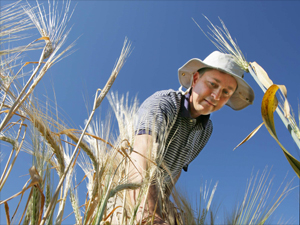 “This gives us the opportunity to isolate most genes we’re interested in, identify their functions, and do targeted breeding,” says Muehlbauer, a professor in the Department of Agronomy and Plant Genetics and head of the Department of Plant Biology. “It increases our ability to select for useful traits such as drought and heat tolerance and disease resistance.”

Barley is used in brewing beer and malting scotch, and for animal feed. It also has potential as a rotation crop that can interrupt cycles of pests afflicting other crops.

Twenty years ago, Minnesota had about a million acres in barley, according to Muehlbauer. Then in 1993, along came a fungus called Fusarium, which caused head blight and spent the next four years wiping out 90 percent of the crop.

“By 2000 there was almost no barley in the state,” says Muehlbauer. “There are only about 100,000 acres in barley, and we don’t have enough resistance to convince the growers, malters, and brewers that barley in Minnesota is a good thing. Most of our barley production comes from Montana, North Dakota, and Idaho, which are drier and not good for blight.”

Muehlbauer has been working on the barley genome project since 1998. Now, with a basic sequence in hand, scientists can use it to find genes, and different forms of genes, that confer desirable traits.

“We can sequence every form of every gene from barley from around the world and assess whether a given form of a gene affects a trait we’re interested in,” Muehlbauer says. “This work will help us understand the roles of genes with respect to traits like yield, the efficiency of water and nitrogen use, disease and pest resistance, and food or malting quality.”

That’s a far cry from when barley—and the human race—were being domesticated. Farmers couldn’t pick genes; they could only pick plants with desirable traits.

But the genome work still has a long way to go. For one thing, the barley genome is about twice the size of the human genome, so there’s plenty of raw material to work on. And its chromosomes have long stretches between the known genes, so figuring out the functions of the DNA in those stretches is a fruitful area for future research.

“We work on barley because it’s a good genetic model for plant sciences, and because malting and brewing companies rely on the crop,” says Muehlbauer. “[Building on this work,] young people … will be able to sequence any plant and exploit the knowledge for breeding purposes or for doing interesting genetics or biology.

“Better beer may even come out of this.”