Pancreatic cancer is highly lethal and difficult to detect early. In a new study, researchers report that people who had high levels of antibodies for an infectious oral bacterium turned out to have double the risk for developing the cancer. High antibody levels for harmless oral bacteria, meanwhile, predicted a reduced pancreatic cancer risk.

PROVIDENCE, R.I. [Brown University] — A new study finds significant associations between antibodies for multiple oral bacteria and the risk of pancreatic cancer, adding support for the emerging idea that the ostensibly distant medical conditions are related.

The study of blood samples from more than 800 European adults, published in the journal Gut, found that high antibody levels for one of the more infectious periodontal bacterium strains of Porphyromonas gingivalis were associated with a two-fold risk for pancreatic cancer. Meanwhile, study subjects with high levels of antibodies for some kinds of harmless “commensal” oral bacteria were associated with a 45-percent lower risk of pancreatic cancer.

“The relative increase in risk from smoking is not much bigger than two,” said Brown University epidemiologist Dominique Michaud, the paper’s corresponding author. “If this is a real effect size of two, then potential impact of this finding is really significant.”

Pancreatic cancer, which is difficult to detect and kills most patients within six months of diagnosis, is responsible for 40,000 deaths a year in the United States. 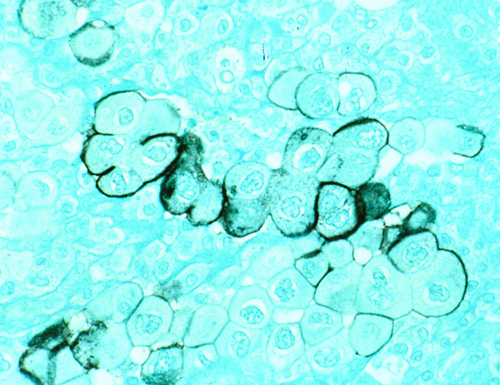 “This is not an established risk factor,” said Michaud, who is also co-lead author with Jacques Izard, of the Forsyth Institute and Harvard University. “But I feel more confident that there is something going on. It’s something we need to understand better.”

To conduct their research, Michaud and Izard drew on medical records and preserved blood samples collected by the Imperial College-led European Prospective Investigation into Cancer and Nutrition Study, a massive dataset of more than 500,000 adults in 10 countries. Detailed health histories and blood samples are available from more than 380,000 of the participants.

The researchers blinded themselves to which samples came from cancer patients and which didn’t during their analysis of the blood, which consisted of measuring antibody concentrations for 25 pathogenic and commensal oral bacteria. In their study design and analysis they controlled for smoking, diabetes, body mass index, and other risk factors.

An important element of the study design was that date of the blood samples preceded the diagnosis of pancreatic cancer by as much as a decade, meaning that the significant difference in antibody levels were likely not a result of cancer.

Instead, the underlying mechanisms that link Porphyromonas gingivalis to pancreatic cancer could be causal, Michaud said, although much more research is needed to understand this association.

Meanwhile, the researchers speculate, the association of high levels of antibodies for commensal bacteria and pancreatic cancer, may indicate an innate, highly active immune response that is protective against cancer.

“Genetic determinants of immune surveillance clearly play a critical role in pancreatic cancer development,” the authors wrote. “Consequently, it is plausible that elevated levels of antibodies to oral bacteria in individuals serve as a marker for a genetically stronger immune response, providing protection against carcinogenesis.”

Michaud, who studies cancer risk factors generally, continues to investigate the association between oral bacteria and pancreatic cancer in collaboration with Izard.

The National Cancer Institute was the primary funder of the study.