Members of the public were treated to a surprise close-encounter with the Grey long-eared bat, believed to be one of only 1,000 individuals in the country, at an event organised by East Devon District Council’s Countryside Service at the Axe Estuary Wetlands.

The bat evening was part of a regular Wet and Wild Weekend – a celebration of the wildlife of the Axe Estuary Wetlands attracting nearly 500 people. Dr Mathews and fellow bat-enthusiast Adrian Bayley had set up mist nets so that people could meet some of the animals they were hearing on bat detectors, and were amazed to find the country’s rarest bat.

There are only six known breeding colonies of Grey long-eared bats in the UK. This discovery potentially links an isolated group near Newton Abbot with colonies in Dorset and the Isle of Wight. 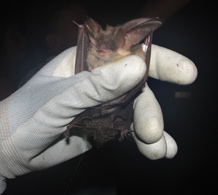 Dr Fiona Mathews of Biosciences at the University of Exeter said “I immediately suspected that this was a Grey long-eared bat, and to share the excitement with so many people at a public event was fantastic. Because it looks rather similar to its common cousin, the Brown long-eared, we had to get genetic confirmation that it really was the rare species. I have found small numbers of these bats before a few miles away, but this find of a recently-lactating animal shows us that the bats are breeding here. With funding from the East Devon Area of Outstanding Natural Beauty Partnership, I was able to radio-tag the bat and find her roost.”

Dr Mathews is now following the bat’s movements and has found it foraging for moths over the wetlands and in the pastures around Colyford, north of Seaton.

East Devon District Council’s Axe Estuary Wetlands Officer, Fraser Rush said: “We have long known that our Axe Estuary Wetlands Nature Reserve was important for bats, with nine species recorded to date. In recent years we have worked hard to provide better opportunities for these increasingly threatened animals with many new bat boxes, purpose-built bat roosting areas in new buildings and improvements to habitat management. To find such a rarity as the Grey long-eared bat is a fantastic and unexpected reward for all our efforts”.

Grey long-eared bats feed largely on moths which they find using their enormous ears. To avoid frightening away the moths, many of which also have good hearing, they produce only very quiet ultrasound. These ‘whispering’ bats are therefore very difficult to find using bat detectors. Because they do not fly far, the bats depend on having good moth populations close to their roost, particularly when they have babies. Unfortunately many suitable feeding areas are being lost due to urbanisation and changes in farming methods.

Dr Mathews added: “We think that light pollution could be a key threat to many rare bats, including Grey long-eareds. This affects the behaviour of both bats and moths, and possibly cuts bats off from their feeding areas”. Dr Mathews and University of Exeter colleagues are now researching these impacts.