Backpacks, Not the Bombs Inside, Key to Finding DNA

EAST LANSING, Mich. — Catching terrorists who detonate bombs may be easier by testing the containers that hide the bombs rather than the actual explosives, according to pioneering research led by Michigan State University.

Currently, law enforcement labs tend to test for DNA on the exploded bomb fragments – but this has a low success rate, said David Foran, an MSU forensic biologist and lead investigator on the research project.

Through the MSU-led study, researchers obtained DNA from eight backpacks that had been blown up with pipe bombs inside, and subsequently obtained full DNA profiles that matched all eight volunteers who had carried the backpacks for a week. 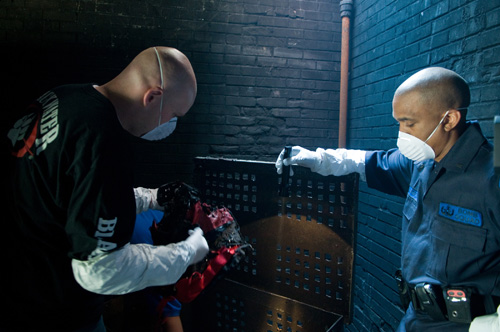 MSU's Scott Grammer, left, and Shawn Stallworth from the Michigan State Police inspect a backpack after a pipe bomb was detonated inside during a 2008 experiment. The findings are published in a 2011 article. Photo by G.L. Kohuth

The findings, which appear in the Journal of Forensic Sciences, could ultimately change the way law enforcement officials investigate bombings, Foran said.

Foran noted that homemade bombs, or improvised explosive devices, have become the weapon of choice for terrorists and insurgents around the world. In the United States, IEDs were used in the Oklahoma City bombing in 1995 and the Centennial Olympic Park bombing in Atlanta in 1996. 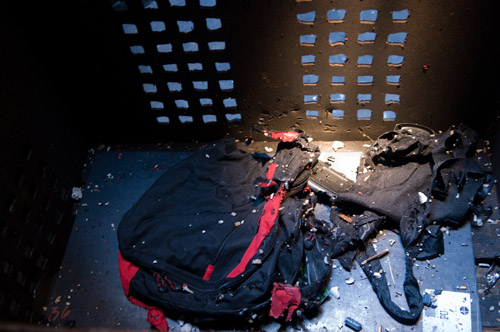 DNA could be obtained from backpacks even after a bomb was detonated inside. Photo by G.L. Kohuth

“This may change the way the investigators look at things,” said Foran, professor of criminal justice. “They may focus on other pieces of evidence if they know they’re much more likely to produce a DNA result.”

Foran said DNA is difficult to find on an exploded pipe bomb, likely because of the heat of the blast and the smooth nature of the pipe.

But DNA showed up on all of the backpacks, possibly because they weren’t as decimated as the bombs and because of their coarser texture, Foran said. 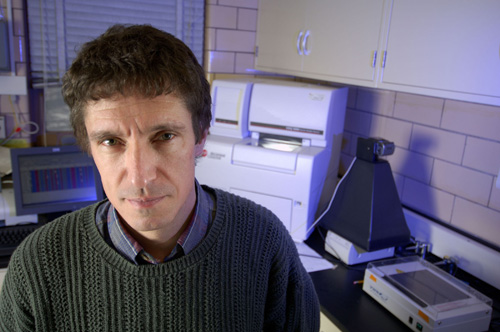 Researchers examined 11 areas on the backpacks, such as the handle, straps and zipper, and from that were able to match the DNA to each of the volunteer handlers. That method, called consensus profiling, helps rule out traces of DNA that may have come from the handlers’ friends or family, Foran said.

MSU researchers carried out the experiment with the Michigan State Police bomb squad at a Lansing Fire Department facility.

Foran’s co-investigators were Shane Hoffmann, a former MSU graduate student now with the FBI, and Shawn Stallworth of the state bomb squad.