New research published today in the journal Science suggests it may be possible to use brain technology to learn to play a piano, reduce mental stress or hit a curve ball with little or no conscious effort. It’s the kind of thing seen in Hollywood’s “Matrix” franchise.

Think of a person watching a computer screen and having his or her brain patterns modified to match those of a high-performing athlete or modified to recuperate from an accident or disease. Though preliminary, researchers say such possibilities may exist in the future.

“Adult early visual areas are sufficiently plastic to cause visual perceptual learning,” said lead author and BU neuroscientist Takeo Watanabe of the part of the brain analyzed in the study. 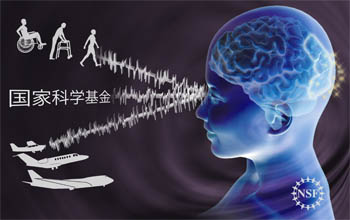 In the future, a person may be able to watch a computer screen and have his or her brain patterns modified to improve physical or mental performance. Researchers say an innovative learning method that uses decoded functional magnetic resonance imaging could modify brain activities to help people recuperate from an accident or disease, learn a new language or even fly a plane. Image credit: Nicolle Rager Fuller, National Science Foundation

Neuroscientists have found that pictures gradually build up inside a person’s brain, appearing first as lines, edges, shapes, colors and motion in early visual areas. The brain then fills in greater detail to make a red ball appear as a red ball, for example.

Researchers studied the early visual areas for their ability to cause improvements in visual performance and learning.

“Some previous research confirmed a correlation between improving visual performance and changes in early visual areas, while other researchers found correlations in higher visual and decision areas,” said Watanabe, director of BU’s Visual Science Laboratory. “However, none of these studies directly addressed the question of whether early visual areas are sufficiently plastic to cause visual perceptual learning.” Until now.

Boston University post-doctoral fellow Kazuhisa Shibata designed and implemented a method using decoded fMRI neurofeedback to induce a particular activation pattern in targeted early visual areas that corresponded to a pattern evoked by a specific visual feature in a brain region of interest. The researchers then tested whether repetitions of the activation pattern caused visual performance improvement on that visual feature.

The result, say researchers, is a novel learning approach sufficient to cause long-lasting improvement in tasks that require visual performance.

What’s more, the approached worked even when test subjects were not aware of what they were learning.

“The most surprising thing in this study is that mere inductions of neural activation patterns corresponding to a specific visual feature led to visual performance improvement on the visual feature, without presenting the feature or subjects’ awareness of what was to be learned,” said Watanabe, who developed the idea for the research project along with Mitsuo Kawato, director of ATR lab and Yuka Sasaki, an assistant in neuroscience at Massachusetts General Hospital.

The finding brings up an inevitable question. Is hypnosis or a type of automated learning a potential outcome of the research?

“In theory, hypnosis or a type of automated learning is a potential outcome,” said Kawato. “However, in this study we confirmed the validity of our method only in visual perceptual learning. So we have to test if the method works in other types of learning in the future. At the same time, we have to be careful so that this method is not used in an unethical way.”

At present, the decoded neurofeedback method might be used for various types of learning, including memory, motor and rehabilitation.

The National Science Foundation, the National Institutes of Health and the Ministry of Education, Culture, Sports, Science and Technology in Japan supported the research.