At Yale, Quantum Computing is a (qu)bit Closer to Reality

Physicists at Yale University have taken another significant step in the development of quantum computing, a new frontier in computing that promises exponentially faster information processing than the most sophisticated computers of today.

In research published online this month in the journal Nature, the Yale physicists demonstrate the most basic form of quantum error correction — a way to compensate for quantum computing’s intrinsic susceptibility to errors. Developing technology to correct these errors on the fly is a necessary step for fully realizing quantum computers.

“Without error correction, you couldn’t make a quantum computer that had an exponential speed-up,” said Matthew Reed, a fifth-year Ph.D. student in physics at Yale who is the paper’s first author. “Small errors would otherwise inexorably build up and cause the computation to fail.”

Quantum computers use quantum bits (“qubits”) to represent information. These qubits can take many forms, such as trapped ions or molecules. At Yale, researchers made their qubits from “artificial” atoms using superconducting circuits. Any qubit must be able to take either of two states, “0” or “1”, or both states simultaneously. For quantum computers to work, they must correctly recognize and interpret these qubit states. But qubits are prone to accidental changes of state —i.e., errors — confounding interpretation. 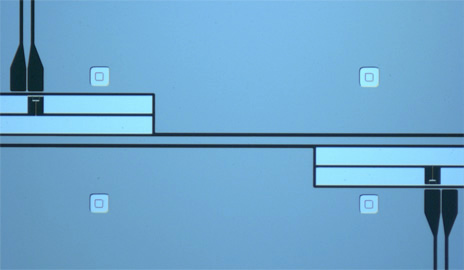 Physicists at Yale University have taken another significant step in the development of quantum computing, a new frontier in computing that promises exponentially faster information processing than the most sophisticated computers of today. Image credit: Yale University

For the first time, the Yale team has demonstrated quantum error correction in a solid-state system, an electronic device analogous to a computer chip. The team developed a technique for identifying a qubit’s original state, detecting changes and reversing them when necessary.

“This result, combined with recent breakthroughs by our lab and others toward making qubits more coherent, shows that superconducting circuits, the system we study here at Yale, may eventually be a platform on which a quantum computer is built,” said Robert Schoelkopf, the leader of the research group.

Yale researchers, including some involved in the most recent advance, previously developed the world’s first rudimentary solid-state quantum processor, a device that looks and feels like a conventional microprocessor.

Other authors of the recent paper are L. DiCarlo of Delft University of Technology in The Netherlands; and S.E Nigg, L. Sun, L. Frunzio and S.M. Girvin, all of Yale University.

Read the research paper in Nature.