In the effort to convert sunlight into electricity, photovoltaic solar cells that use conductive organic polymers for light absorption and conversion have shown great potential. Organic polymers can be produced in high volumes at low cost, resulting in photovoltaic devices that are cheap, lightweight and flexible.

In the last few years, much work has been done to improve the efficiency with which these devices convert sunlight into power, including the development of new materials, device structures and processing techniques.

In a new study, available online this week in the journal Nature Photonics, researchers at the UCLA Henry Samueli School of Engineering and Applied Science and UCLA’s California Nanosystems Institute (CNSI) report that they have significantly enhanced polymer solar cells’ performance by building a device with a new “tandem” structure that combines multiple cells with different absorption bands. The device had a certified power-conversion efficiency of 8.62 percent and set a world record in July 2011.

Further, after the researchers incorporated a new infrared-absorbing polymer material provided by Sumitomo Chemical of Japan into the device, the device’s architecture proved to be widely applicable and the power-conversion efficiency jumped to 10.6 percent — a new record — as certified by the U.S. Department of Energy’s National Renewable Energy Laboratory. 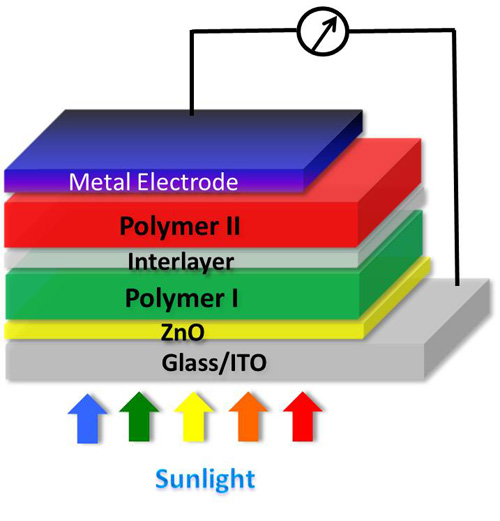 By using cells with different absorption bands, tandem solar cells provide an effective way to harvest a broader spectrum of solar radiation. However, the efficiency doesn’t automatically increase by simply combining two cells. The materials for the tandem cells have to be compatible with each other for efficient light harvesting, the researchers said.

Until now, the performance of tandem devices lagged behind single-layer solar cells, mainly due to this lack of suitable polymer materials. UCLA Engineering researchers have demonstrated highly efficient single-layer and tandem polymer solar cells featuring a low-band-gap–conjugated polymer specially designed for the tandem structure. The band gap determines the portion of the solar spectrum a polymer absorbs. 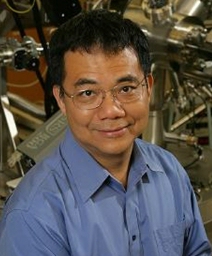 “Envision a double-decker bus,” said Yang Yang, a professor of materials science and engineering at UCLA Engineering and principal investigator on the research. “The bus can carry a certain number of passengers on one deck, but if you were to add a second deck, you could hold many more people for the same amount of space. That’s what we’ve done here with the tandem polymer solar cell.”

To use solar radiation more effectively, Yang’s team stacked, in series, multiple photoactive layers with complementary absorption spectra to construct a tandem polymer solar cell. Their tandem structure consists of a front cell with a larger (or high) band gap material and a rear cell with a smaller (or low) band gap polymer, connected by a designed interlayer.

When compared to a single-layer device, the tandem device is more efficient in utilizing solar energy, particularly by minimizing other energy losses. By using more than one absorption material, each capturing a different part of the solar spectrum, the tandem cell is able to maintain the current and increase the output voltage. These factors enable the increase in efficiency, the researchers said.

“The solar spectra is very broad and covers the visible as well as the invisible, the infrared and the UV,” said Shuji Doi, research group manager for Sumitomo Chemical. “We are very excited that Sumitomo’s low–band gap polymer has contributed to the new record efficiency.”

“We have been doing research in tandem solar cells for a much shorter length of time than in the single-junction devices,” said Gang Li, a member of the research faculty at UCLA Engineering and a co-author of the Nature Photonics paper. “For us to achieve such success in improving the efficiency in this short time period truly demonstrates the great potential of tandem solar cell technology.”

“Everything is done by a very low-cost wet-coating process,” Yang said. “As this process is compatible with current manufacturing, I anticipate this technology will become commercially viable in the near future.”

This study opens up a new direction for polymer chemists to pursue designs of new materials for tandem polymer solar cells. Furthermore, it indicates an important step towards the commercialization of polymer solar cells. Yang said his team hopes to reach 15 percent efficiency in the next few years.

The study was supported by the National Science Foundation, the U.S Air Force Office of Scientific Research, the U.S. Office of Naval Research and the U.S. Department of Energy, together with the National Renewable Energy Laboratory.

Sumitomo Chemical is one of Japan’s leading chemical companies, offering a diverse range of products globally in the fields of basic chemicals, petro-chemicals, IT-related chemicals and materials, agricultural chemicals, and pharmaceuticals. The company’s consolidated net sales for fiscal year 2010 were $23.8 billion.