*Based on next generation IBM Blue Gene, the 10 petaflop “Mira” supercomputer will fuel national innovation*

The 10-petaflop IBM Blue Gene/Q supercomputer, named “Mira”, will be operational in 2012 and made available to scientists from industry, academia and government research facilities around the world.

“Computation and supercomputing are critical to solving some of our greatest scientific challenges, like advancing clean energy and understanding the Earth’s climate,” said Rick Stevens, associate laboratory director for computing, environment and life sciences at Argonne National Laboratory.  “Argonne’s new IBM supercomputer will help address the critical demand for complex modeling and simulation capabilities, which are essential to improving our economic prosperity and global competitiveness.” 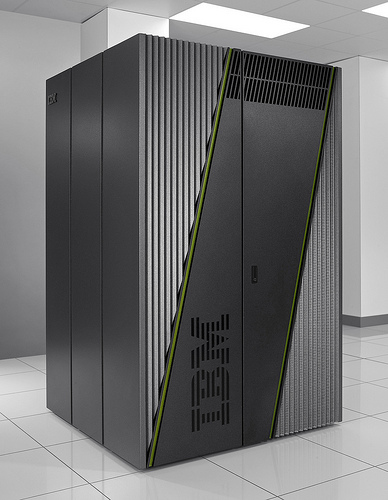 Argonne National Laboratory will use IBM's next-generation Blue Gene/Q supercomputer to stoke economic growth and improve U.S. competitiveness for such challenges as designing electric car batteries, understanding climate change and exploring the evolution of the universe. The 10 petaflop system, named "Mira", will be twice as fast as today's fastest supercomputer, providing a strong science and technology engine that will fuel national innovation. Argonne is one of the U.S. Department of Energy's oldest and largest labs for science and engineering research, located some 20 minutes outside Chicago, IL. (Feature Photo Service)

The Argonne Leadership Computing Facility (ALCF) is already working with potential users as part of the “Early Science Program,” a program designed to get researchers working on the most effective ways to leverage the computer’s power as soon as it is installed.

Argonne and DOE have selected 16 projects from a pool of proposals, in a wide variety of disciplines that will be the first to gain access to Mira’s capabilities. These span a diverse range of projects from reducing energy inefficiencies in transportation and developing advanced engine designs to spurring advances in energy technologies. The progress made during the Early Science Program should enable researchers to quickly leverage Mira’s computational capability to reach their science goals soon after it is deployed.

Argonne anticipates that the new supercomputer will be one of the fastest and most energy efficient supercomputers in the world after its construction and installation are complete thanks to a combination of innovative new chip designs and extremely efficient water cooling. Last year, the ALCF won an Environmental Sustainability (EStar) award for the innovative energy efficient cooling it designed for its current system, and Argonne researchers anticipate that Mira will be significantly more power friendly.

Argonne also envisions Mira as a stepping stone to exascale-class computers that will be faster than petascale-class computers by a factor of a thousand. Exascale computing has the potential to address a class of highly complex workloads that have been beyond our reach, not just due to their sheer size, but because of their inherent uncertainties and unpredictability — challenges like understanding the impacts of regional climate change and the design of safe nuclear reactors.

Mira will offer an opportunity for scientists to become more familiar with the capabilities an exascale machine will offer and the programming changes it will require. For example, scientists will have to scale their current computer codes to more than 750,000 individual computing cores, providing them preliminary experience on how scalability might be achieved on an exascale-class system with 100s of millions of cores.

Once Mira is online, the DOE’s Innovative and Novel Computational Impact on Theory and Experiment (INCITE) and the ASCR Leadership Computing Challenge (ALCC) programs will award blocks of computing time via a peer-reviewed, competitive process to researchers who are working on scientific challenges that are best addressed by the capabilities of high-performance supercomputers.

Blue Gene is one of 100 Icons of Progress in IBM’s 100 year history because it is a radical departure from the supercomputers of its time, consuming only a fraction of the energy and floor space. The system is part of a collaboration between Argonne, IBM and Lawrence Livermore National Laboratory. Blue Gene’s speed and expandability have enabled industry and the scientific community to address a wide range of complex problems and make more informed decisions.