An international team of scientists has identified large-scale genetic changes that marked the evolution of pregnancy in mammals.

They found thousands of genes that evolved to be expressed in the uterus in early mammals, including many that are important for maternal-fetal communication and suppression of the immune system. Surprisingly, these genes appear to have been recruited and repurposed from other tissue types by transposons—ancient mobile genetic elements sometimes thought of as genomic parasites.

The study, published online in Cell Reports on Jan. 29, sheds light on how organisms evolve new morphological structures and functions. 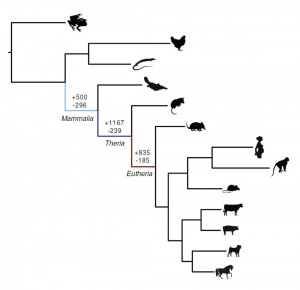 “For the first time, we have a good understanding of how something completely novel evolves in nature, of how this new way of reproducing came to be,” said study author Vincent Lynch, assistant professor of human genetics at the University of Chicago. “Most remarkably, we found the genetic changes that likely underlie the evolution of pregnancy are linked to domesticated transposable elements that invaded the genome in early mammals. So I guess we owe the evolution of pregnancy to what are effectively genomic parasites.”

To study genetic changes during the evolution of pregnancy in mammals, Lynch and his colleagues used high-throughput sequencing to catalog genes expressed in the uterus of several types of living animals—placental mammals (a human, monkey, mouse, dog, cow, pig, horse and armadillo), a marsupial (opossum), an egg-laying mammal (platypus), a bird, a reptile and a frog. Then they used computational and evolutionary methods to reconstruct which genes were expressed in ancestral mammals.

The researchers found that as the first mammals evolved—and resources for fetal development began to come more from the mother and less from a yolk—hundreds of genes that are important for cellular signaling, metabolism and uterine development started to be expressed in the uterus. As the eggshell was lost and live-birth evolved in the common ancestor to marsupials and placental mammals, more than 1,000 genes were turned on, many of which were strongly linked to the establishment of maternal-fetal communication. As prolonged pregnancy evolved in placental mammals, hundreds of genes began to be expressed that greatly strengthened and elaborated maternal-fetal communication, as well locally suppressing the maternal immune system in the uterus—thus protecting the developing fetus.

The team also identified hundreds of genes that were turned off as these lineages evolved, many of which had been involved in egg shell formation.

“We found lots of genes important for maintaining hormone signaling and mediating maternal-fetal communication, which are essential for pregnancy, evolved to be expressed in the uterus in early mammals,” Lynch said. “But immune suppression genes stand out. The fetus is genetically distinct from the mother. If these immune genes weren’t expressed in the uterus, the fetus would be recognized by the mother’s immune system as foreign and attacked like any other parasite.”

In addition to function, Lynch and his colleagues investigated the origin of these genes. They found most already had roles in other organ and tissue systems such as the brain, digestive and circulatory systems. But during the evolution of pregnancy, these genes were recruited to be expressed in the uterus for new purposes. They evolved regulatory elements that allowed them to be activated by progesterone, a hormone critical in reproduction.

The team found that this process was driven by ancient transposons—stretches of non-protein coding DNA that can change their position within the genome. Sometimes called “jumping genes,” transposons are generally thought to be genomic parasites that serve only to replicate themselves. Many of the ancient mammalian transposons possessed progesterone binding sites that regulate this process. By randomly inserting themselves into other places in the genome, transposons appear to have passed on this activation mechanism to nearby genes.

“Genes need some way of knowing when and where to be expressed,” Lynch said. “Transposable elements appear to have brought this information, allowing old genes to be expressed in a new location, the uterus, during pregnancy. Mammals very likely have a progesterone-responsive uterus because of these transposons.”

Lynch and his colleagues note their findings represent a novel explanation for how entirely new biological structures and functions arise. Rather than genes gradually evolving uterine expression one at a time, transposable elements coordinated large-scale, genome-wide changes that allowed numerous genes to be activated by the same signal—in this case, progesterone, which helped drive the evolution of pregnancy.

“It’s easy to imagine how evolution can modify an existing thing, but how new things like pregnancy evolve has been much harder to understand,” Lynch said. “We now have a new mechanistic explanation of this process that we’ve never had before.”