Clues about rainfall in the distant past — from river mud to tiny seashells — come to rest on the ocean floor. Sampling layers of sediment from the Indian Ocean will help researchers build an accurate picture of Indian monsoon activity going back 15 million years or more.

PROVIDENCE, R.I. [Brown University] — When the research vessel JOIDES Resolution returned to port in late January after a two-month cruise, it had harvested more than 550 sediment cores from deep beneath the Indian Ocean. Locked within those tubes of muck is a record of monsoon rainfall dating back millions of years. Brown geologist Steven Clemens, co-chief scientist on the expedition, says this glimpse of monsoons past could help scientists predict what may become of the rains in the future.

“One of the reasons we exist in the paleoclimate community is to try to reconstruct with some degree of accuracy how climates have changed through time,” Clemens said. “What we find can be used as targets for the numerical models used to predict future climate change.”

Time machine. The 470-foot JOIDES Resolution has a 200-foot drilling tower that can drill several kilometers into the seafloor. The sediment cores it is harvesting will help create a 15-million-year record of monsoons, perhaps the single most powerful expression of Earth’s hydroclimate. Image credit. Brown University

Accurately predicting how climate change might affect the Indian monsoons is crucial. They are the lifeblood of the Indian subcontinent. More than half of the billion-plus people in the region make a living in agriculture. Summer monsoons bring as much as 80 percent of the region’s annual rainfall, making them the backbone of the Indian economy, essential for successful crops.

“The amount of rainfall is stunning,” Clemens said. “There are places that get on the order of several meters of rain each summer.” The monsoons are, he says, arguably the single most powerful expression of Earth’s hydroclimate.

The huge influx of fresh water from the monsoons is enough to alter the salinity of the Bay of Bengal in the northern Indian Ocean. Rain and runoff create a layer of dilute seawater in the bay that rides atop the denser, more saline water below. The surface water is a habitat for microorganisms called planktonic foraminifera. The fossils left behind by those creatures will help Clemens and his colleagues reconstruct monsoon activity. 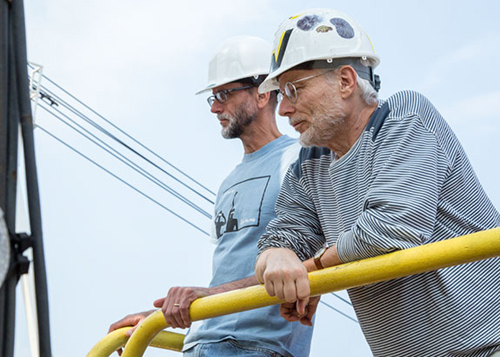 Buildling a record of climate change on a geological time scale. Steve Clemens of Brown University and Wolfgang Kuhnt of Christian-Albrechts-University are co-chief scientists for the expedition to the Indian Ocean. Image credit. Brown University

The foraminifera use nutrients in the water to construct their tiny shells. When the creatures die, the shells sink to the bottom and become trapped in sediment. By taking core samples of sediment and analyzing the oxygen isotopes in those fossils, scientists can divine the salinity of the water in which the creatures lived. That salinity signal can be used as an indicator of changing rainfall amounts over time.

Other data from the cores complement the foraminifera data. River runoff into the bay brings sediment from the continent with it. The amount of continental material found in the ocean sediments is an indicator of rain intensity. Plant matter washed into the ocean and buried in sediment offers another rainfall signal. The hydrogen isotopic composition of waxes on plant leaves varies in different rainfall environments, and that signature can be detected in sediment cores. Geologist Yongsong Huang, also at Brown, will be examining this aspect of the sediments.

Clemens and his colleagues are hopeful that all these proxies, measured in sediment of different ages, can give them a fairly detailed picture of monsoon activity over the last 15 million years or so. The rainfall amounts through time can be compared to known variations in factors that influence global climate — greenhouse gas levels, variations in Earth’s orbit, and volumes of glacial ice. That enables researchers to correlate those factors with changes in the monsoons.

“We want to look at how rainfall varied as these conditions changed,” Clemens said. “Is it more sensitive to CO2, or to changes in the ice sheets, or to solar radiation? That’s what we’re hoping to find out.” 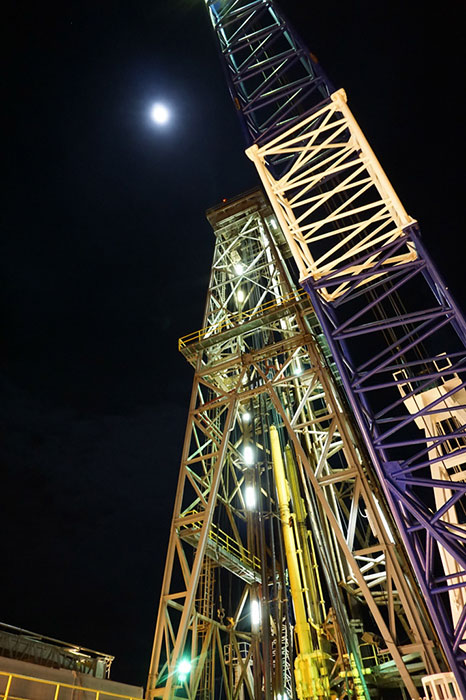 Twenty-four by seven. Drilling down through millions of years of seafloor sediment is a relentless proposition. Image credit. Brown University

To gather the sediment cores, Clemens and the crew of the JOIDES Resolution (JOIDES is an acronym for Joint Oceanographic Institutions for Deep Earth Sampling) set sail from Singapore late last November. The ship and crew traveled about 4,000 nautical miles over two months, collecting cores from six locations in and around the Bay of Bengal. The expedition was an international effort, funded in part by the U.S. National Science Foundation.

The Resolution, a converted oil-drilling vessel, is crewed by 100 people, with an additional 30 or so scientists aboard. The ship is 470 feet long with a 200-foot drilling tower on the deck. It’s capable of operating in water eight kilometers deep, and can drill holes to a depth of a several kilometers. The cores are brought on board in 9.5-meter intervals — one coming up about every 30 to 60 minutes when drilling is underway. Once the cores are hoisted up from the depths, the scientists go to work. The Resolution has impressive laboratory facilities, Clemens said, and quite a bit of preliminary analyses can be done at sea.

However, the bulk of the analysis on the cores lies ahead. Over the next few years, scientist will begin analyzing samples in labs all over the world including here at Brown. The science team will meet in 2017 to present the findings and consider where to publish them.

“Planning for this project started about three years ago, and it will end probably three years from now. So it’s about a six-year endeavor,” Clemens said.

It’s a reasonable investment, Clemens says, in order to gain a better understanding of one of the most critical climatic regions on Earth.