GAINESVILLE, Fla. — By analyzing the genes of bacteria, University of Florida researchers have moved a step closer to pinpointing how two brain disorders common in small-breed dogs occur.

The researchers found that the bacteria, known as Mycoplasma canis, invade dog’s cells and suppress their immune system responses.

“This could explain how the bacteria are able to enter the brain in certain circumstances,” said lead investigator Daniel Brown, an associate professor of infectious diseases at the UF College of Veterinary Medicine. “If our theory is correct, it is possible that antibiotic therapy aimed at the mycoplasma could be beneficial if the condition is diagnosed early enough.”

The findings, which appear in the August issue of the Journal of Bacteriology, were also presented at the annual meeting of the International Organization for Mycoplasmology in France.

The researchers studied two common brain syndromes called granulomatous meningoencephalomyelitis, or GME, and necrotizing meningoencephalitis, or NME, which occur primarily in small toy-breed dogs such as pugs, Malteses, Yorkshire terriers, Chihuahuas and Pomeranians. The diseases affect the central nervous system, causing brain damage and symptoms such as seizures, decreased alertness and difficulty maintaining balance. There is no cure, but drugs can control the brain inflammation by suppressing the immune system.

No clear data exist on how widespread the disorders are.

“Although reliable information on new and existing cases is pretty scarce or nonexistent, inflammatory central nervous system disease is certainly one of the most common problems we deal with as veterinary neurologists,” said Christopher Mariani, D.V.M., Ph.D., an assistant professor of neurology at North Carolina State University’s College of Veterinary Medicine. Mariana was not involved in the UF study. 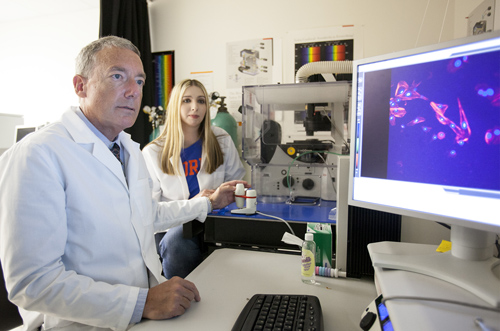 Dan Brown, an associate professor in the department of infectious diseases and pathology, and bioscientist Dina Michaels use a fluorescence microscope to analyze cells of the canine immune system during infection with Mycoplasma canis. Photo by: Maria Farias/University of Florida

The syndromes previously were thought to be caused by a virus or by an attack of the body’s own immune system. But University of Georgia researchers Renee Barber, and Scott Schatzberg, and colleagues, including Brown, reported earlier this year that whereas viruses were absent from the brain tissues of dogs with the diseases, the bacterium Mycoplasma canis was unexpectedly common. Interestingly, the researchers also found traces of the bacteria in some dogs that did not have the disease.

The bacteria would not have been detected by the methods used previously to search for a presumed viral agent.

In the new study, Brown and colleagues examined five strains of Mycoplasma canis isolated from three different parts of the body — the brain, the genital tract and the throat.

What they did find was evidence that the bacteria don’t just sit on the surfaces of cells, but actually penetrate inside cells. That may be what enables entry into the bloodstream and eventually, to the brain, the researchers said.

“This finding is tantalizing, because it may offer an explanation as to why scientists have never been able to specify a viral, autoimmune or other cause of GME and NME,” Brown said.

In addition, different strains of bacteria were not equally efficient at suppressing the dogs’ immune responses.

The researchers are continuing to analyze the effects of bacterial infection on immune system cells known as macrophages to determine how the bacteria could breach the blood-brain barrier. Later, they will extend their studies to examining how the bacteria interact with different types of brain cells.

“The study is intriguing, but more work needs to be completed to determine the significance of these bacteria as a possible cause of GME and NME,” said Karen Vernau, an associate clinical professor and chief of neurology/neurosurgery at the University of California, Davis’ College of Veterinary Medicine, who was not involved in the study.