All for One: What Makes an Individual

Life as we know it has certain properties that are consistent regardless whether you’re looking at a bacterial colony in a petri dish or a primate colony in South America. Rick Michod, UA professor and department head of ecology and evolutionary biology, has received $1.3 million from NASA to investigate what properties of biology define an individual organism.

Many things in life are not fair. But some things are at least consistent.

For example, all life as we know it has certain universal properties, which presumably define how life would be organized anywhere it evolved in the universe, said Richard Michod, professor and head of the department of ecology and evolutionary biology at the University of Arizona.

One such property is the hierarchical system by which life is organized. 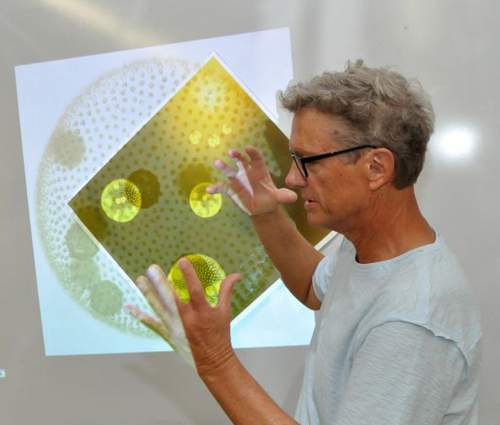 UA professor and department head of ecology and evolutionary biology Richard Michod received $1.3 million from NASA to study properties of life believed to be universal anywhere life could occur. (Photo by Patrick McArdle/UANews)

From the smallest unicellular bacterium drifting through a pond to complex animals and social networks of societies, all life that we know follows a hierarchical system. This hierarchy presumably would be found anywhere life could occur in the universe.

With $1.3 million from NASA, Michod’s lab team, including co-principal investigators Patrick Ferris, a UA research associate, and Pierre Durand, a former postdoctoral researcher in Michod’s lab and now a professor at the University of the Witwatersrand in Johannesburg, South Africa, will endeavor over the next four years to uncover the secrets of this hierarchy.

Their research will focus on the largely microscopic, unassuming volvocine algae. These small organisms are nearly ubiquitous in their homesteading habits, appearing in lakes and streams from Japan to Arizona, and in nutrient-rich soils all over the world. Species of volvocine algae vary from the single-celled go-it-alone variety to multicellular colonies.

“It’s a group of algae that exhibit a vast array of diverse multicellular, single-cellular and colonial forms,” Michod said. 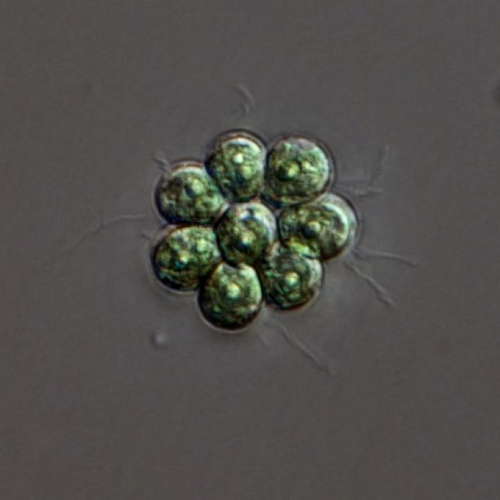 When do many individual cells become part of a larger whole, a multicellular organism? When do the many give up their own fitness for the good of the one? This is one of the research questions currently investigated by UA evolutionary biologist Richard Michod and his lab team. (Photo by Deborah Shelton)

Their ubiquitous nature and the fact that their member species represent steps in the hierarchy of single-celled to multicellular organisms makes Volvocine algae an ideal study system for researchers seeking to understand the genetic steps that take place as life evolves from single-celled organisms to colonies.

“They form simple clumps of two or four cells without any kind of division of labor and without much morphology,” Michod said. “Then there are groups of eight, 16 and 64 cells and they start developing more interesting morphological forms; cells start specializing and giving up their fitness in favor of the group. There’s kind of a continuous ray of steps to multicellularity that you can see in Volvocine algae.”

“We use the grade of biological forms in the algae to imagine how these steps might be,” Michod explained. “Then we look for genes underlying each of the steps and we use molecular biology to try to find the genes and see what they’re doing in the different intermediate forms.”

“We hope to test all these different steps that we’ve theorized exist in the transition from groups to individuals,” Michod said. “There are four or five steps that we think are critical. One is that there has to be ways for groups to form, there have to be mechanisms that keep units together in a structured way. Then you have to have a way of equalizing the fitness of everybody, and then you have to export fitness to the group, the multicellular organism.” 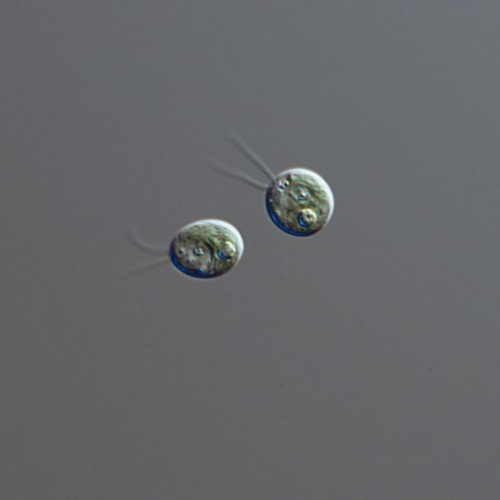 Powered by its two tail-like flagella, the unicellular Chlamydomonas reinhardtii is believed to be similar to the unicellular ancestor of all volvocine algae. (Photo by Deborah Shelton)

For example, Michod said, “the cells in our body don’t exist by themselves anymore, they’re part of a new individual, a multicellular organism. But there weren’t always multicellular organisms,” he added. “Life was unicellular for billions of years, so what are the conditions under which cells relinquish their claim to fitness and devote their life to the larger unit?”

The research problem begs the question of how we define an individual in the first place. In some cases, an individual is defined as indivisible, Michod said.

“You can’t chop up an individual and get smaller individuals; they lose their wholeness,” he said. “Another notion is genetic similarity of the cells, and another is the uniqueness that it is different from other individuals. But the most general notion is that an individual can participate in the evolutionary process and adapt at its level of organization.” 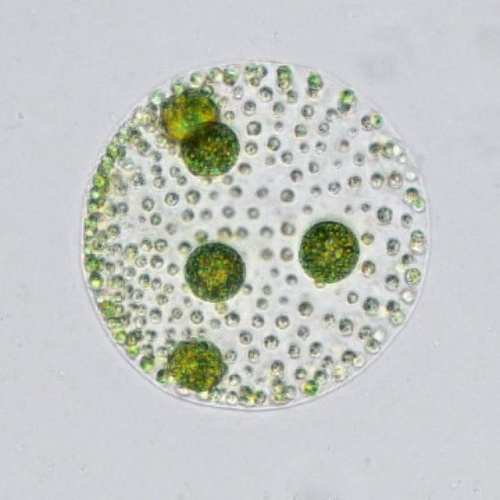 Specifically, Michod’s team is looking at the division between two types of cells that occur in multicellular organisms: germ cells and somatic cells.

Single-celled organisms need to perform both germ and somatic cell functions, whereas cells that exist as part of a multicellular organism don’t need to reproduce themselves – they’re more interested in helping the group survive.

“Basically a somatic cell is turning off reproduction and it’s expressing all its genes in terms of helping the other cells survive,” Michod said. 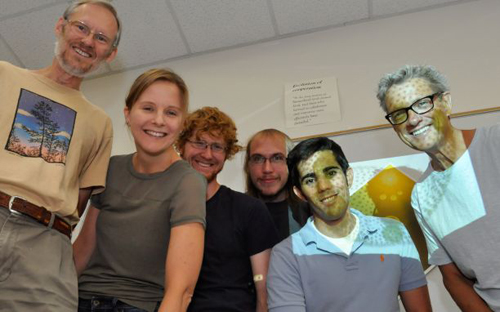 Michod’s lab team is investigating a group of genes called regA-like genes, which are responsible for turning off the reproductive capabilities of single-celled organisms during times of environmental stress, such as a drought, when nourishment may be scarce and the energy expenditure of reproduction would be unwise for survival of the cell.

The team has theorized that these genes may be inherently activated in somatic cells that function as part of a multicellular organism, thus permanently preventing reproduction and enabling all cell processes to focus on benefiting the group.

“We hope by the end of the project to have concrete examples in this group of algae of each of those steps that lead from single-celled organisms to multicellular individuals,” Michod said. “The theory that’s being tested in the algae is a very general theory that applies to any living system. We think the genes will be different, the traits will be different, and if it’s on Mars everything’s going to be different – except, perhaps, for these steps.”