‘Sweet Dreams (Are Made of Chemistry)’

When Eurythmics recorded their hit song “Sweet Dreams (Are Made of This)” in 1983, they somehow neglected to include chemical equations. Thirty years later, UCLA undergraduates Jessica Lee, Emily Chuang and Christine Nguyen have corrected the omission.

Yes, it’s June at UCLA, and that means commencement ceremonies and a new batch of chemistry music videos from students in Neil Garg’s highly popular organic chemistry course, Chemistry 14D, which the L.A. Weekly named one of the “Best of L.A. Classes” last October. 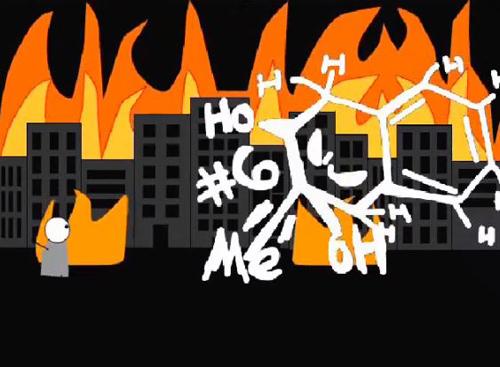 This quarter, 273 students in the course created 98 music videos detailing the various chemical reactions they’ve learned — the highest numbers in the four years Garg has offered the innovative extra-credit assignment. 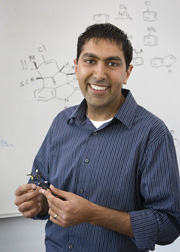 Perhaps none is as creative and inspired as “Alkenes Are Used for These,” an animated video made by Lee, Chuang and Nguyen with help from their friend Maggi Lai, a UCLA student who isn’t in the course but worked on the animation and production. In the video, a student studying chemistry falls asleep and is transported into a nightmarish world where she is tormented by the Joker from “Batman.” Just as death appears inevitable, professor Garg, in a cameo as the Caped Crusader, comes to the rescue, and all is right in the world — until the student wakes up and has to find a rhyme for “ozonolysis.”

Garg suggested that students incorporate a superhero theme into their videos — but Garg himself as superhero? Absolutely, said Lee, a second-year student majoring in microbiology, immunology and molecular genetics who rewrote the original Eurhythmics lyrics for the video. She calls Garg “a real Chem 14D superhero” who makes organic chemistry “fun and not as overwhelming as I can easily imagine it to be.”

Nguyen, a second-year English major who is premed and considering double-majoring in physiological science, said that while she’s a good chemistry student, this is the first chemistry course she really enjoyed. “I feel like Sherlock Holmes when solving retrosynthesis problems.”

Chuang, a second-year biology major, sings lead on “Alkenes” and said this was her first time singing, although you might never guess it. She said she had heard “only wonderful things” about Garg before taking this class, and has found she agrees with them all. “The material is very difficult,” she said, “but Professor Garg breaks it down and makes it simple.”

Another ambitious music video — and one of the favorites of Garg and his teaching assistants — is the energetic “Mashup” by the so-called Chem 14Dreamers: Sayda Hartoonian, Laura Lorenzana, Michael Sianturi and Andy Truong. 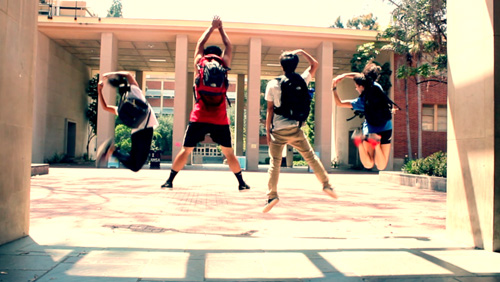 What do the students learn from making the music videos? Nguyen learned a great deal about audio and video editing, and Chuang learned about animation. Lee values the teamwork with her fellow students. And did I mention organic chemistry?

The Chem 14Dreamers’ Truong, a second-year physiological sciences major, said it is now “impossible to get the reaction mechanisms out of my head. I literally dreamt about organic chemistry three nights in a row. At this point, I’m not forgetting those organic reactions, because we made them rhyme.”

‘Alkenes Are Used for These’

Garg, an associate professor of chemistry and biochemistry, “can make the class feel like he’s our best friend but at the same time be a respected mentor,” Truong added. “He runs the class like he knows how our minds work and like he’s tricking me into learning organic chemistry. I know I’m studying more for O-Chem than for my other classes.”

Outside the classroom, Garg also has close interactions with students. He, his wife and their two young children live in a campus residence hall as part of UCLA’s faculty-in-residence program, which allows him to eat meals with students, advise them and inspire them daily with his passion for chemistry.

“I learned that when you enjoy the work you’re doing — and we spent countless hours on this assignment — it really doesn’t feel like work at all, but rather a ton of fun that happens to end in an amazing final product of which you can truly be proud,” said Hartoonian, a second-year biology major who worked on “Mashup.”

Hartoonian said she struggled with Chemistry 14C last year but that Chemistry 14D with Garg is a completely different story. “The way Professor Garg presents and teaches the material is nothing short of perfect. He is fantastic — so lively and funny that I am excited to solve chemistry problems and look forward to attending lectures. After taking Professor Garg’s class, I’m considering switching to a biochem major, an idea I would have laughed at just months ago.”

“We really wanted to make the best video anyone has ever seen, so we gave our all to this project,” Sianturi, a third-year psychobiology major, said of the “Mashup” video. “It was one thing to learn the concepts, but being able to apply what you learned in a creative form was really tough. All the time we spent on the video definitely paid off.”

How does Garg get students to love organic chemistry when many start out expecting it to be a dry series of memorizations?

“One of the reasons I was first attracted to organic chemistry is that it requires analysis and problem-solving — not memorization,” said Garg. He said he views his Chemistry 14D class as largely about problem-solving, and that comes across to his students, many of whom praise him for his sense of humor and his ability to make organic chemistry fun.

“Even though Professor Garg lectures about difficult topics,” Sianturi said, “he turns it into such an enjoyable experience.”

“Professor Garg makes O-Chem extremely enjoyable,” said the Chemistry 14Dreamers’ Lorenzana, a second-year physiological science major. “He’s such a great teacher, and he provides the tools for his students to succeed. His humor enlivens the class.”

In a recent lecture, Garg told the class that when he and his family were moving to campus, his wife found his organic chemistry bluebook from when he was a college student. Garg looked through it, winced when he saw he’d made a simple error and threw it away. The message? I’ve struggled with this too. Don’t get frustrated. You can learn this.

Other video highlights from this year’s include “We’re All Superheroes“ by Winston Chang, Kim-Lim Penelope, Gyunho Kim, and Pope Rodnoi and a video by Haris Akram, Enzo Ignacio, Peter Na and Binal Patel that begins by paying tribute to “Chemistry Jock,” a classic produced by some of Garg’s 2010 students that now has more than 70,000 views on YouTube. Yes, that’s 70,000.

In a class of 380 students, Garg calls on all his students by name. On the last day of class, he greeted the students individually when they entered the class and posed for photos with them afterwards. In between, he told them that organic chemistry is relevant to their lives and improves their ability to reason and problem-solve. He asked the students what they think of organic chemistry now, compared with at the start of the class. Three-fourths responded that they like it more now. Garg told them he has high expectations of them, and that they always rise to the occasion.

At one point, Garg walked away from the blackboard and said, “That’s the last reaction. Heart-breaking. Parting is such sweet sorrow.”

The students gave him a long, rousing standing ovation.

In an interview, Garg said his students this quarter “performed exceptionally well and have done amazing things on exams and extra-credit assignments. The best part about teaching Chem 14D is the opportunity to interact with some of the best and brightest students at UCLA.”

As Eurhythmics sang 30 years ago, “Who am I to disagree?”