If you suspect that opening windows to let in fresh air might be good for you, a new study by scientists at Lawrence Berkeley National Laboratory (Berkeley Lab) has confirmed your hunch. Analyzing extensive data on ventilation rates collected from more than 150 classrooms in California over two years, the researchers found that bringing classroom ventilation rates up to the state-mandated standard may reduce student absences due to illness by approximately 3.4 percent.

With this reduction in student absence, California’s school districts would gain $33 million annually in attendance-linked funding and families would avoid an estimated $80 million in caregiver costs due to having a sick child at home. In contrast to these large potential benefits of raising classroom ventilation rates, the associated energy costs would increase by only $4 million annually.  “Our overall findings suggest that, if you increased ventilation rates of classrooms up to the state standard, or even above it, you would get net benefits to schools, to families, to everybody, at very low cost,” said Berkeley Lab scientist Mark Mendell. “It’s really a win-win situation.”

The findings were published in the journal, Indoor Air, in an article titled “Association of classroom ventilation with reduced illness absence: a prospective study in California elementary schools.” Mendell was the lead author. His co-authors were Ekaterina Eliseeva, Molly Davies, Michael Spears, Agnes Lobscheid, William Fisk and Michael Apte, all of Berkeley Lab. It is the largest U.S. study to date to look at ventilation rates in classrooms. 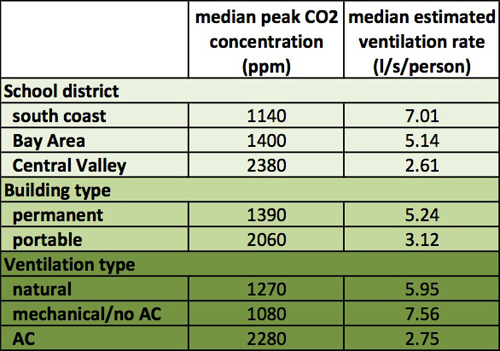 The Berkeley Lab scientists collected data from 162 3rd, 4th and 5th grade classrooms in 28 schools in three California school districts in the Central Valley, the Bay Area and the south coast. They found that more than half of the classrooms did not meet state ventilation standards. California building codes require schools to provide a ventilation rate of 7.1 liters per second per person, or about 15 cubic feet per minute per person, which is also the California standard for offices and retail stores, assuming the default occupant density. (The ventilation rate is a flow rate, measuring how much outside air is brought indoors, whether through natural ventilation, such as open windows, or mechanical ventilation, using ventilation system fans.)

The study found that ventilation rates varied widely across the districts, within districts, and even within schools. Portable classrooms, on average, had less ventilation. In the Central Valley, where temperatures are more extreme in both summer and winter, so that all classrooms are air-conditioned and windows are closed and ventilation rates kept low most of the year to save on heating and cooling costs, ventilation rates were below the state standard 95 percent of the time. 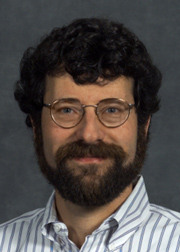 School districts provided data on daily absences due to illness for each classroom. The researchers calculated ventilation rates based on measured carbon dioxide levels indoors and estimated levels outdoors. “You can think of CO2 as a tracer gas,” Mendell said. “Occupants emit CO2, then by doing some calculations we can figure out how much outdoor air ventilation the room has.”

Indoor CO2 levels were based on readings from an environmental sensor in each classroom that measured carbon dioxide levels as five-minute averages. The data was transmitted via Internet to the researchers. “This new device is what made this study possible,” Mendell said. “In the only previous study, they took measurements on just one day in each classroom and assumed it was the same for the whole school year. In this study, we could measure every day all year in hundreds of classrooms without having to travel there each day.”

The overall finding from all three districts was that for every additional 1 liter/second/person of ventilation provided to a classroom, illness absence declined by 1.6 percent, with the benefit continuing at least up to 15 liters/second/person, more than double the state standard. “It turns out 1.6 percent fewer absences is very important when you’re talking about lots of people,” Mendell said.

The researchers extrapolated that finding using two assumptions: that the findings represented true causal relationships and that all K-12 classrooms in the state have the average ventilation rate of 4 liters/second/person estimated from carbon dioxide data from a prior state-wide survey. They calculated that raising all classrooms to the state standard of 7.1 liters/second/person would reduce illness absence by 3.4 percent and increase overall State funding to schools by $33 million. (California schools receive roughly $29.50 a day in funding for every student who attends on a given day.) Further increases in ventilation rates, at least up to 15 liters/second/person, would result in additional benefits.

The researchers noted there were likely other benefits not included in the study, such as reduced costs related to sick leave for teachers and staff and reduced health care costs for students. They also noted that, in most parts of California, replacing ventilation equipment would probably not be necessary to increase the ventilation rates.

However, the researchers don’t know how or why poor ventilation results in more illness absences, or if there is even a causal connection. “We saw a correlation, but we don’t know if it’s directly causal,” said Mendell, who is an epidemiologist.

Still, the Berkeley Lab researchers found that the correlation between ventilation rates and illness absence was consistent across school districts, climate zones and ventilation types.

“We speculate that perhaps chronically poor ventilation exposes you to more of the chemicals and irritants inside classrooms, such as from building materials, furniture, equipment and cleaning products, and maybe that chronic exposure makes you more susceptible to getting respiratory infections,” Mendell said.

He said they hope to do further studies that include students of other ages, different climate zones, more specific data on illness type and the effects of outdoor air pollutants, which were not included in this study. A follow-up paper on the effects of ventilation rates on test scores is expected soon.

This study was supported by funding from the California Energy Commission.